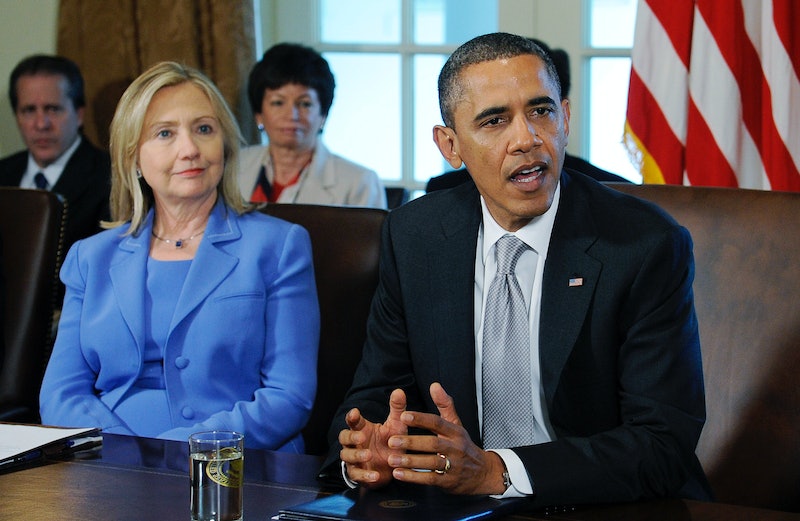 During an interview with ABC News, broadcast on Sunday, President Barack Obama praised Hillary Clinton, his former secretary of state and potential 2016 presidential frontrunner. But it was more than the standard compliment: Obama not-so-subtly teased Clinton's 2016 presidential run — or at least, that's what it sounded like. It wouldn't be too far out of the realm of possibility, considering that Clinton has said recently that she'll announce her firm decision by 2015. Ready for Hillary? Obama surely is.

The president told ABC News chief anchor George Stephanopoulos in an exclusive interview with The Week:

You know, I think the American people, you know, they're gonna want, you know, that new car smell. They want to drive something off the lot that doesn't have as much mileage as me.

So, is that strange new car analogy directed at Clinton, his former opponent-turned-colleague? Obama was a bit evasive when asked about Clinton's 2016 presidential run, because, as the president said, "she hasn't announced [it] yet." He also admitted that there were "a number of other possible Democratic candidates" who would be fit for the job. However, there's perhaps no greater contender than his former secretary of state. On whether Obama would support Clinton's run or not, the president said:

She hasn’t announced so I don’t wanna jump the gun. I can tell you a couple things. Number one, she was an outstanding secretary of State. Number two, she’s a friend. ... Number three, I think she — and a number of other possible Democratic candidates — would be terrific presidents. And I am very interested in making sure that I’ve got a Democratic successor. So I’m gonna do everything I can, obviously, to make sure that whoever the nominee is is successful. If she decides to run, I think she will be a formidable candidate and I think she’d be a great president.

In between discussion of 2016, being a lame-duck president and the upcoming Iranian nuclear negotiations, Obama also shared a few words on the unfolding situation in Ferguson, Missouri, where residents are anxiously anticipating the grand jury decision on police officer Darren Wilson. The young, white officer fatally shot 18-year-old Michael Brown, an unarmed African-American Ferguson resident, in broad daylight on Aug. 9. The case compelled the Department of Justice, under the leadership of outgoing Attorney General Eric Holder, to open two federal investigations in Ferguson, one on Brown's death and the other probing the city's police force for possible civil rights violations.

Obama, who has spoken candidly yet sparingly about Brown's death and what it's like to experience racial discrimination as an African-American man in America, told The Week:

Obama also urged protesters to keep demonstrations "peaceful," adding that America "is a country that allows everybody to express their views." The president said he has called Missouri Gov. Jay Nixon to ensure that peaceful protesters will be protected from violence, and that law enforcement should be able to "sort out the vast majority of peaceful protesters from the handful who are not."