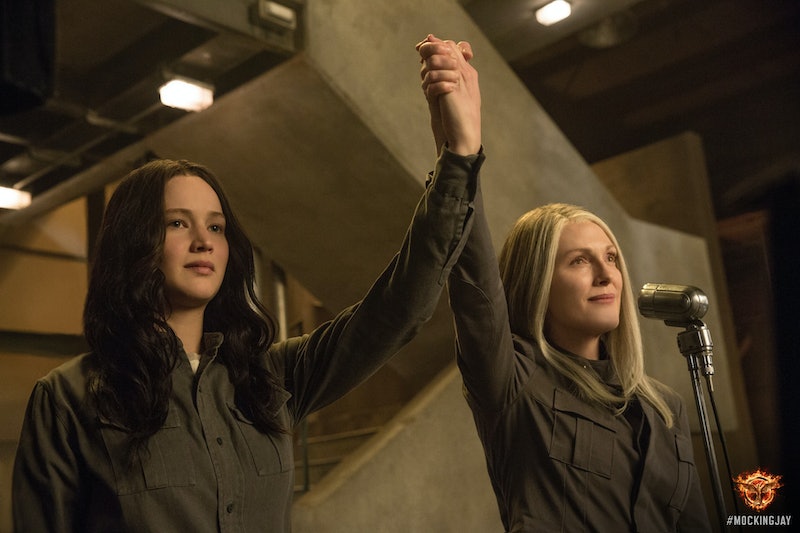 The wait has begun for The Hunger Games: Mockingjay — Part 2 because Mockingjay Part 1 is out and it is glorious. Not only did Mockingjay beat everyone at the box office over the weekend, but it was also well worth the wait considering the absolutely amazing acting that was provided by Liam Hemsworth, Jennifer Lawrence, Josh Hutcherson and — well, who are we kidding? The whole cast was on point. If you ask me, the movie was over too soon and really didn't need to be split up into two parts, but I understand that money greases the wheels of Hollywood and am prepared to wait for Part 2. However, while I was watching Mockingjay, I couldn't help but be reminded of other, similar movies.

I'm not saying that Mockingjay is derivative. We don't need to have the "The Hunger Games vs. Battle Royale" fight again, not this late in the game. Besides, every story is at least partially derivative; it's what you do with the same old story elements that count. All I'm saying is that if you enjoyed Mockingjay, then there are some other films that share some of the same elements that you might enjoy just as much. Well, not just as much because these films are lacking in Lawrence, but here are some movies that might give you Mockingjay flashbacks. Or vice versa.

Katniss singing "The Hanging Tree," which later becomes the song of the rebels, reminded me of almost every single part of Les Mis, to be honest. Although, that's to be expected considering just how much these two films have in common. They both take place during a time of war and rebellion, dealing with the horrors and complications thereof, where the underprivileged are feeling oppressed and angry. And musical — you know, considering they keep singing about it.

The moment where Katniss, dressed in full Mockingjay attire, boards the plane with Gale in tow reminded me of a similar scene in The Avengers when Captain America boards a plane with the other Avengers to go and save New York. "Son, just don't" is a better one-liner than Katniss' tense, awkward silence when asked if Gale looks good all suited up, but they were both pretty dramatic moments.

A hijacked loved one who resurfaces only to try and kill you? Repeatedly? Yeah, Peeta and the Winter Soldier, a.k.a. Bucky Barnes, would have a lot to talk about. Luckily for Captain America and for Katniss Everdeen, they're both going to get better. We just need to wait for the next movie.

Hey, it's not just because of the love triangle — although Twilight did present us with one of the most famous ones. The fact that Mockingjay had so many composite, or ignored, characters reminded me of Twilight. Anna Kendrick's Jessica Stanley was given an expanded role as a mix of Jessica from the books and Lauren Mallory, another classmate of Bella's that never appeared in the movie. Similarly, Effie fills the role of Fulvia and Katniss' prep team, as her mentor in the Mockingjay propaganda campaign.

When Katniss returns to District 12 and gets to see what an absolute mess the Capitol made of her home, and especially the part where she sees all of the destroyed buildings and dead bodies, I am reminded very much of the aftermath of the Battle of Hogwarts in Harry Potter and the Deathly Hallows — Part 2. Hogwarts was the only home that Harry had ever known and it was absolutely destroyed in the war. I think he and Katniss could feel each other's pain on this one.

8. The Mortal Instruments: City of Bones

Sorry, but Katniss being escorted everywhere by a bunch of black-clad people she just met who are covered in weird tattoos gave me heavy City of Bones déjà vu. Ironically, City of Bones also has a love triangle that was kind of over before it began. Much like Gale, Clary's friend Simon was pining away, madly in love with her, while she was focused only on Jace — her Peeta — for the whole movie. Sadly, Jace is no Peeta.