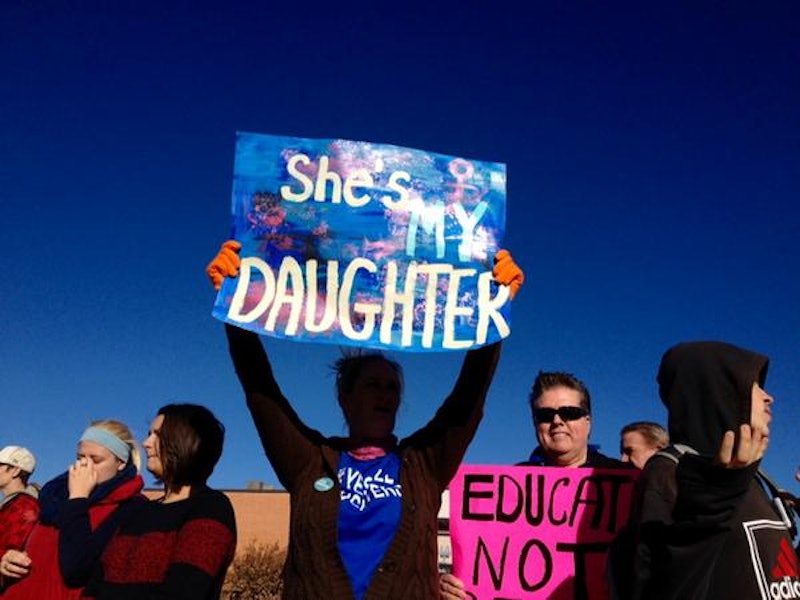 On Monday, a group of Norman, Oklahoma, high schoolers staged a silent walk out of Norman High School as part of the Yes All Daughters campaign, an antibullying and antirape movement organized by students after allegedly watching the school turn its back on one of their classmates.

Spinning off of the Yes All Women social media campaign, Yes All Daughters seeks to bring awareness to the frequent bullying that rape victims face. Last September, a 16-year-old student at Norman High School was allegedly raped by another student. The assault was taped and passed around the school, and the victim faced bullying to the point that she was unable to attend school. Two other victims have alleged that they were raped by the same assailant.

The group organized a peaceful walkout at Norman High, posting protest do's and don'ts on its Facebook page. Students and supporters are asked to wear blue or teal in support of antibullying and antirape efforts.

Protest Do(s) and Don't(s) are below. Please read, share and print if you plan on attending. Thank you for the support!Protest Do(s) and Don’t(s)For Local Community Members:DO Join us if you are able between the hours of 9:00 am to 4:20 pm. We will be welcoming students at 9:20 am.For Students:DO Stand up silently at 9:20 am and walk in an orderly fashion and using crosswalks to join the protest. Please do this in silence in honor of the victims.For Everyone:DO Self-Police, Be a Good Neighbor*Self-policing means if you see someone doing something you think is improper, confront them politely and ask the person to refrain. If they do not, contact an organizer so that the organizer may attempt the same. If the behavior continues after that, then the organizer should go to the police and inform them of the problem so that the police may then attempt to get the person to refrain.DO Be Peaceful, Law-Abiding Citizens that do not disturb local businessesDO Be courteous and treat everyone with respectDO Contact an adult organizer if there is an issueDO Park legally and use crosswalksDO Stay on public property and sidewalksDO Bring appropriate signageDO Bring water, food, and sunscreenDO Wear teal/blue if you canDO RecycleDo NOT Bully (no bullying the bullies)Do NOT Make personal attacks nor threatsDo NOT Use profanity Do NOT Respond to any negativityDo NOT Obstruct trafficDo NOT Wear masks and/or face paintDo NOT Litter

At a press conference last Thursday, student organizer Danielle Brown stood with her mother and her aunt as she laid out Yes All Daughter's mission:

We appreciate the momentum our movement has gained, but it is worthless without change. We hope that our effort shines a spotlight on bullying and that Norman High takes steps to ensure victims can go to school safely.

The 18-year-old alleged assailant has reportedly been suspended from school, not because of the rape allegations, but because of the video that showed him penetrating one of his victims.