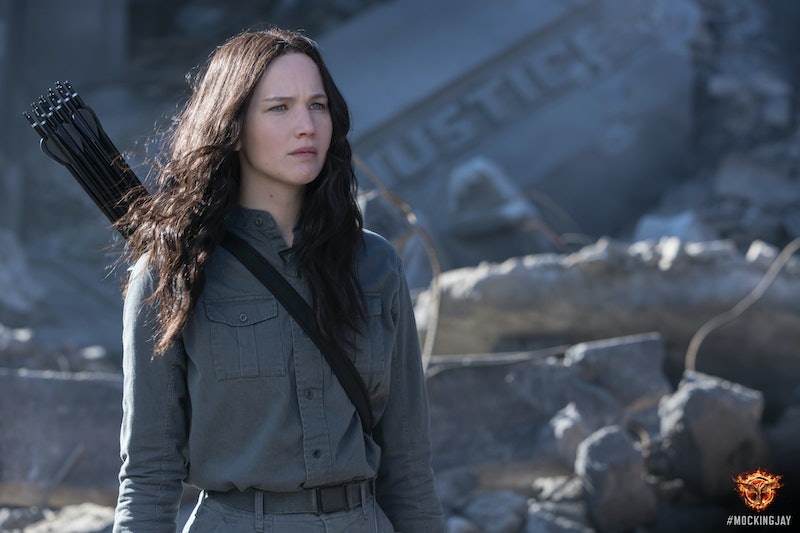 After what feels like years of waiting, The Hunger Games: Mockingjay — Part 1 is finally in theaters and the adventures of Katniss Everdeen and the rebellion in Panem continues. The film, for those who haven't seen it yet, is absolutely brutal on one's emotions. Prepare to come out of that theater not only depressed, but also vaguely angry at the abrupt cliffhanger of an ending. (Spoiler alert: Josh Hutcherson's performance as Peeta in Mockingjay will literally leave you breathless.) However, if you're sadly counting down the days until The Hunger Games franchise is over, here's some good news for you. According to director Francis Lawrence, they're open to the idea of more Hunger Games films. And I'm sorry to say, Hunger Games fans, that this is a terrible idea.

That's nice and everything, but no. I know Twilight is coming back with a series of short films and Harry Potter has the Fantastic Beasts and Where to Find Them film on the way, but the Hunger Games franchise needs to end with Mockingjay. In fact, let me give you eleven solid reasons why.

1. You will never find a better protagonist than Katniss.

You can't just take Katniss out of The Hunger Games and call it The Hunger Games. She's literally the whole movie. Even the compelling side characters pale in comparison to Katniss, who has inspired hairstyles and the next generation of feminists. And, as Scott McCall of Teen Wolf can attest to, being the most beloved character in your own franchise is hard.

2. I can't go through this emotional trauma twice.

Between the actual Games, Rue's death, Gale's whipping, Peeta's capture — and all that is still yet to come in Mockingjay Part 2, how can you really ask me to put my emotions through all of this again for another series of films? Panem has left my psyche battered and broken. I have nothing left for other films.

Even though we know who ultimately stands victorious in the Team Peeta vs. Team Gale debate (we know by the end of Mockingjay Part 1, in fact, if we didn't know before), fights between the two camps get just as vicious as Team Edward and Team Jacob fights. Asking a new generation of Hunger Games fans to fight over two more guys is just asking for trouble.

4. There are no more books to adapt.

Like, that's it guys. Suzanne Collins only wrote three books and you somehow managed to stretch that into four movies. They weren't even long books, like the Harry Potter series. Let it go.

5. We've gotten every perspective that matters.

6. There can only be one Mockingjay.

Even if you don't like Katniss, she's the one who is the symbol of the rebellion. She's the one that matters. Her face, her voice, her actions, they matter. Taking the focus off of Katniss to focus on someone who isn't the Mockingjay is basically telling the audience that there's someone else out there affecting the story better than your protagonist. Not a very good story.

7. Nobody wants to go back to the Arena.

In and out of the films, no one wants to go back to the Arena. There's a reason that Mockingjay Part 1 and Part 2 are less about the Games and more about the civil war; if I have to watch a bunch of children kill each other brutally all over again in a new franchise, I may just cry. And even if we don't go back to the Arena, that might still happen in the civil war. Lose/lose.

No Katniss means no Jennifer Lawrence. You want me to watch a Hunger Games movie that doesn't have Lawrence in it? Pass.

9. I've had enough of love triangles.

While we're on the subject, I'd really like it if all books and movies put an end to this whole love triangle thing. The original Hunger Games trilogy started a precedence of them in this universe and I don't need to see another one happen. One guy and one girl can have just as many obstacles in pursuit of a relationship without adding another guy in there, you know?

I'm not saying that Pacific Rim should be expanded into many movies — except I totally am. Look, all this time we're spending thinking about expanding a complete franchise of four movies past its expiration date is all time we could be spending creating new franchises or expanding on single-film franchises. I don't need any same old, same old at the box office.

I can't deal with that again. Mockingjay Part 2 should end this series, thanks.