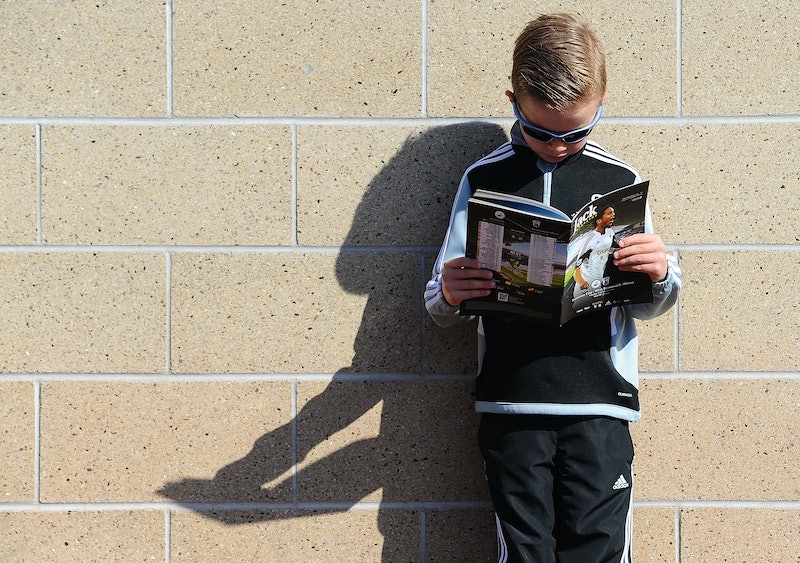 You would think that most people would be happy with the progress that the "Let Books Be Books" campaign has been making lately — breaking down the gender binary in children's books is always a good thing. Well, not exactly. Some are unhappy with the push for "de-gendered" titles, namely author Hal Iggulden, co-author of the bestselling Dangerous Book for Boys. After his publisher Ladybird Books announced that they would be discontinuing their books that reference gender-specific audiences in the titles, including, presumably The Dangerous Book for Boys, Iggulden called the move "po-faced and stale." ("Po-faced" = "humorless and disapproving," according to Internetland.)

"For Ladybird to give up these titles is unfortunate, and they are doing nothing more than pandering to a vocal pressure group," Iggulden told Breitbart London. "The vast majority of boys want to read boy things, and girls want to read girl things. Gender neutrality is a ridiculous theoretical concept; gendered books don't hurt children or restrict their development."

Of course, this all could just be a case of sour grapes — Iggulden is perhaps just mad that his book won't be reprinted, or that it might be reprinted without being labelled as "For Boys." But on the other hand, this is also an interesting snapshot of people who do support the rigid reinforcement of the gender binary in children's books.

The people speaking out against gendered titles are not just a "vocal pressure group" that can be dismissed so easily. They're people who don't want to see books — which should be vessels for expanding children's horizons — to instead instill in them restrictive, limiting, and frankly inadequate ideas about gender. And if "the vast majority of boys want to read boy things, and girls want to read girl things," it's probably because we've already started programming them to respond to those labels. That isn't actually a reason to reinforce the labels via books.

I also simply reject the notion that this idea about "the vast majority of boys" reading mostly "boy books" is even accurate. I mean, just because we project our assumptions about what children want onto them, that doesn't actually mean children conform to those expectations. Children do their own things.

Most of all, though, I don't understand how Iggulden and those who agree with him can possibly state that "gendered books don't hurt children or restrict their development." After all, the unnaturally rigid gender binary these books enforce is... well, unnaturally rigid. How is that not detrimental to children's development?

Ultimately, Iggulden and those who continue to cling to outdated, artificial, limiting ideas about gender are really just trying to stand in the way of progress. There will come a day when people are allowed to be people and children are allowed to be children, regardless of how they may relate to whatever gender identity they have — and for the record, there are more than two. And you better believe that books will be a part of that.

More like this
16 Novels That Paint A Realistic Portrait Of Abortion
By K.W. Colyard
Aesop's Queer Library Is Open
By Tomi Otekunrin
5 Gripping Books To Read From Women’s Prize For Fiction Winner Ruth Ozeki
By El Hunt
Sparks Fly Fast & Furious In 'Honey & Spice'
By Bolu Babalola
Get Even More From Bustle — Sign Up For The Newsletter