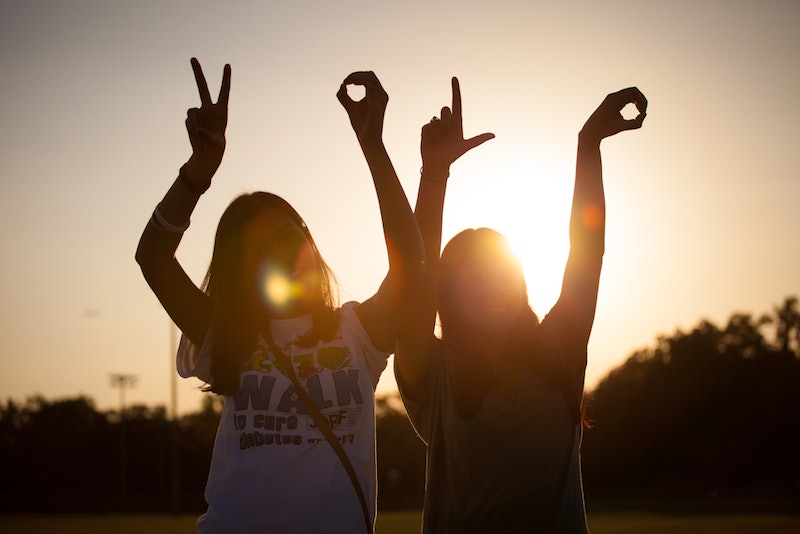 Recently, I was scrolling through my Facebook feed when I saw a post on my high school acquaintance’s wall: “We will all miss you and your beautiful smile Mary.” Though I hadn't spoken with Mary in a year and a half, I clicked. Her timeline was filled with eulogies, photos, memories. She was a college sophomore — just like me. I wasn't sure, but based on my knowledge of university culture, I assumed that her death was either alcohol-related, a suicide, or both. It was pure projection, but surprise didn't factor in when the mystery melted away and I learned that she had indeed taken her own life.

As I sat in my bed internalizing the notion that Mary was gone from more than just the Internet, I pictured her teenage self with a dimply grin, caramel hair, and pastel shorts. I had moved to our disgustingly competitive high school when I was 15; up until then, I had been homeschooled. During my first few weeks at Westlake, until I eased into the roar and jumble that is a public education, my hands shook with nerves as I tiptoed through the halls. It would take months to find real friends, and years for anyone to stick around. Mary was one of the first people there to be kind to me — that weird, awkward new girl who had spent more hours in a dance studio than at a lunch table.

I'm not the only one; an epidemic of angst and exhaustion is tricking collegiate millennials into self-destruction. The fact that we only live once, and can live fast enough to die young, has become a blessing.

We were in French class together, and she was the star. Our teacher would post the “grosse tête”— the name of the student with the highest score — on the board after every exam. Mary's French II and III honorific, Marie, would almost always make an appearance. My tag soon joined hers, but we were never petty about it.

When she had back surgery, I helped carry her bag. She had an easy exuberance that made me feel like everything would be okay, even when I was anxious or afraid. She was instinctually a nurturer, and she seemed to take care of the entire school, especially the underdogs who needed support. Perhaps she could relate because she was already struggling herself. As an outsider looking in, I couldn't tell. All I remember is that she handed out smiles like candy on Halloween.

After I read many a tribute to Mary splashed on social media’s blue and white page, I opened up a chat window. My best friend from high school, 562.4 miles away, was also online. We messaged for a while, sharing our shock. She and I agreed that a box on the screen wasn’t enough, so I called. She cried. I wanted to, but I had cried enough for one day.

“Do you think it was suicide?” I asked.

“That’s the sad thing. I don’t think it’s too uncommon for us to think about it. I mean, I’ve considered it.”

“I’d be devastated if anything ever happened to you.”

On my cell, another high school friend dealt with news of Mary’s death with a different coping mechanism. “I’ll just drink a lot,” he texted from a party. Everyone was expecting him to be his bubbly, bright self, and he couldn't disappoint.

According to a 2011 study by the American College Health Association, out of 100,000 students, about six will commit suicide and three will suffer “alcohol related traffic deaths” per year. That may not seem like a lot, until the people you know start disappearing.

They disappear in different ways. I'm a student at Columbia University, and just this semester, two colleagues in my immediate circle decided to take a break from their academic careers. Even more high school classmates have dropped out of college to return home.

My generation is burnt out and drowning. Everything’s so fast, and it all seems to matter so much. If we don’t get this grade then we won’t have that GPA, and we won’t get this internship and have that résumé builder. Meanwhile, this club demands that much time. This friend needs that much attention.

Ironically, the YOLO mentality is part of it, too. We grew up in an era when the United States realized it wasn’t invincible and domestic attacks like 9/11 were within the realm of possibility. The world we populated as children was already going through PTSD, and we can’t remember when paranoia wasn’t the status quo. As we grew up, songs with lyrics like "let's make the most of the night like we're gonna die young" became favorites for raves and ragers. Throw in a few fake gang signs and a bottle of vodka, and you’ve got yourself a new profile pic.

It’s 1 a.m. on a Saturday as I write this, and most of my peers are out right now, getting trashed. I wasn’t in the mood tonight — I haven’t been since a rowdy evening in Bolivia last July. As I stumbled into a taxi in La Paz, whirling from Singani and the thrill of escapism, I haggled with the driver while he quietly laughed at me, the American in his back seat. My hair smelled of cigarettes, and when I tucked inside the apartment where I was staying, all I wanted was to curl up with Netflix.

When I tried to down a shot a few weeks later, I almost vomited on my then-love interest. My instinct to evade manifested itself through penchants for anything that could help me forget the pressures in my life — books, papers, relationships, depression, expectations — and it was literally making me sick. I'm not the only one; an epidemic of angst and exhaustion is tricking collegiate millennials into self-destruction. The fact that we only live once, and can live fast enough to die young, has become a blessing.

For a moment, I've stepped off the hamster wheel to breathe. No booze or brain-numbing. I'm as ravenous as ever for success, but I'm trying to redefine what that means for me. I look at an image of Mary and feel the jolt of losing another one of the good kids. Glancing around my hole of a dorm room, I promise myself that I won't be the next to go.

More like this
Why You're Seeing Green Bandanas At Abortion Rights Protests
By Lexi Inks
How To Come Out Online, According To Trevi Moran
By Melanie Mignucci
How To Tell If Your Partner Has A God Complex, According To Experts
By Madeline Howard
Are Cancer & Cancer Compatible In A Relationship?
By Kristine Fellizar
Get Even More From Bustle — Sign Up For The Newsletter