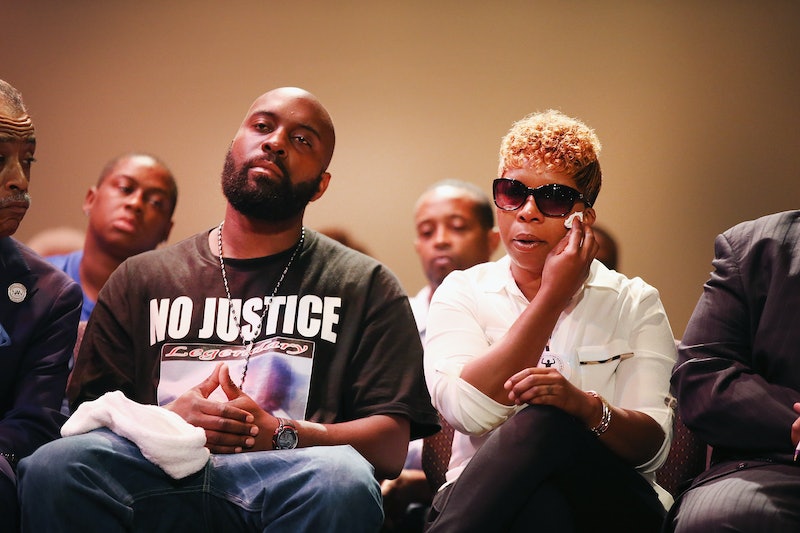 Minutes after St. Louis Prosecuting Attorney Bob McCulloch announced police officer Darren Wilson was not indicted by a grand jury, Michael Brown's family released a statement about the decision, calling Wilson "the killer of our child." Wilson walked free three months after he shot and killed Brown, an unarmed 18-year-old, in Ferguson, Missouri, kicking off a series of protests that brought national attention to the racial unrest in the suburb. And though many expected unrest to continue in Ferguson following the announcement Monday, Brown's family continued to call for peace in the community, despite their strong words. As the Brown family statement, signed by Lesley McSpadden and Michael Brown, Sr., read:

We are profoundly disappointed that the killer of our child will not face the consequence of his actions.

While we understand that many others share our pain, we ask that you channel your frustration in ways that will make a positive change. We need to work together to fix the system that allowed this to happen.

Join us in our campaign to ensure that every police officer working the streets in this country wears a body camera.

We respectfully ask that you please keep your protests peaceful. Answering violence with violence is not the appropriate reaction.

In the minutes following the release of the Brown family statement, it certainly seemed like protestors were listening. Video footage on the streets of Ferguson showed gathered protestors speaking out against the decision, but not taking part in any violence. That said, as minutes began to pass, it seemed tensions were rising, with protestors destroying a police car.

But those hoping for change in Ferguson can expect the Brown family to continue to attempt to make a difference. The Browns, who called for a moment of silence lasting four and-a-half minutes following the grand jury announcement, will talk about the decision at a press conference Tuesday, and a petition requiring police officers to wear cameras (as referenced in the family's statement) has attracted over 150,000 signatures.

It's an incredibly brave response considering the circumstances. The Brown family has been at the center of the Ferguson protests since their son was killed, and representatives for the family have outlined just how they have suffered watching the violence that followed. Said family attorney Anthony Gray to MSNBC, "Each day it seems to get worse for them ... Because each day or each event or turn of events it just seems to just take the dagger and drive it even deeper in the heart of this mother and the father.”

And the dagger will go deeper following the grand jury announcement, particularly following McCulloch's words about Brown. Asked by a reporter what he would say to the Brown family if they were present for the announcement, the prosecutor responded, "Regardless of the circumstances, they lost a young man ... the pain that goes along with that loss is something that people can't understand. But at the same time, everything was presented. Everything was given to the grand jury and it was all put in front of them."

The prosecutor might have also insisted that the discussion surrounding racial tension in the community must continue, that's no doubt not quite the response that the Browns, and those demanding justice, would hope for.

More like this
The Families Of Grenfell Tower Are Still Waiting For Justice, Five Years On
By Bustle UK
The Most Powerful Photos From The Weekend’s Abortion Rights Protests
By Melanie Mignucci
Why You're Seeing Green Bandanas At Abortion Rights Protests
By Lexi Inks
5 Ways To Stand In Solidarity With Women In America From The UK
By Sophie McEvoy
Get Even More From Bustle — Sign Up For The Newsletter