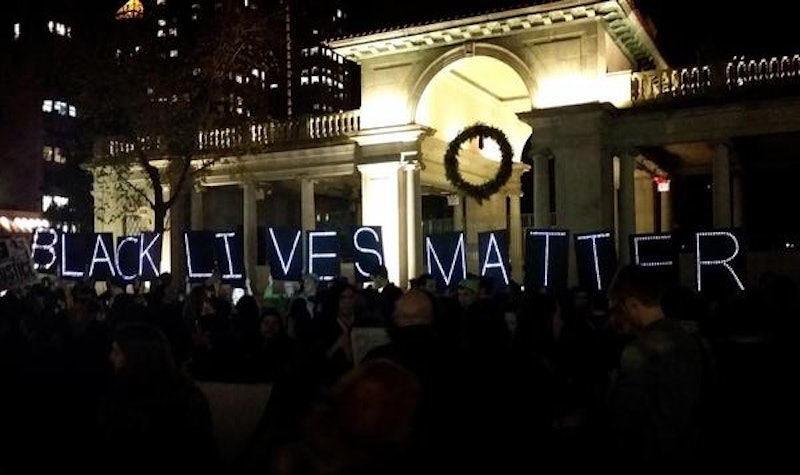 On Monday, hundreds of protestors gathered outside the Ferguson Police Department to hear that the grand jury had decided not to charge Darren Wilson for killing unarmed 18-year-old Michael Brown in August. And when the crowd heard the decision, it was angry. Shocked. And, based on the fact that the crowd did not disperse, ready to continue to call for change. But the anger extended beyond the suburbs of Missouri. Because protests against the decision and the killing of Brown took place across the nation.

Protestors on the West Coast, the East Coast, and beyond assembled Monday night ahead of the decision to show support for the community, which has faced violence and strife following Brown's death. And, once St. Louis prosecuting attorney Bob McCulloch announced the grand jury's decision, claiming, "the statements of all witnesses were challenged by the prosecutor, by the police and by the grand jury members themselves. Physical evidence doesn’t change," demonstrators only continued to show solidarity for those in Ferguson.

While those on the ground in Ferguson dodged tear gas where authorities claiming protestors were unlawfully gathered, those in San Francisco, New York, and more held strong with peaceful demonstrations backing Brown supporters. Here are just a few images from demonstrations across the U.S.

More like this
The Families Of Grenfell Tower Are Still Waiting For Justice, Five Years On
By Bustle UK
17 Powerful Photos From March For Our Lives Protests Across The U.S.
By Michelle Toglia
5 Concrete Ways To Take Action Against The Rwanda Deportation Plan
By Rachel Mantock
How To Fight For Reproductive Rights, Based On How Much Time You Have
By Courtney Young
Get Even More From Bustle — Sign Up For The Newsletter