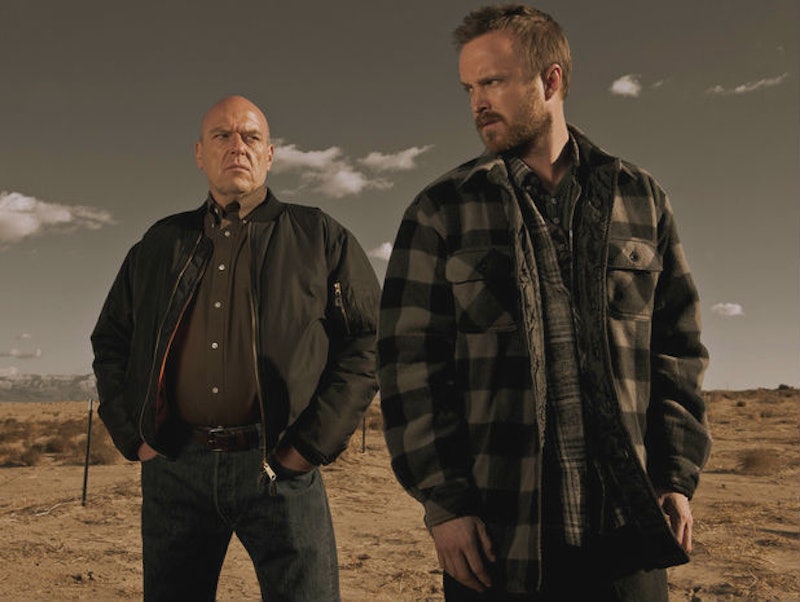 With just three episodes left and three main characters stranded in the middle of a close-range shootout, fans are left wondering who's going to die on Breaking Bad. Jesse, Walt, and Hank are hunkered down in the desert, withstanding a barrage of bullets from Todd's seedy Uncle Jack and his band of violent cohorts. Someone's got to die, or Breaking Bad's brand of realism is about to fly out the window, and that someone is Hank.

But I'm not one to throw out a theory without fulling backing up my case. The evidence is stacked against Hank and while Vince Gilligan and crew are geniuses who manage to surprise us at every turn, this potential plot twist is more necessary than Walt Jr.'s daily breakfast ritual.

EXHIBIT A: THE SHOOTOUT HAS TO KILL MORE THAN ONE PERSON

With four people facing off against Uncle Jack's hooligans — Gomie, Jesse, Walt, and Hank — we cannot have only one person die. It's already going to be wildly unrealistic when Walt (who has to survive because he's the reason the show exists and because we've already seen him in a handful of flash-forward scenes) isn't killed in the bullet-riddled SUV in which he's crouched.

It's also going to be unrealistic when Jesse, who can't die yet because that would cut off the most integral relationship on the show before it's run its course, survives by hiding behind Walt's Charger. That leaves two people who then must die to balance out the miraculous survival of Breaking Bad's dynamic duo.

That means that Gomie is definitely a goner. All season, his job has been to act as Hank's bumper rails, keeping his rage from sending him off into the gutter and making sure his investigation is on track. Now that Hank has Walt, his money, and Jesse, he could theoretically continue without Gomie even if he survives this shootout.

Steven Michael Quezada, the actor who plays Gomez and didn't even get a spot in the Season 5 cast photo, has also been on a bit of a press tour doing Q&As with publications like Rolling Stone and serving as the main Breaking Bad ambassador on last Sunday's Talking Bad. It could be that Steven Gomez is about to become a bigger character, but with only three episodes left in the entire series and a legion of machine guns aiming at him, it's more likely that all this attention is more of a swan song.

That leaves Hank, and based on the math above, he needs to go.

The simplest harbingers of Hank's doom are of course, the hints dropped throughout the episode "To'hajiilee." First and foremost, there's the phone call Hank makes to Marie before Uncle Jack arrives. (I'll pause for a collective "duh.") The most obvious signs are the fact that he tells Marie "It's over" and his assertion that he won't be home for a while. These are classic dramatic hints.

Secondly, Marie has been wearing black for the past few episodes instead of her signature purple. She's changed colors only a few times, and in those instances, she opted for purple's natural complement, yellow. Most notably, Marie wore yellow during the celebratory backyard barbecue where Hank had his toilet-bound discovery of Walt's guilt. Her sudden switch to black cannot be arbitrary. And while the color pink is theoretically Breaking Bad's signal of death, Marie has a color code all her own. It would make sense that she would don a different color than other characters whose fates are grim.

And then there's this tweet, which is likely referencing Betsy Brandt's immediate leap to The Michael J. Fox Show post-Breaking Bad and not the potential fact that Hank's time is up this week, but we need a brief moment of levity before this theorizing continues. It's about to get grim.

Finally, Hank just got his satisfaction. He caught Walt himself. He tricked a genius. Anything beyond this point is just paper work. This is his masterpiece. His story is, for all we know (don't forget that part where Gilligan is a genius), complete. If he were to die, it would only serve up more fruit for the other characters.

EXHIBIT C: HANK'S DEATH WOULD BE A GREAT PLOT THICKENER

A big reason watching Hank capture Walt in the fourth-to-last episode is that it raises questions of where the series could possibly go once Walt is in custody. If he was left to rot away in a cell, the action would certainly fall upon the other characters, but Walt is the anti-hero who drew us all in. He can't spend the last three episodes in jail. Something has to keep him from the clutches of the law. Enter the shootout.

Let us also consider that Walt is in handcuffs in a locked car. He cannot escape if Hank is able-bodied and ready to stop him. At the very least, Hank will need to be injured so badly that he has no hope of stopping Walt's escape. This leaves the possibility that Hank could wind up spending some in the hospital, but if Gomez is dead (as I've suggested) and Hank is potentially mortally-wounded and no one on the force knows where they are, Hank is bleeding out in the desert — that is, if he gets shot, and we've already decided that he must to save Breaking Bad's cred.

If all of these events occur and Hank is left bleeding on the ground in the middle of nowhere, a few scenarios may play out:

EXHIBIT D: IT'S ALL ABOUT JESSE IN THE END

In any situation that leaves Jesse and Walt alive (which we've deemed mandatory at this point) and Hank and Gomez dead or dying, the story then moves past the concept of law versus disorder. Instead, Walt's fate is left in a lawless realm where the biggest and most important questions lie between him and Jesse and not between Walt and a jail sentence.

We already know Walt is free thanks to the flash-forward, so jail time doesn't seem to be in his future. And after four and a half seasons of Walt's transgressions against Jesse and his twisted, deep love for the troubled ex-dealer, it's only right that the series center its final conflicts on the duo at its core. At the very least, the truth about Walt's hand in Jane's death needs to come to light.

As to how that will come about, that's a seemingly unsolvable puzzle for the Breaking Bad writers that I'm not even going to attempt to unpack, but that uncertainty is actually what's so exciting about the remaining episodes. How will the truth come out? And almost more importantly, how will Jesse react? Will his rage be self-facing? Will he turn his anger on Walt? Or Walt's family?

The thrill here is no longer "Will Walt evade the law?" The Breaking Bad realm is far too wide for fate to lie predictably between cops and criminals. Justice will be sought outside of the law — it's the only way. After all, Walt eventually becomes a vagabond, arranging bacon on his lonely birthday breakfast at some nondescript Waffle House ripoff in the middle of nowhere. The question is: Will Walt make it to his strange-flash-forward exile without consequences — and the most dire consequences for Walt would be losing his family and losing Jesse completely.

Those are the factors that need to play out in the following weeks, not Walt's escape from the DEA. Hank is a worthy adversary, but now that we're almost to the end, he needs to clear a path for our main conflict.