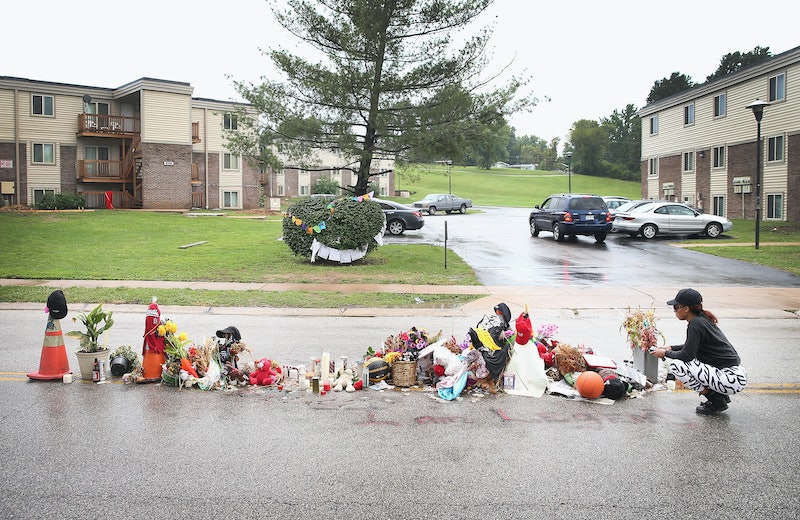 After months and months of waiting, the decision finally came down Monday — a St. Louis county grand jury declined to indict Ferguson police officer Darren Wilson for the shooting death of 18-year-old Michael Brown, setting off a series of protests which raged overnight. The documents from the proceedings have now been released, granting some insight into the fatal encounter that's galvanized a community and a nation. So what did Darren Wilson testify about the Brown shooting?

The answer is sure to anger Brown's advocates and raises some questions not just about the incident, but about the way in which police officers — in this case, an armed veteran of the police force — view ostensible threats from even unarmed black men. This has been a pulsing undercurrent of the Ferguson protest movement, and it's part of why you've seen signs and hashtags saying "Black Lives Matter" over the last few months.

While there's no accounting for tone or inflection at this point, as all we have are documents transcribing Wilson's testimony, he detailed his encounter with flourishes that made Brown out as a nearly superhuman presence. It's impossible to know for certain what transpired, in precisely what order, but Wilson's account has stoked a familiar sort of outrage and criticism.

Wilson's Testimony On What Happened

Wilson described rolling up on Brown and his friend, 22-year-old Dorian Johnson, in his police car while the pair were walking down the middle of the street on Canfield Avenue, calling out for them to move. This is precisely where the deviation from Johnson's account and Wilson's begins — while Johnson claims Wilson yelled at them with an obscenity, Wilson's version claims that Brown himself was the one cursing, saying "f*ck what you have to say" in response to his order.

In describing the run-up to the fatal moment, Johnson claims that Wilson pulled the car up sharply near the pair and tried to open his door, but it bounced back because of his proximity to the duo. Wilson, on the other hand, claims Brown deliberately slammed the door shut and tried to intimidate him. It's here where Wilson begins to establish the fear that would ultimately serve as his defense for shooting Brown dead. Wilson claims Brown punched him in the face unprovoked, which led to Wilson grabbing him around the arm from inside the car.

I tried to hold his right arm and use my left hand to get out to have some type of control and not be trapped in my car anymore. And when I grabbed him, the only way I can describe it is I felt like a five-year old holding on to Hulk Hogan.

After allegedly being hit again by Brown and fearing that a third punch to his face could be fatal, Wilson went for his gun, believing that his can of mace wouldn't be effective and might blind him as well, since he was not in possession of a taser.

For perspective, Brown was undeniably a large young man — his autopsy report stated his height at 6' 4" and his weight at 285 pounds. Wilson is not a small guy himself, however, also at 6'4" and 210 pounds, and his invocation of Hulk Hogan has been particularly controversial over the last several hours.

Not nearly as controversial, however, as his subsequent description of Brown looking "like a demon." After deciding he had no choice but to pull his gun, Wilson claims Brown said he was "too much of a pussy to shoot," and began grappling for the gun before Wilson fired a shot, striking Brown and sending blood and window glass flying.

And then after he did that, he looked up at me and had the most intense aggressive face. The only way I can describe it, it looks like a demon, that's how angry he looked. He comes back towards me again with his hands up ... I just saw his hands up, I don't know if they were closed yet, on the way to going closed, then I saw this and that face coming towards me again, and I just went like this and shielded my face.

WIlson testified Brown struck him again before Wilson fired yet another shot that sent the teen fleeing down the street. It was at this point, he said, that he left his car and pursued Brown on foot. Brown then stopped, turned to face Wilson, and this is where the story deviates completely and crucially from some eyewitness accounts — Wilson says Brown began charging toward him, in spite of having been shot once, and several more times before dropping to the ground.

At this point it looked like he was almost bulking up to run through the shots, like it was making him mad that I'm shooting at him. And the face that he had was looking right through me, like I wasn't even there, I wasn't even anything in his way.

This triumvirate of statements, not about the specific nature of how the events unfolded, but Wilson's subjective characterizations of Brown's strength, intimidation, and "demonic" face has loomed large since his testimony was released, and for good reason — obviously the grand jury accepted Wilson's description of the conflict, but these claims fall squarely in the realm of the subjective and leave room for interpretation. Was Wilson actually faced with a Hulk Hogan–esque 18-year-old who scared him to his core and bull-rushed him with multiple gunshot wounds?

Or does his account speak to a familiar, troubling phenomenon in cases of police shootings, that black men are seen by many in society, police officers included, as inordinately fearsome and intimidating, and thus don't receive the same life-saving restraint that a white person might? This perceived assumption of black malice on the part of police forces has been highly visible in the news of late — the police shootings of 21-year-old John Crawford and 12-year-old Tamir Rice, both in Ohio, have thrust that issue squarely in the spotlight.

Of course, ultimately there's no way to know how it all played out for sure, amid conflicting witness statements and physical evidence. But that would've been precisely what a jury trial would've accomplished — the grand jury isn't trying to render a verdict on whether Wilson was guilty, but merely whether there was sufficient cause to indict. They decided to decline that option, however, so now we'll never entirely know.