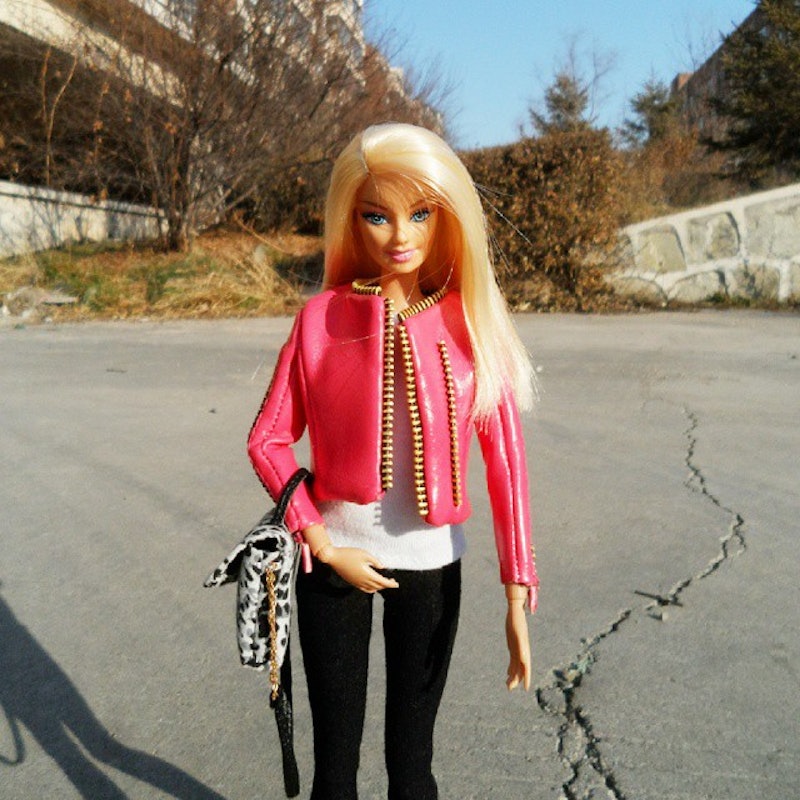 Like so many others out there, I love/hate Barbie. On the one hand, who couldn’t admire a woman who’s been a paratrooper, a scuba diver, and an ambassador for world peace, encouraging little girls to dream huge? On the other hand, Barbie has accomplished all of this with perfect skin, an anatomically impossible figure and, you know, invisible nipples. It’s an image so unattainable, so unrealistic, that it sort of makes the rest of it — paratrooping and all — feel like a big, plastic joke. (So that’s the hate part.)

Suffice it to say, I was thrilled with last week’s news about the release of the lovely Lammily, otherwise known as Average Barbie. Her message is reassuring and empowering: Neither stretch marks nor acne decrease your value. It's okay to be a real person!

But after researching Mattel’s imaginative and often head-scratching lineup (I’m looking at you, Pooper Scooper Barbie), I realized there is still a long way to go — at least when it comes to dolls that redefine beautiful. Yes, Barbie may have over 150 careers under her (Armani) belt (no joke, you can buy Giorgio Armani Barbie for a "mere" $150), but she still manages to avoid being an inclusive plaything for girls who don’t meet an idealized, reductive standard of pretty.

And so I present to you the new breed of Barbie that the world needs to see. Girl's got a lot of outfits. But she could use a few more.

Sure, in 2012 Mattel produced an I Can Be President Barbie, who was publicized as making a campaign — excuse me, “glam-paign” — for Capitol Hill. But would you vote for a candidate who claims the “B” party as her own (I don’t care if it stands for “B inspired”), or for a candidate who pairs hot pink heels with a hot pink power suit (I don’t care that the teeny outfit was designed by a former first lady stylist, either)? This time around, let’s put Barbie in a more realistically professional tweed ensemble or something. À la Kate Middleton! And how about making the focus more politics than shades of pink? Society will do its best to reduce a woman in government to her fashion choices anyway (see Wendy Davis and Michelle Obama), so it’s up to Barbie to make her platform something other than, well, platforms.

Perhaps this doll can perform crisis control for Mattel when the company makes sexist blunders, like producing a Teen Talk Barbie whose catchphrases include, “Math class is tough” — aka “Smart and pretty are mutually exclusive!” The company’s latest faux pas? A book published in 2010 entitled Barbie: I Can Be a Computer Engineer. In it, our heroine is less "engineer" than "illiterate." Until she gets her male friends to code for her, womp-womp. Matell issued an apology last week, but only after hilarious reviews of the book went viral. Considering that 40 percent of women with engineering degrees don’t work in the field because of its “old boys’ club” culture, this one might deserve more than a “my bad.” In fact, forget PR Barbie. How about Engineering Barbie who can code for herself? Now that’s beautiful.

Picture a doll with a retractable neck and removable love handles — like the before and after version of an airbrushed cover model — because, while we know by now that those magazine images aren’t real, it never hurts to have a reminder. Hell, even Barbie’s picture was likely altered before gracing the cover of Sports Illustrated . Synthetic hair that shiny? Please.

It’s great to have average Barbie, but if she’s anything like the average girl, she’ll probably experience disordered eating patterns — maybe not a full-blown struggle with ED, but most likely a mess of body-image issues and dieting woes. Healthy-Relationship-With-Food Barbie can come with three balanced meals a day, healthy snacks, and the occasional splurge. Because food is not the enemy, Ms. B.

She will be a friend to Muslim kids and teach non-Muslim children that it’s okay to be different — in race, creed, religion, and, yes, fashion — whilst also highlighting the spectrum of religious interests that women have. At least that’s what started to happen in 2009, when a Burka Barbie was produced as part of the doll’s 50th anniversary celebration. But she was auctioned at charity, and Barbie soon went back to her regular, very pink attire. While not everyone was happy about the Islamic version of Barbie, the most recent reports indicate that bullying of Muslim kids is on the rise, making the comeback of a tolerance-promoting doll a far more sound investment than that of, say, Cat Burglar Barbie. Seriously.

No girl looks like the original, smallest iteration of the doll. But not every girl looks like the average version, either — it's time for some plus-size plastic. Besides, Ken was still smiling after my family dog chewed off his legs in 1991; I highly doubt he’d be intimidated by a more voluptuous partner.

We don’t want our girls growing up thinking that being a mother is somehow less valuable an option than being a pet stylist or paleontologist — or that Barbie chose not to have a baby for fear of expanding hips. The doll doesn’t have to wear mom jeans — in fact, let’s put her in the “street chic” style of fellow matriarch Penelope Cruz. But perhaps it’s time for Barbie to embrace her maternal side. And hopefully in a less creepy way than Barbie’s BFF Midge, who came with a visible, detachable fetus until being recalled. I repeat, seriously?

Okay, this idea might have come out of my obsession with Homeland (Carrie didn’t die last week, right?!?), but with Katherine Heigl now joining the ranks of blonde intelligence officers on network TV, little girls are bound to take notice. It would be nice if they grew up believing they could actually be a CIA analyst in kickass Fendi — instead of just acting like one for the camera. Because they can. For REAL.

Stay with me here. Sure, Kim Kardashian might not be the ultimate role model (who even is?), but she has discovered a talent in showcasing her figure — a figure that's not the stick-thin industry standard. Maybe it’s not such a bad thing if our girls grow up encouraged to do the same. Time for you to do you, Barbie.