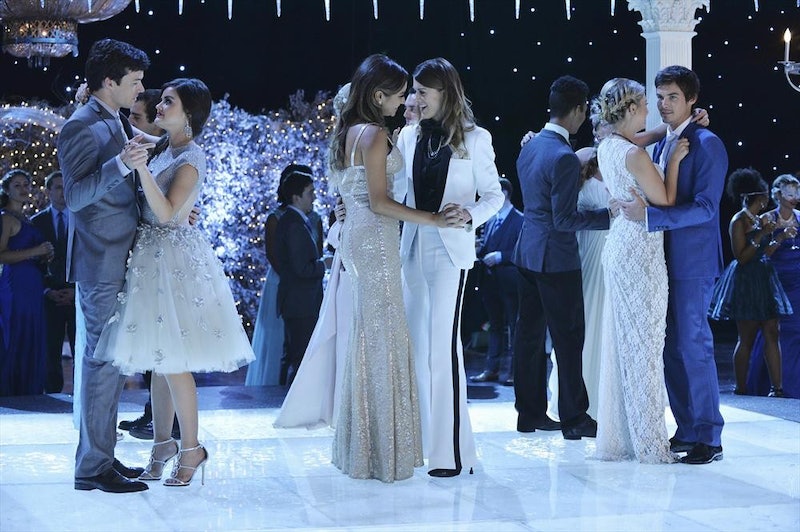 Seriously, Pretty Little Liars fans, stick a fork in that Emison 'ship, because that's so over. The series' summer finale left off with Emily and Paige just starting to warm up to each other again while Emily and the liars were falling-out with Ali. But, it looks like Emily and Paige are getting back together for "How the 'A' Stole Christmas" for real. Pretty Little Liars' first holiday special will air on Dec. 9 and showrunner I. Marlene King has already described the episode as a #HoRo — horror, with a little epic romance on the side. And, it seems like everyone's going to get a kiss under the mistletoe this holiday season — including Paily.

We already know, from already-released "How the 'A' Stole Christmas" photos, a lot about Paige's appearance in the holiday episode. The most important detail, however, might be the fact that she and Emily seem to have gone back to their normal, slightly dysfunctional, but adorable selves. And, Paige also seems to have fully embraced Emily's boundless holiday cheer — anyone who can handle that girl's love for Christmas, deserves a place in her heart.

In case you need a little refresher, back when Season 5a was airing over the summer, it seemed possible that Emily and Alison's 'ship might finally sail. Emily had been carrying a torch for Ali all of this time and now that she'd finally returned — and seemed to be returning some of Emily's unrequited love — and Paige was in the Anti-Ali Club, the timing just seemed right. And then there was that sleepover and that kiss between Emily and Alison that seemed like it was going to drive an even bigger wedge between the pair. Aside from the one that Paige drove between them herself when she told the police that Alison was alive after Emily entrusted her with that highly sensitive information. But it seems like that was just a minor hurdle in the Paily 'ship's future — at least, that's what I. Marlene King's made it seem like with her spoilers for "How the 'A' Stole Christmas."

The showrunner has essentially confirmed that Emison won't be happening in PLL Season 5b. So, now let's talk about what all of those Paily photos mean. ABC Family's already released a significant number of episode stills for "How the 'A' Stole Christmas" and I'm sure you can already guess who's in a bunch of them — Paige and Emily looking as in love as they were before Ali returned to Rosewood to haunt everyone's lives. The photos reveal two huge things about Paige in the holiday special — the first, that Paige will be Emily's date to the main event of the holiday episode, the Ice Ball, and second, that she'll also be attending the couples' holiday dinner — which will be cooked by master chef Ezra.

Considering where we left off with Paige and Emily's relationship, it's kind of a big deal that Paige is Emily's date to both of these events. They weren't on nearly as good of terms with on another as the other PLL 'ships and yet, here they are, hanging with the rest of the couples as if nothing ever came between them. To put it simply, these two are totally back together. Emily wouldn't be bringing her around and inducting her back into the inner circle if she didn't trust Paige again and have genuine for feelings for her, that's just not Emily's way. Especially when you consider how she tore down Sydney during Season 5a for being shady as hell — Emily's so not down to be fake and take people's crap, so having Paige around can't be for any other reason than the fact that they've put their differences aside and realized that they care about one another.

Frankly, I'm really happy that these two have worked things out because Ezra and Aria can't get all of our attention. And, considering how much horror the holiday episode will bring to our lives, it's kind of nice to think that even the least likely of PLL couples will get to kiss under the mistletoe.