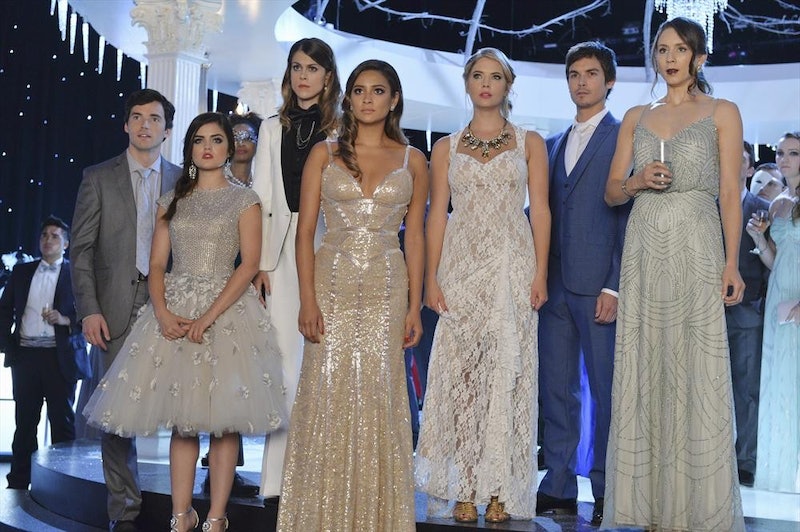 Maybe things won't be so bad for the liars this Christmas? No one is under the impression that PLL 's "How the 'A' Stole Christmas" on Dec. 9 is going to end with Alison's heart growing three sizes or with her magically no longer being a sociopath. But, at least the Pretty Little Liars holiday episode will feature Mona's return and, according to spoilers from I. Marlene King, some serious romantic moments. Nothing like the holiday spirit to bring couples together, even in Rosewood where the sky is falling around every corner. The showrunner teased that "How the 'A' Stole Christmas" will feature "epic romance" — but, for which couple? Ezria, Spoby, Haleb, and even Paily (brush up on your 'ship-names, people) were on the upswing when we left off with the PLL summer finale.

Back in June, when PLL's holiday episode was still a thing of the distant future, I. Marlene King gave fans a little taste of what was to come. And, for anyone that was upset with the lack of romance during Season 5a, we're going to be getting a lot more of it in Season 5b. Along with PLL's signature horror, of course. A fan asked King to share "something" about the Christmas special and, because the PLL showrunner knows exactly what we all want, she responded perfectly with:

So, what does that mean for your favorite PLL 'ship? Well, first of all, King essentially told ET Online that all Emison fans should leave the building, because it appears that that 'ship has finally sunk. But for the rest of us, it seems like King and PLL have a lot of romance in store for all of its couples. But, of course, there's one couple that might be having a merrier Christmas than the rest — and that's Ezra and Aria. In one of the first promos for the upcoming "How the 'A' Stole Christmas," we saw Ezra gift Aria some totally not "low-key" jewelry and a dress to wear to the anticipated Ice Ball. And, apparently things are only going to get more romantic with Ezra's storyline.

King also dished to ET, straight-up, that Ezra's storyline is going to be "romantic" because there's nothing more romantic than a man who can cook. (Yes, there are going to be "cute" and "steamy" moments with the other 'ships on the show, but Ezra and Aria were the only couple whose storyline King called "romantic.") And that's exactly what Ezra will be up to in the holiday episode — I can appreciate a many that knows the way to a girl's heart is through her stomach. "How the 'A' Stole Christmas" will feature a dinner scene with the four liars and their significant others and, thanks to King, we now know who the head chef will be.

Being a good cook and an incredibly gift-giver aside, it makes perfect sense for Ezra and Aria to soak up all of the romance in the PLL holiday special. I mean, they've been through a lot over the past season and a half. There was that huge reveal that Ezra was once in love with Ali and only chatted up Aria because he was trying to write a book about who killed her, there was Aria's breakdown, and then their was their rocky reunion. OH, and Ezra's illegitimate child and Maggie and the fact that the Montgomery's weren't cool with their relationship and Ezra almost got fired when 'A' outed them to the Rosewood High School principal. Now, don't get me wrong, I'm not discrediting the struggles of the other 'ships on this series, but Ezra and Aria's time has come.

And, really, while I love every other relationship on this show — don't even get me started on Haleb and Spoby — Ezria has some of the best love scenes on PLL. They're winners in the love department. Alison and Mona's death dominated the first half of Season 5, so we really need seasoned love experts to bring some romance back to PLL. And, Ezra and Aria ARE those experts, especially when it's #HoRo, as King called it. Remember that scene on the ski lift? Or when Ezra had crazy eyes for, like, an entire season? This is the pair Pretty Little Liars needs to perfectly mix terror and love and that's why Ezria is going to dominate the love department with PLL's holiday episode.

I dare you to try to break them up this time, 'A.'