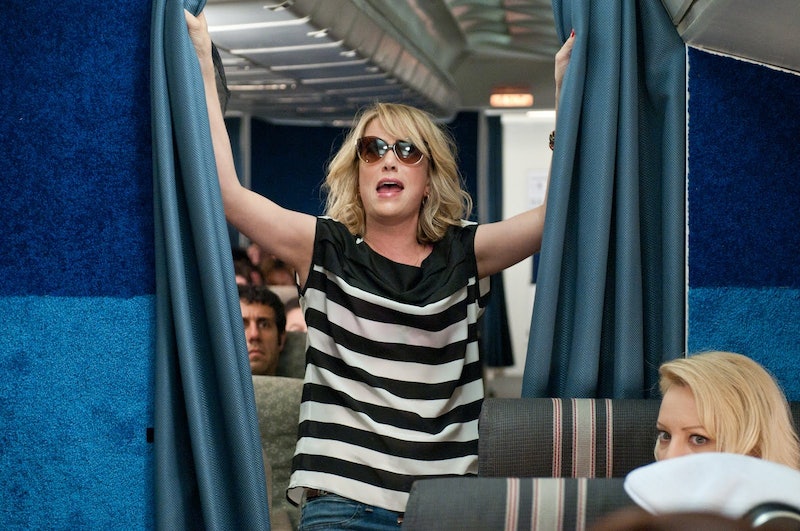 After years of flying back home for the holidays, you've finally figured out to have a good flight. You've got your ear plugs, your weird doughnut-shape neck pillow, your sleeping pills, all those back issues of The New Yorker that you've been pretending to have already read, and you're ready to rock. You've been working overtime at your job for weeks, and are psyched to have a few hours alone on the plane to nap, zone out, and find out what the various Real Housewives are up to. So why, as it turns out, does flying still feel so awful? Why did you get a splitting headache that lasted the whole flight? Why did your skin go from "perfect" to "eighth grade" sometime while you were over the Smoky Mountains? Why were you farting from take-off to landing like it was your job and you were gunning for a promotion? WHY???

Well, the short answer is that the cabin pressure and humidity levels on airplanes are pretty different than what we're used to. Your average comfortable humidity level for humans is 40-70 percent; most airplane cabin humidity levels are at around 20 percent. And the barometric pressure during a typical plane ride is equivalent to that we'd feel while standing atop an 8,000-foot mountain.

These factors put unusual strain on our bodies, and basically cause us to become tired, gassy, zit-covered, headache-ridden beasts for the duration of our flight. And worst of all, there's not a ton you can do about it — our bodies were simply not engineered to look and feel good while flying through the skies. But at least if you become familiar with some of the most common physical side effects of flying, you can be a little more prepared. Farty, but prepared.

YOU'RE MORE LIKELY TO GET A HEADACHE

You're four hours into an eight-hour flight, and nursing one splitting headache. Is it being caused by something about the plane ride, or just the toddler a few rows ahead of you who won't stop singing "Let It Go"? Well, it's probably a little bit of both. But the main culprit is air pressure.

Though there's plenty of oxygen in a fully airborne plane cabin, the air pressure keeps us from being able to fully absorb that oxygen that's freely moving about the cabin into our bloodstream. This can lead to feelings of fatigue — and a horrible headache. In its more severe iterations, this fatigue and headache airplane combo is known as "altitude sickness." Your best bet to combat this super common side effect is to come prepared with some Advil and stay hydrated. But also, I do still feel like that toddler bears some of the blame here. Can't he just get into silently watching American Hustle, like everyone else on this flight?

So you already know that the plane's cabin pressure can make you feel fatigued — that's what makes you feel like you ran a 10K while on the plane, when all you actually did was sit still and watch Law & Order episodes for six hours.

But there are also other forces conspiring to make us feel totally beat while we fly the friendly skies. When a plane takes off, it doesn't take in any fresh air until it's fully airborne, and the recirculated air can make airplane passengers feel sleepy. The G-force that we feel when a plane takes off can also make us feel more tired. Combine these factors with the cabin pressure–induced fatigue, and you have a recipe for falling asleep on your laptop and making a mockery of your plan to "reply to ALL the emails" while flying.

Something smells weird in here, and it's not just that cheeseburger you bought at the airport Chili's (though it is also that — eat that stuff before you get on, man!). Yup, flying causes gassiness and flatulence — the drop in pressure makes your bowel air volume increase, which can make you feel bloated and, well, farty. But doctors don't recommend holding it in till you land in Cleveland or Tulsa or wherever you're headed — doing that can cause bloating and stomach pains. The more polite among us will get an aisle seat and pop over to the bathroom whenever they feel the urge to toot rising up...but the rest of us will be forced to simply take that singing toddler's advice and let it go.

YOU'RE MORE LIKELY TO HAVE PIMPLES POP UP

Have you had zits show up out of nowhere on a long flight, like the villain in a horror movie that all the other characters assume is dead? Well, it's not your imagination — the previously mentioned low cabin humidity dries out your skin, which is why you might suddenly find your lips chapped or your cheeks flaky. But that low humidity will also actually cause oily skin to become oilier to compensate for the dryness, which can leave you landing with a face full of surprise zits. There's no surefire cure, but drinking a lot of water and applying moisturizer both before and during the flight can at least give your skin a fighting chance.

Oh, and that low humidity level? It's also why you might be suddenly compelled to chug tiny bottle after tiny bottle of water on your flight, even though you have the window seat and you know that trying to get to the bathroom a few times on this flight is going to make you a ton of enemies. Our bodies get dehydrated from the airplane cabin's low humidity levels, which can make us feel thirsty — as well as dry out the mucous membranes in our throats and sinuses, which can leave us not just feeling crappy, but also more vulnerable to illness.

There's nothing to do to fight this one except drink a ton of water, and stay away from anything dehydrating, like booze or caffeine — so just make your peace with your aisle-adjacent seat mates now (and maybe buy them a $5 apple from the snack cart?).

More like this
After 24 Years Of Disney Vacations, I Finally Took A Trip On My Own
By Charlie Mock
A Guide To All Of Zach Shallcross' 'Bachelor' Filming Locations
By Brad Witter
11 Exercises For Dowager's Hump That'll Help Your Neck Posture
By Carolyn Steber
Kourtney Kardashian’s Wellness Guru Shares Her #1 Tip For Better Health
By Taylor Jean Stephan
Get Even More From Bustle — Sign Up For The Newsletter
From hair trends to relationship advice, our daily newsletter has everything you need to sound like a person who’s on TikTok, even if you aren’t.