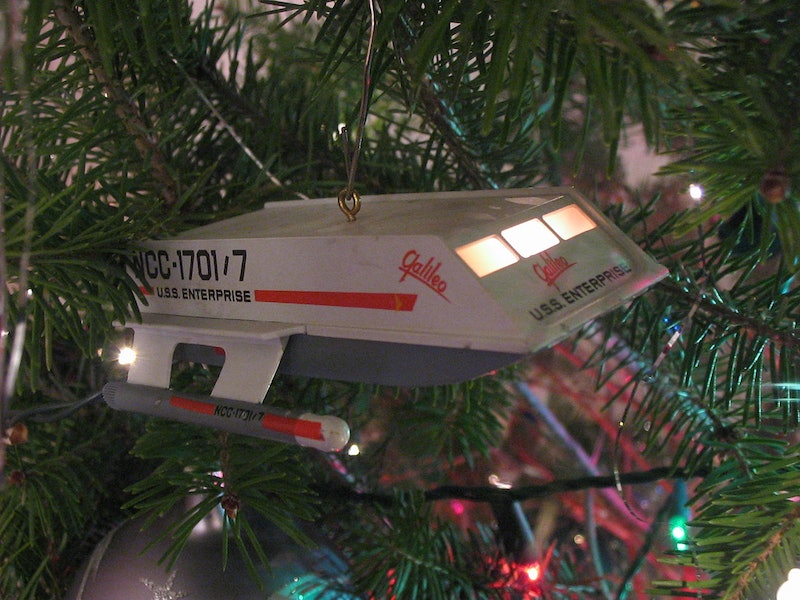 If there’s one memory most people of a certain age who grew up celebrating Christmas have in common, it’s Hallmark Keepsake Ornaments. I’ll admit that I haven’t purchased a Hallmark Keepsake Ornament in years — but my childhood Christmases are full of fond memories of adding new ones to our collection, each year, with each one more spectacular than the last. Not that our tree consisted of only Hallmark ornaments; on the contrary, it had such a motley crew of decorations dangling from its branches every year that I’m surprised the poor thing didn’t have a personality crisis every time we dressed it up. However, our Hallmark ornaments were the only ones that tended to do things like light up and sing and dance — so perhaps I can be forgiven for the fact that they take such a prominent place in my recollections.

Although Hallmark Keepsake Ornaments have been around since 1973, the ‘90s seem to have been a particularly fruitful decade for them; a huge collection of ever more popular ones launched each season, and — let’s face it — they were all really. Effing, Cool. By the late ‘90s, they were getting a little less cool and more sentimental — but oh well. All good things must come to an end and all that.

Since the holiday season is just about to kick into high gear, I’ve dug through the vaults and rounded up the coolest Hallmark Keepsake Ornaments of the ‘90s for Throwback Thursday this week. Although singling out just one ornament per year was a daunting task indeed, I’ve picked one for each year of the decade; you can see the rest at the wonderful nostalgia trip known as Hooked on Hallmark. Seriously, you guys. They’ve got every single Hallmark ornament that has ever been released on file there. It’s truly something to behold. Oh, and most of them can still be gotten on eBay; I've included a link when possible. Raise your hand if you’re ready for a very ‘90s Christmas!

Not going to lie: This one was as annoying as it was awesome, mostly because good gravy, those dancing reindeer were loud. But at the same time… dancing reindeer. Come on. It doesn’t get much better than that. Watch it in action here:

I didn’t have this one hanging on my tree as a kid, but if six-year-old me had known it existed, she would have flipped her shit over it every time the tree got plugged in. According to its description at Hooked on Hallmark, it featured “blinking lights and motion” and bumper cars “[dashing] around the track.” I’d call that a win.

This? Oh man. If I had to pick one object that represented my entire childhood, this one would be it. Star Trek ornaments have always been an important part of the Peters family Christmas trees, and this one was the cream of the crop. Not only did it light up, but even better, it had a button which, when pressed, caused the dulcet tones of Leonard Nimoy to ring out from the tiny little speakers on it with the message, “Shuttlecraft to Enterprise. Shuttlecraft… to Enterprise. Spock here. Happy holidays. Live long… and prosper.” That’s exactly how he said it, too — ellipses and all. Ah, nostalgia!

Having Spock talk to you from inside an ornament doesn’t do it for you? Then record your own voice instead! This offering from 1993 let you send a message to your loved ones in the form of a personalized talking ornament. Or, if you were me, it allowed you to pretend that you had been transformed into a rodent of some kind.

In 1994, Beatles fans of all ages who also happened to celebrate Christmas rejoiced when they discovered that they could now adorn their tree with their favorite band. The release of this limited-edition ornament came not too long before the fruits of the Anthology project’s labors emerged; in November of 1995, both the documentary and the first of the three accompanying albums debuted. Beatlemania never dies.

Real talk: I had one helluva time picking between this one and the not one, but two Star Trek ornaments that came out in 1995 (Captains Kirk and Picard). But, well… I couldn’t very well pass up the idea of a mistletoe-strewn adventure with Ms. Frizzle, could I? Related: Ms. Frizzle is definitely my style icon. We may have sometimes questioned her teaching methods, but A) they worked, and B) she always looked fabulous.

1996 was a good year for Hallmark ornaments: In addition to this Peanuts-themed one, Marvin the Martian, The Wizard of Oz, the USS Voyager, and the Millennium Falcon hit the scene. I think the Peanuts one wins for its musical abilities, though; when you pressed a button on it, it played “Linus and Lucy.” I used to pretend the reindeer in Santa’s Ho Ho Hoedown were dancing to it, Peanuts-style.

Because, I mean… Darth Vader. I’m not really sure why he thought Christmas was an appropriate time to tell us that the Force was strong with us, but that we were not Jedi yet — but then again, Vader wasn’t really known for being the world’s greatest dad.

In contrast to the prior few years, 1998 proved to be something of a disappointment. Cruella made a decent addition, though; at least she could go hang out with Vader and turn that part of the tree into a Bastion of Evil. Nothing spruces up the holidays like a little battle against the forces of darkness.

By 1999, the glory days of ‘90s Hallmark Keepsake Ornaments were all but spent, leaving us with but a few sad reminders of time gone by. At least we still had Lieutenant Worf and his Ba’leth to keep us warm at night.

More like this
American Girl Doll Memes Are Going Viral On Instagram & Tiktok
By Emma Carey
Taco Bell Announced A Crunchwrap & Tostada Made With Cheez-Its
By Emma Garza
'Friends' Creator Marta Kauffman Opened Up About Misgendering A Guest Character
By Grace Wehniainen
Kimberly J. Brown & Daniel Kountz Looked Back On Their ‘Halloweentown’ Romance
By Stephanie Topacio Long
Get Even More From Bustle — Sign Up For The Newsletter