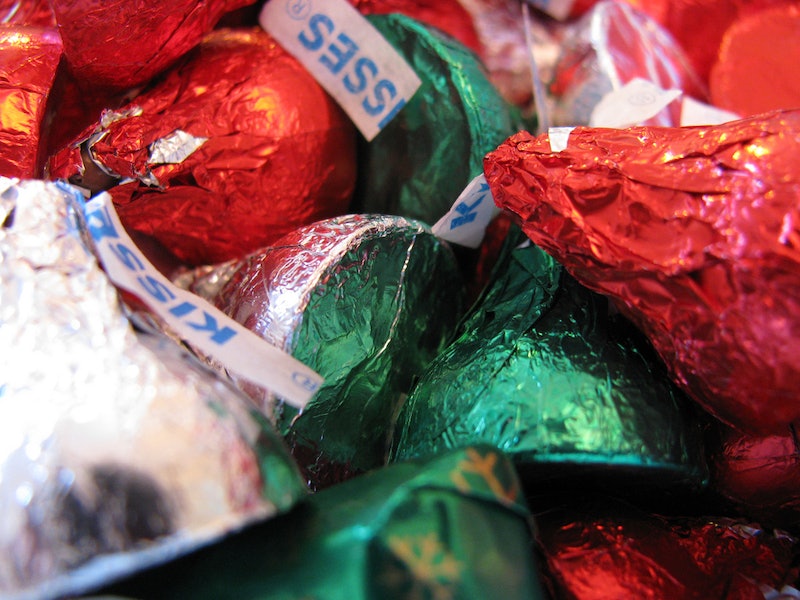 As long as there is processed food, and as long as there is holiday marketing, manufacturers of processed food will always find a way to milk each season for all its worth. Case in point: Holiday junk food. Most of us don’t eat this stuff too frequently after we grow up, though, so I’m probably not alone in how fondly I look back at the seasonal snack foods of my childhood. Right? I mean, we all thought unnecessarily holiday-themed food was awesome, right? Nothing spruces up a plain ol’ bowl of cereal like a seasonal makeover. This Throwback Thursday, let’s take a look at some of the best holiday (OK, admittedly, it’s mostly Christmas — marketing is dumb) junk foods of our youths, shall we?

Obviously yes, junk food is bad for you, and no, it’s not a good idea for kids to be chowing down on it all the time. But as with all things, moderation is the key; my mom, for example, kept my brother’s and my access to junk food limited while occasionally allowing us to have it. Subsequently, we didn’t gorge ourselves on it without tasting it every day; instead, it was a treat that we looked forward to. Maybe that limited access even causes my constant nostalgia for foods I didn’t actually eat all that often: I associate it with something special, so my memories of it are sharp and happy. Well played, Mom. Well played, indeed.

Originally, I was planning on focusing solely on junk food from the ‘90s; however, given the propensity of the late ‘80s and early ‘00s to look pretty much the same as the ‘90s, you’ll notice a few oddities here and there. Whatever — as long as it’s at least 10 years old but not more than 30, I’ll consider it fair game. So for this Throwback Thursday, here’s a look back at 10 vintage seasonal snacks that made the holiday season seem that much more festive:

Produced by Ralston in the early ‘90s, Christmas Cookie Crisp took an already amazing concept — eating cookies for breakfast — and imbued it with a little holiday cheer. Instead of miniature chocolate chip cookies, the cereal looked like red and green sugar cookies dusted with snow. Alas, Cookie Crook and Officer Crumb are no longer the mascots of this most hallowed of breakfast treats; they were retired in 1997 and replaced first with Chip the Dog, and later Chip the Wolf. But at least the old commercials are still available on YouTube, right?

The Coke inside the can was still the same bubbly cola as always — but its cosmetic makeover and the commercials that went along with it somehow made soda into a festive holiday beverage. The now-infamous Coca-Cola polar bears first appeared in the ‘90s, with the “Northern Lights” ad seen here debuting in 1993. Ah, memories!

I’m cheating a little bit here — Christmas Crunch made its debut in 1988, rather than the ‘90s — but I mean, how can you not include holiday-themed Crunchberries on a list like this? Like most “sugar cereals,” Captain Crunch never really tasted like much to me other than sweet; the red and green Crunchberries made this one work, though.

Obviously these are still around today — but much like the Coke ads, the Christmas Hershey’s Kisses ads are almost more important than the treats themselves. The stop motion bell choir ad seen here first appeared on television screens nationwide in 1989, making them a huge part of the holiday season for any ‘90s kid. It’s also the longest-running ad Hershey has ever produced.

This one is another cheat; the earliest version of it I could find was from the early ‘00s. But Kid Cuisine itself has been around since 1990 — I remember when it first appeared — so I’m pretty sure that at least one seasonally-appropriate version took the stage at some point during that decade. In any event, according to now-defunct nostalgia site X-Entertainment (it’s since been reincarnated as Dinosaur Dracula), the 2003 version featured reindeer-shaped chicken nuggets, corn, mac and cheese, and some kind of chocolate pudding thing that looks a little like Christmas sneezed all over it. It’s not super appetizing; then again, though, the point of Kid Cuisine wasn’t to be delicious. It was to be food that was OK to play with.

While we’re on the subject of terrible-for-you entrees, let’s not forget McDonald’s holiday-themed Happy Meals. There wasn’t anything particular notable about the food... but the toys? Well, who wouldn’t want to find a seasonally appropriate Polly Pocket waiting for them along with their dinner?

I’m not exactly sure why so many breakfast cereals feel the need to give themselves Christmas-themed makeovers, but Lucky Charms joined the party in 1991. The green and red marshmallows were shaped like stars, stockings, trees, and bells — and as an added bonus, the box came with things like free peel-off ornaments and gift tags you could cut out.

While Coke may not actually change up the soda itself for the holidays, Pepsi offered a cinnamon-spiked version of its classic cola recipe in 2004. They called it Pepsi Holiday Spice; poured over a scoop of vanilla ice cream, it made one helluva Pepsi float. Man, I wish that stuff still existed.

That’s a weirdly specific Pop-Tarts flavor, isn’t it? From what I can gather, they were promoted as a tie-in with The Grinch’s theatrical release; as such, they were probably on the market during the 2000 holiday season. I can’t say I typically like my strawberry Pop-Tarts frosted with radioactive green, but I suppose at least it looks kind of like the green top of a strawberry once you get to the red goo inside. Or something.

Although this 1998 offering was really just a box of Pebbles with snow-like sprinkles on them, it’s kind of hard to pass up something with a name as awesome as “Bedrock Blizzard.” Cocoa Pebbles were always my sugar cereal of choice, but there was a red and green Fruity Pebbles version, too.