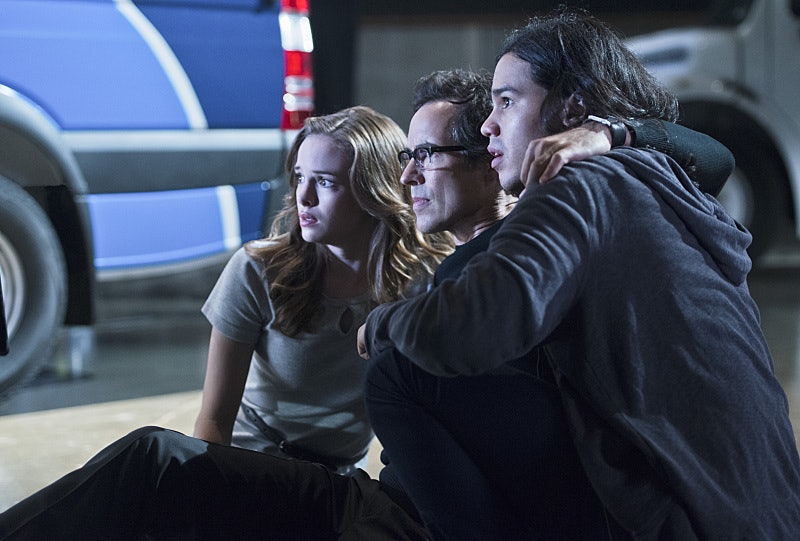 Tuesday night's episode might have just dropped one ginormous clue about a character we might meet later on this season on The Flash when Harrison Wells mentioned Will Everett, DC Comics' Amazing-Man, among the victims who died the night of the particle blast from S.T.A.R. Labs. If that quick mention really was meant to clue viewers in on a character that might be coming up on the show, then it's a mystifying one, because it has the potential to change the story arc of Amazing-Man completely. The hero originally appeared in 1983 as part of DC Comics' "All-Star Squadron," and several incarnations of him have appeared in Justice League story arcs, but in his origins he was a retired Olympic athlete working as a janitor in a lab when an explosion gave him his abilities. While the circumstances certainly run parallel to The Flash, the lab was run by a Dr. Terry Curtis in the 1930s, not Harrison Wells in modern day, so this would be one hell of an Amazing-Man reboot.

While his story would certainly be getting a makeover, I'm hoping that his abilities don't. Amazing-Man has the power to transform his body into any material of any object he touches, making him a human chameleon. And assuming that the show would keep him in his superhero roots, he would make a fantastic ally for Barry and the team at S.T.A.R. labs.

So far there haven't been any casting rumors, so it might be awhile until we see Everett, but the sound of Harrison saying his name was unmistakable. Whoever ends up playing him, I'm sure we're going to have a lot of fun watching how his powers get reinterpreted on screen for the first time. If he is on the show, that is — and if he isn't, then damn it, Harrison, you've tricked us again!