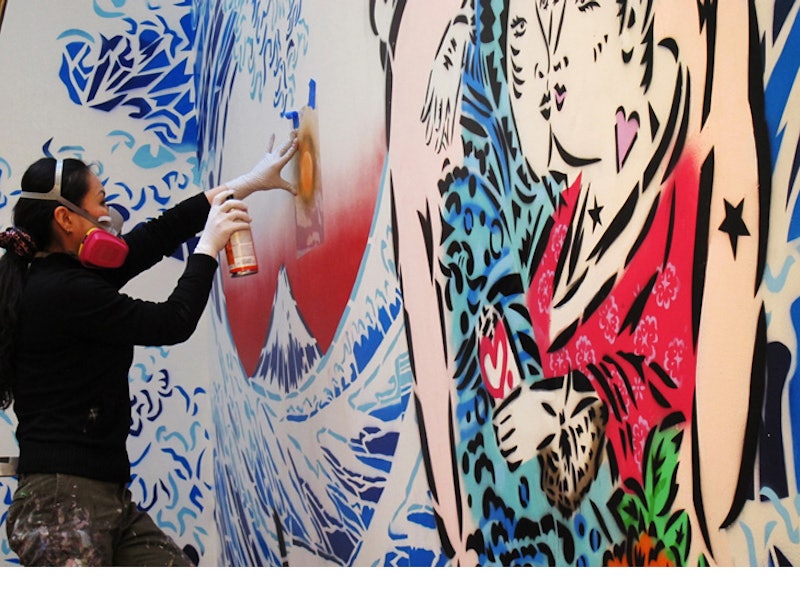 Though graffiti and street art tend to be male-dominated art forms, a growing number of women are both embracing the medium and getting good attention. “There are a couple of women that have really made a name for themselves in this game,” says Jenni Button, director of the nonprofit Holiday Exploits, which connects artists with humanitarian and social causes. Button also curates gallery shows and street art projects in the Chicago area. I talked to her about women’s place in the street scene and which female artists we should have on our radar.

BUSTLE: I have this sense that most graffiti artists are guys, but I guess I don’t actually know if that’s true or not. Is it?

JENNI BUTTON: Yes, women are super-underrepresented in this industry.

Is that because there are fewer of them overall or because they get overlooked?

There are definitely less overall. Part of that has to do with the danger of getting caught — it's vandalism, essentially, and if you look at it statistically men commit vandalism more often than women. So I think that has something to do with it. But there are also a lot of really talented women out there that are getting overlooked. And there are a lot more women in the game now than there ever were before.

Close-up of mural by Elle Deadsex

Who are some of the more well-known women street artists?

Maya Hayuk — she’s been doing street art and graffiti for a while now, and her murals and installations can be found all over world. She's got a show at the Hammer Museum (in Los Angeles) right now. She does these really nice line patterns and works in super bright colors. And she’s a feminist —she's taken a stance and will not work with galleries who exhibit less than 10% female artists. I totally respect that decision, and she's at a point in her career where she can demand that.

Another one that’s doing really well for herself is Olek. She is the forerunner of a type of street art called yarn-bombing, which is where they literally go out and, like, knit around a tree, a bicycle, a car... literally anything. She does woven installations, all kinds of stuff. I know it sounds really hokey, but she’s phenomenal. She had a super-ambitious exhibition at Levine Gallery in New York. She knitted skeletons, furniture food and these fantastic kitschy, knitted pictures, where the middle will say something tongue-in-cheek like “all you need is love and money.” They’re hilarious, because they’re an updated, witty take on cross-stitched art someone’s grandmother made.

And then Swoon — she’s been around since the '90s. She’s an activist and a humanitarian — most of her work profits the charities and organizations she works with. Her work is a whole other medium of street art called wheat paste, where typically they’ll draw their work on a piece of paper and then they make a mixture of flour, glue, sugar, water and apply that directly to a building. She does super intricate paintings and cuttings — not laser cut, all hand cut — that makes her work instantly recognizable.

Do you get the sense that there’s any difference, at large, in women’s and men’s street art?

Hmm, that’s an interesting question. I meet a lot of women street artists and graffiti writers that I thought were dudes when I saw their work on the streets, actually. And some of them I think that’s their game, like how female writers used to take a man’s name as a pen name to get respect. I think a lot of these artists do do that to get that respect — but it’s kind of hard to say because there’s so much anonymity in this world anyway, since most of what they’re doing is illegal. Some artists, like Miss Van, Elle Deadsex and Lady Aiko are known for their ultra feminine characters and viewpoints, but with some it’s not so obvious.

Mural by Swoon // Photo via The Brooklyn Museum

Wait — are street art and graffiti not the same thing?

Well, graffiti and street art are kind of wrapped into the same genre a lot of time — though if you ask a graffiti artist, they are not. And, like, with street artists, if I see a piece I like, I’m gonna put up a piece next to it to show respect, to show that I like that piece. For graffiti artists, that would be seen as a complete dis. We see a lot of crossover between the two worlds though. A lot of artists got their start throwing up tags.

Yeah. There can be a lot of that! There’s a lot more women that are doing other kinds of street art but less in graffiti. Lady Pink is probably one of the most well-known female graffiti artists, she’s been writing since the late '70s. And there are definitely other women graffiti artists coming up, but… we’re kind of in a post-graffiti phase right now anyway. Because true street art, true graffiti doesn’t exist anymore. People who started out as vandals are now showing in top galleries and museums.

Mural by Lady Pink // Via pinksmith.com

Are some big cities better for women street artists than others?

Women are super underrepresented in this game in Chicago; I'm hoping to change that! I would say New York and Los Angeles have been more receptive to graffiti in general.

Anyone else you haven’t mentioned yet that we should pay attention to?

Lady Aiko is a stencil artist who I really love. She was part of the Faile Collective, a group in New York City that have really, really blown up. But now she’s on her own, doing her solo thing and rocking it out. Really girly, feminine imagery.

And Margaret Kilgallen is one of my all-time faves. She was a Bay-area train writer whose work is highly influenced by American folk tradition. She was diagnosed with breast cancer while she was pregnant but chose not to go through with treatment so she could carry the baby to term, and she died shortly after her daughter was born. Her husband is also a very famous street artist, named Barry McGee, and their love story is tragic and just beautiful. He still writes her name and does her images on trains, and his work has really taken on her light since her passing.