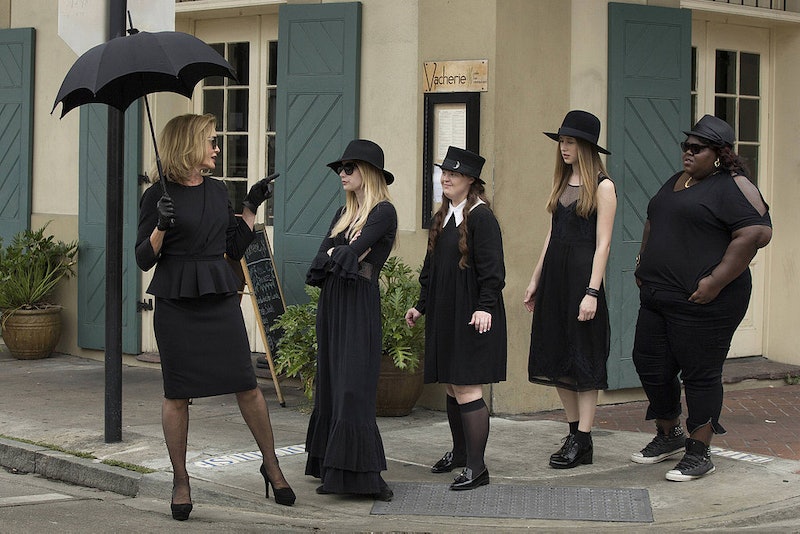 As the weather outside gets increasingly more frightful, the most delightful way to spend your evening is watching the new movies and TV shows streaming on Netflix in December. Although there aren't many holiday movies popping up yet, there are some great classics to fully embrace your nostalgic side (Romy and Michele's High School Reunion and Troop Beverly Hills , which is also streaming on Amazon Prime) and new favorites (American Horror Story: Coven) to binge-watch. There's actually a little bit of everything to watch in the chilly month, including the drinking-game-friendly Sharknado 2: The Second One and one where you can just watch people drink a lot, a.k.a. The Wolf of Wall Street.

Even though you may want to just take the month off of work to watch everything on Netflix, I've narrowed down 13 choices to tackle first. Since most TV shows are on hiatus for at least a month or two, this is the ideal time to watch all the movies you can handle. And for the record, Gilmore Girls is still streaming in full, so if none of these appeal to you, Lorelai and Rory will always be there for you.

This fun medieval film stars the late Heath Ledger in one of his early roles. It hits Netflix on Dec. 1.

If you haven't seen this classic starring Kate Hudson and Patrick Fugit, watch immediately. Well, when it starts streaming on Dec. 1.

To make this feel weird, just watch it and House of Cards back to back. It starts streaming on Dec. 1.

Get ready to sing "Cookie Song" over and over again starting Dec. 1.

If you haven't watched Coven yet, the whole season starts streaming on Dec. 6.

This super-sized version will include a lot more of Ron Burgundy — probably literally. Catch it starting Dec. 6.

Sharknado 2: The Second One

Prepare your drinking games for Dec. 6!

The Wolf of Wall Street

Leonardo DiCaprio dancing is just the best. It's three hours long, so make some popcorn and get comfy on Dec. 11.

Whether you want to compare it to the US remake or just prepare for Season 2, you can watch the whole first season starting Dec. 12.

This original series premieres on Dec. 12 and is marathon-ready. The story of famous explorer Marco Polo begins as he enters the great Kublai Khan’s court and navigates the world of "greed, betrayal, sexual intrigue, and rivalry."

There isn't a trailer for the Parks and Recreation star's special yet, so here's a video of him singing "Pu**y and Weed" on Conan. You can watch it on Dec. 12.

Paranormal Activity: The Marked Ones

The latest installment of creepy paranormals will make you jump starting Dec. 20.

The classic '90s cult film will finally stream on Dec. 22, just in time for Christmas viewing!