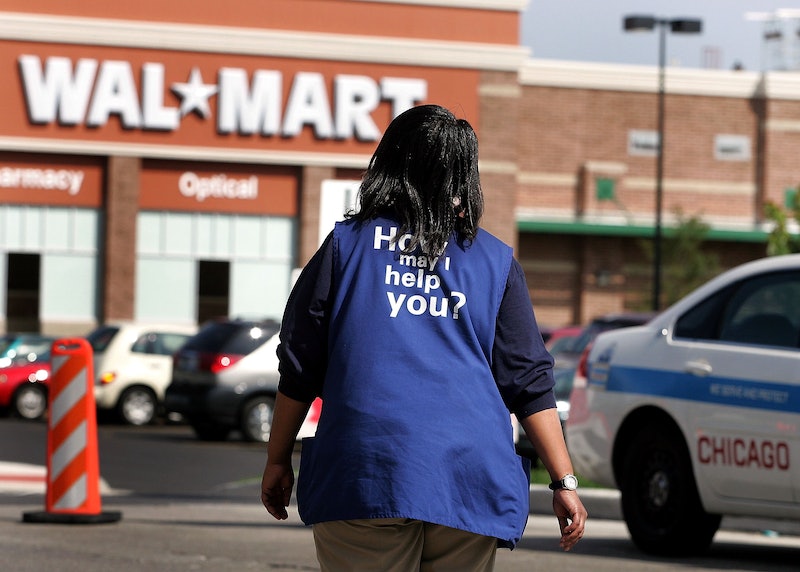 For the third year in a row, Walmart workers are striking on Black Friday, calling for better hours and increased wages on the busiest shopping day of the year. According to workers' rights group OUR Walmart, which organized the nationwide protests, Walmart employees in six different states have already submitted their formal strike notices. Employees in several other states are expected to do the same prior to Black Friday.

Walmart employees were thrust into the center of the growing anti-Black Friday campaign — a movement largely lobbying for fair wages and hours for minimum-wage employees working long hours over Thanksgiving weekend — in 2012, when OUR Walmart held its first nationwide protest. OUR Walmart initially demanded the retail giant to pay its employees at least $25,000 per year, but over the last two years, the campaign has bolstered its platform, advocating for a living wage increase to $15 an hour and guaranteed full-time work.

According to the United Food and Commercial Workers, a union that backs OUR Walmart, a majority of Walmart employees make less than $25,000 per year. Meanwhile, new research from the National Bureau of Economic Research released earlier this year found that Walmart workers are paid, on average, $8.48 an hour — less than the average Starbucks barista. Recent national data from PayScale shows that Walmart's hourly rate for cashiers ranges between $7.54 and $10.81, while overnight stockers make anywhere between $7.81 and $13.29.

Although a number of protesters on Black Friday won't be Walmart employees, but labor rights activists and progressives, OUR Walmart expects thousands of workers to peacefully strike. Charles Brown, who works at a Walmart in Virginia, told The Huffington Post he's planning on missing three shifts to protest his own employer:

Some [other workers] may want to do a strike as well but are hesitant. They need to know they don't have anything to be afraid of. If we don't stand up, no one else is going to stand up for us.

Some Walmart workers, however, aren't even waiting until the most hectic shopping day of the year to strike. Employees from Washington, D.C. to California staged peaceful sit-ins at their home stores on Wednesday afternoon, as shoppers conducted their last-minute Thanksgiving browsing. Walmart employees also teamed up with fast food workers, holding rallies outside local Walmart stores with "Fight For 15" signs — as in, $15 an hour.

Black Friday's Walmart protests also come on the heels of a report from Eat Drink Politics, which found that a majority of low-wage Walmart employees live on food subsidies, because they make less than $25,000 per year or are primarily part-time workers. According to the report's author, Michele Simon, about 825,000 Walmart employees live on a salary less than $25,000. In fact, Simon found that a majority of Walmart employees make just $15,550 per year — $8,000 below the federal poverty level for a family of four — when working full-time. For part-time employees, who account for nearly 600,000 members of the Walmart workforce, the pay is far worse.

Simon writes in the report:

Walmart’s low-wages and poor benefits frequently result in too many workers turning to a variety of public assistance programs. A recent report estimated the cost to taxpayers of Walmart workers’ total reliance on public assistance is $6.2 billion a year.

Walmart has yet to release a statement on the upcoming Black Friday events, but it's safe to say the retail giant is not looking forward to the strikes. In November 2013, the company went on the defense, denouncing the strikes as a "publicity campaign" and attacked activists for misleading their workers. The company said at the time:

This is just another exaggerated publicity campaign aimed at generating headlines to mislead our customers and associates. ... The fact is, these ongoing tactics being orchestrated by the UFCW are unlawful and we will act to protect our associates and customers from this ongoing illegal conduct.

More like this
8 Charities To Donate To During Black History Month
By Alexis Morillo
50 Valentine’s Day Instagram Captions To Post If You’re Single
By Jessica Booth, Lexi Inks and Carolyn Steber
30 Sweet Valentine's Day Caption Ideas For Long-Distance Relationships
By Syeda Khaula Saad and Carolyn Steber
25 Galentine's Day Games To Play On Zoom With Your Long-Distance Besties
By Mia Mercado
Get Even More From Bustle — Sign Up For The Newsletter
From hair trends to relationship advice, our daily newsletter has everything you need to sound like a person who’s on TikTok, even if you aren’t.