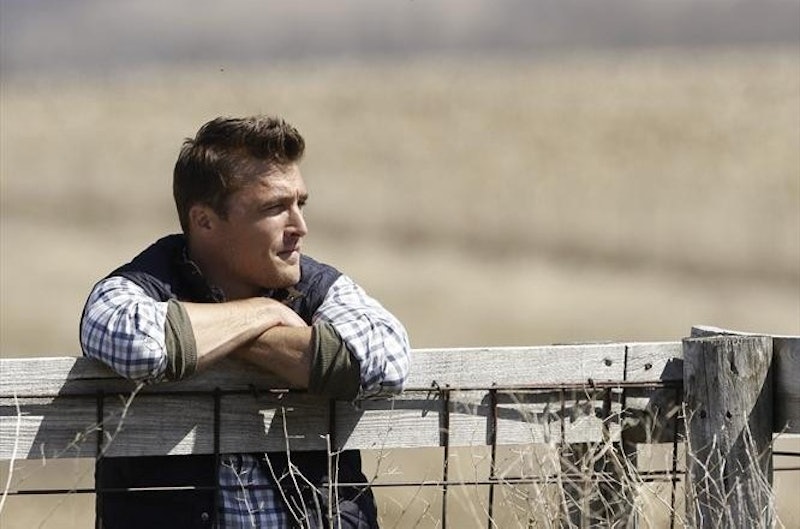 It's the most wonderful time of the year, guys — and not just because Christmas is right around the corner. We are just a month out from the season premiere of The Bachelor , starring Bachelorette Andi Dorfman's castoff Chris Soules, and the most recent promo for the show promises an extra large helping of drama. The man ABC has affectionately dubbed Prince Farming is getting another crack at finding love on reality TV, and it definitely sounds like emotions will be running high. The promo shows more than one of the contestants in tears, something I'm normally inclined roll my eyes at, but this time, it might be about something serious. The promo ends with a blurred out pregnancy test, so the question begs to be asked: Did Chris get one of his contestants pregnant?

Although no spoilers that give us any answers have been released yet, I'm going to say no. First of all, when over the course of filming would Chris have time? According to Bachelor guru Reality Steve, filming takes place over a two month period, so that timeline pretty much negates that theory on its own. He and his gals aren't granted any alone time until the Fantasy Suite dates, and those are so close to the end of the competition that I doubt his top picks would have a chance to exhibit symptoms of pregnancy, let alone get a pregnancy test before filming wrapped. And considering the way the human body works, the woman in question would have to be on a Michelle Duggar level of fertility to meet Chris, get pregnant, and actually realize she is pregnant that quickly.

My best guess here is that one of Chris's contestants showed up to The Bachelor filming with child (or suspecting she might be with child) from an old flame. If that's the case, why make it sound like Chris might be the dad? Because drama, of course. And also because ABC tends to be the absolute worst when it comes to Bachelor promos, which are generally extremely misleading for the sake of drumming up viewers. Can you blame them, though?

And if someone is pregnant while on the show, I can guarantee the situation will be fully exploited for our viewing pleasure. Would a contestant's pregnancy affect the likelihood that Chris would choose her as his winner? This season, we might get to find out.

More like this
Gabby & Rachel Reveal How That 'Bachelorette' Rose Ceremony Twist Happened
By Grace Wehniainen
Former 'Bachelor' Producer Elan Gale Knows The Secret To Your Favorite Shows
By Samantha Rollins
Everything To Know About 'Bachelor' Host Jesse Palmer
By Justice Namaste and Radhika Menon
Where Is Clayton Echard Now? The Former 'Bachelor' Star Is Dating Susie Evans
By Kadin Burnett
Get Even More From Bustle — Sign Up For The Newsletter