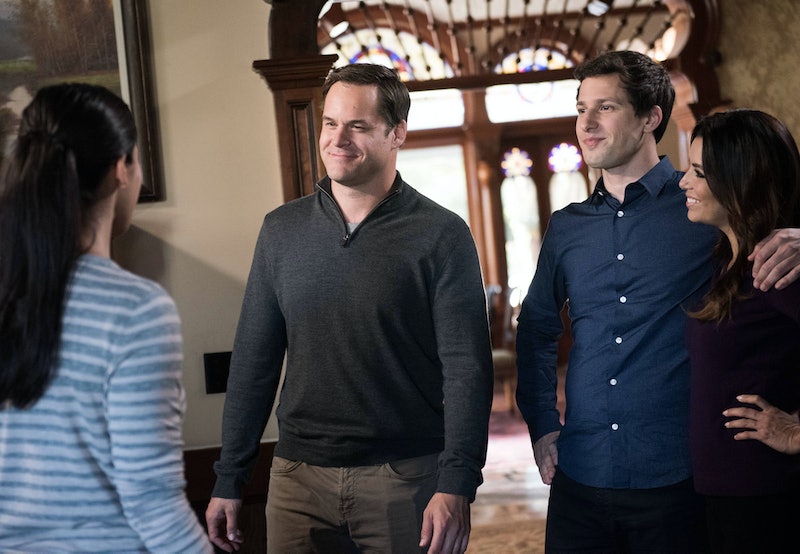 Could it really be happening? Has the day we've been waiting for since Season 1 of Brooklyn Nine-Nine finally come? Are Jake and Amy going to make it offish and become a full-blown couple?

Well if you had lost all hope that these two crazy kids would ever get together, you're going to regret that decision because the Nov. 30 episode of Brooklyn Nine-Nine reignited the "Will they or won't they?" internal dilemma we've all suffered from since Season 1 of the FOX comedy. If you've been watching Brooklyn Nine-Nine, you know what I'm talking about. We've watched these two detectives have a playful and mocking rivalry, which turned into a friendship, which turned into Jake's romantic feelings for Jake. But all of that turned out to be just a tease as Amy got together with Teddy, a detective from another precinct. Now this season, Jake has been courting Sophia, a defense attorney played by guest star Eva Longoria.

But just because it looked like there were two happy couples on Brooklyn Nine-Nine doesn't mean things can't change just as quickly. A trip to upstate New York to transfer a perpetrator to Brooklyn forced Jake and Amy to not only confront their relationships with their partners but also their own relationship. You see, Jake invites Sophia to come along so they can share a romantic evening in a creepy doll-themed room at a bed and breakfast. When it looks like Amy is jealous of Jake's spontaneous and seemingly passionate relationship with Sophia, he decides to tip off Teddy and have him join Amy at the bed and breakfast so she can have a lovely weekend, too.

This would appear to be a nice and thoughtful gesture from the often scatter-brained Jake and also one that shows he really has gotten over Amy. But that's not what happens here at all. When Jake springs the news of Teddy's weekend visit to Amy, she's not having it because she's about to break up with Teddy. In the words of Jake during this episode, "Nooooooooo."

Yeah, the couples retreat turned out to be as bad as you think. Amy likes to plan for everything, so you can't just surprise her like this without encountering some major consequences. She had a well-lit Korean restaurant and was in the middle of outlining a break-up speech to let Teddy down easy. Instead, she just blurted out that she wants to break up with him over what was supposed to be a romantic dinner.

Ouch. What a way to go. However, it got really interesting from here. Teddy said the reason the relationship didn't work out between them was because Amy still had feelings for Jake. This was of course news to Sophia, who wanted to rip off a few dolls' heads at first before Jake explained he doesn't have those kind of feelings for Amy anymore. However, the fact that Amy has finally reciprocated Jake's love for her, albeit a bit late, is a big deal.

So what have we learned today, kids? The thrill of the chase is alive and well on Brooklyn Nine-Nine. When Amy was unavailable, Jake wanted her, and once Jake became unavailable Amy wanted him. But just because things seem all peaches and cream between Jake and Sophia now doesn't mean Jake and Amy will never become a couple. On the contrary, I'm sure we will revisit this case time and time again this season.

The final moments of this episode are especially indicative of that. It was subtle, but at the end, Jake busted Amy's chops for admitting to like-liking him, which he will probably continue to do throughout the season. These kind of lighthearted insults are the cornerstone of Jake and Amy's relationship and why they ultimately work so well together. There will come a day when the kidding stops, and these two characters will express their feelings for each other for real, though. I just know it.