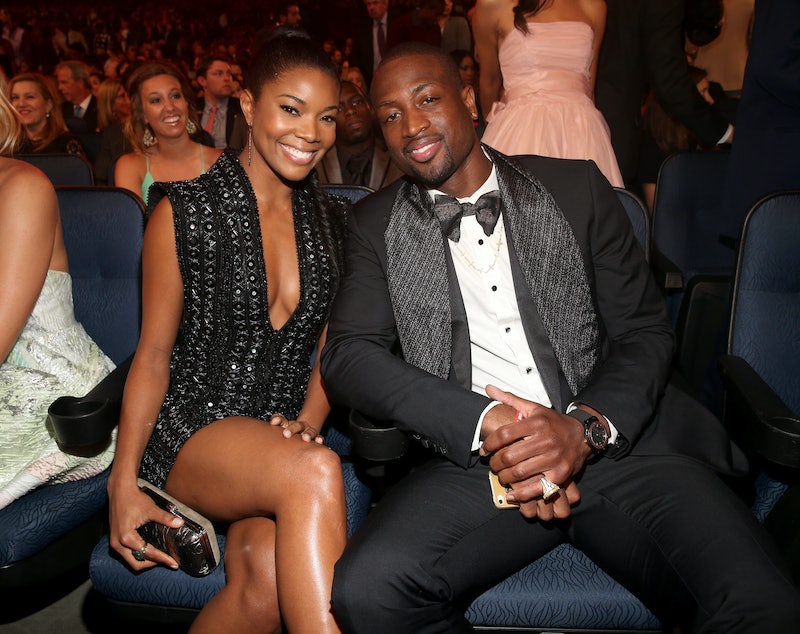 As applies to most Hollywood couples as far as I'm concerned, I can spend hours drooling over Gabrielle Union and Dwyane Wade's life together on Instagram. It's not that they're super good looking and successful — that's just about every celebrity couple. And it's not because the diamond on the engagement ring Wade gave Union last winter was the size of my head, either. Mostly, it's because they seem to be a real team. They cheer each other on, and they goof off together, too, and to find a couple so supportive of each other can be a rare thing. Which is why when I investigated how Dwyane Wade and Gabrielle Union met, I was surprised to find out that their relationship almost didn't happen at all.

Although they tied the knot in August, what the couple has affectionately dubbed the #WadeUnion didn't get happen without overcoming a few obstacles first. They first met in a pretty conventional way in 2007: while co-hosting a Super Bowl party. Except, of course, they were being paid by promoters to be there instead of doling out chips and beer in their living room like everyone else who's ever hosted a Super Bowl party. The sparks didn't fly right away, though, and Union approached their budding relationship with a solid amount of doubt.

"[Wade's resume] looked like crap," Union told Vibe shortly after their engagement. "Athlete, going through a divorce, nine years younger than me. Then, after I had a heart-crushing breakup with yet another immature jerk, I thought, it can't be any worse if I date a fetus. Let's just see what happens."

Date a fetus, she did, and I'm willing to assume she's pretty happy she took a chance on Wade. They made their first official public appearance as a couple on a red carpet in 2010, although rumors had been swirling for years that they were dating during the time Wade's divorce proceedings were going on with his ex-wife (and the mother of his sons), Siohvaughn Funches.

Even then, it still wasn't smooth sailing. Wade and Union briefly broke up in 2013 which Union attributes to "distance and scheduling," and during their break, Wade ended up conceiving a son with a woman named Aja Metoyer. Um, awkward? But if it hurt their relationship, Wade and Union were able to make the necessary repairs, and it's a good thing they did, because less than a year later, they would end up having one of the most beautiful weddings ever.