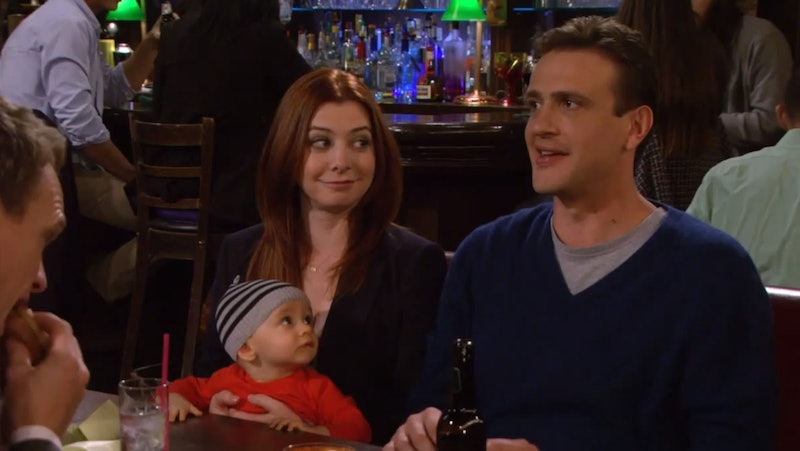 Being that most of my friends still don't have kids, and that I spend most of my time around my kid, there are moments when we're all hanging out together and those two worlds collide: I'll momentarily step outside the realm of Normal Civilized Adult Behavior, and forget that the Code of Acceptable Parenting Behavior is utterly foreign to my child-free pals. In other words, I'll casually do something gross involving my toddler like it's totally normal (because to me, and to all parents, it is normal), and my friends will fight the urge to puke all over my rug (not that it would be a big deal if they did; I would just catch it with my hands like the mom-boss I am).

Before I became a mom, I was not—what's the word I'm looking for?—a completely vile person who lacked all semblance of boundaries. I actually wasn't even close to that. I liked to be clean (I still do, actually. I'm just bothered less if I can't be totally clean at all times), and could safely say that my pristine hands had never touched another human's vomit, nor another human's asshole (outside of a recreational context, anyway). But alas, there comes a point fairly early in one's parenting life when the desire to uphold the strictest degree of sanitation and decorum is superseded by a need to problem-solve and maintain the emotional and physical homeostasis of all the people living in your house. And once those things take top priority, your means to achieving them can become...a bit unsightly. The following are things we've all done as parents. To everyone else: Sorry we're not sorry ¯\_(ツ)_/¯

1. Stuck a finger up a constipated baby's butt to get that shit moving

I mean, it works.

2. Sucked snot directly out of a kid's nose

Little-known fact about small children: They are the goddamn worst at blowing their own noses. It takes them several years of life to even comprehend the notion, and several more years to do it effectively. Sometimes your options are "deal with a whiny, congested, miserable little kid whose entire life would be fixed with one solid nose-blow" or "suck it up, literally." This sounds inconceivably disgusting until you've spent days on end listening to all that infuriatingly loose snot flop around inside your bummed out kid's face. The relief will be worth the gross factor for both of you.

3. Caught vomit with our hands

The concept of aiming your vomit into a sturdy, reasonable receptacle is not something your kid is likely to grasp for years. Gross, vomit-covering-everything, dear god, why is it blue? years. So there will be moments when it's either vomit goes on the rug or in your hands—guess which is easier to clean.

4. Dug out boogers with our fingers

You know that satisfying feeling with you pull a truly fuckin' meaty booger out of your nose? Upon becoming a parent, you will quickly develop a similar sense of disgusting pleasure at extracting those little nuggets from the faces of your dexterity-lacking progeny.

I'm sure every doctor in the world would correctly advise against scraping the inside of your child's ear with your finger or fingernail, buuuuut we're pretty much going to keep on doing it anyway.

6. If you were already gross, you got extra gross before changing clothes/showering

Let's say your kid has already pooped on your shirt, so you know that shirt needs to be changed. Might as well take the opportunity to dig all the boogers and earwax out of your child's head and wipe them on your shirt right now. Hey, it has to happen at some point, and the shirt is already dirty! Let's not pretend we were ever going to get a tissue for either of those mucus-y substances—they were always going to end up on our shirt. One super dirty shirt > several less dirty shirts. It's better for the environment!

7. Stared really, really intensely at poop (and probably poked around in it)

Is your baby sick? Did he pass that nickel he swallowed? Is that glitter? Welp! Pretty much only one way to find out! Seriously, it is tremendously unsettling how often a pediatrician or nurse will ask you shamelessly detailed questions about your kid's excrement, all of which feels massively important to get right, and most of which can only be accurately answered by basically going on a scuba diving mission into your infant's diarrhea. Fun!

Usually this happens out of pure curiosity—how are you supposed to produce liquid food for another human out of your own body (the very idea of that never stops being insanely impressive) without, ya know, sampling the goods? Sample the goods! I once put my own breast milk in my coffee when it was the only kind of milk in the house. YOLO.

For the uninitiated, "cradle cap" is, to simplify it, like really bad dandruff that a lot of babies get. It causes varying degrees of flaky skin on their scalp. Sounds innocuous enough, right? But think about it: First, a baby's scalp is way more accessible than an adult scalp, meaning that flaky skin is just, like, right there on the surface. And then there's the fact that your baby spends a lot of time with the top of their head facing your face, so it's seriously right there and OMG let me pick at it. It's true: Picking off flakes of a baby's cradle cap is something that A) all parents have done, and B) all parents have loved doing. I used to zone out while doing it. It's like meditation for the sleep-deprived new parent.

10. Tasted mysterious substances of all kinds

Look, you non-parents can sit here speculating all day as to what that purple, gooey shit on the coffee table might be, if that's how you want to handle things. If you need me, I'll be over here quickly dipping my finger in it, licking it, deciding whether it's grape jelly or melted crayon, and then cleaning it up, all in under 30 seconds. The Parent Taste Test also extends to possibly-spoiled milk (breast and otherwise), and anything on our kids' plates that either we want to eat or need to "prove" to them is yummy/not too hot.

11. Smelled literally anything and everything

If you think parents will stick a lot of suspicious stuff in their mouths to taste test it, you wouldn't believe the things we've smelled. There comes a point at which you get so used to the smell of baby poop that you can't just think that you maybe smell poop—it could be a phantom poop smell that is haunting your nose, and we really don't have time to be opening up diapers only to find that there is no poop in there. So we just stick that baby's ass RIGHT up next to our faces, give it a good whiff, and then know for sure what's what. The rapid "flip baby upside down, sniff ass, flip baby back right side up" move is a patented parenting maneuver and should not be attempted by amateurs.

Yeah, you don't think this sounds too gross (all people who are intimately close with one another share food! It's sweet!), but that's only because you haven't seen what "kid leftovers" look like. Or worse still, "baby leftovers". I'm not talking about taking a few steamed carrots off their plate (which we also do with impunity)—you see that soggy, half-eaten, saliva-and-snot-covered biter biscuit that is all but disintegrating after having been mashed in between a 1-year-old's fist and her face for the last 20 minutes? Yeah, if they're in the car, or there's no trashcan nearby, that baby's parent is definitely just going to stick that whole disgusting situation right in their mouth and eat it (and will chase it with a stiff shot of the stale dreams of their distant youth).

13. Not cared about pee being on something

Before kids, the idea of urine getting onto anything—hands, clothes, blanket, etc.—was not an all-out tragedy, but it was definitely grounds for putting life on brief pause and getting all soiled items hastily to a washing station. But after enough time of dealing with all the other relatively far more disgusting aspects of parent life, you really start to barely notice a little pee. Minor diaper leak on your jeans? Yeah, probably not changing those jeans, at least not with any real urgency. Get a drop of your toddler's pee on your hand while helping them use the bathroom? The only hard part about this is forcing yourself to remember to wash your hands because you're so unbothered that you almost don't even notice. Plus, urine has a lot of surprisingly beneficial uses, so you're not one to hate.

14. Used a shirt/scarf/whatever to clean up a serious in-public poop situation

There are some shit-uations which no diaper can contain, and you can almost guarantee that they will occur when you're far from home and completely without any of the tools necessary to deal with it. Like, you'll have one flimsy diaper (not even one of the good ones; one of the leftovers from that pack of organic diapers you bought that one time that are totally useless) and no wipes—and suddenly your baby's ass will just explode in a world-ending way. Parents have this unique ability to switch their vision and instantly be able assess the poop-cleaning ability of every item within arm's reach. And in those moments, no article of clothing is too valuable to escape doody duty. No one said this war would be glamorous.