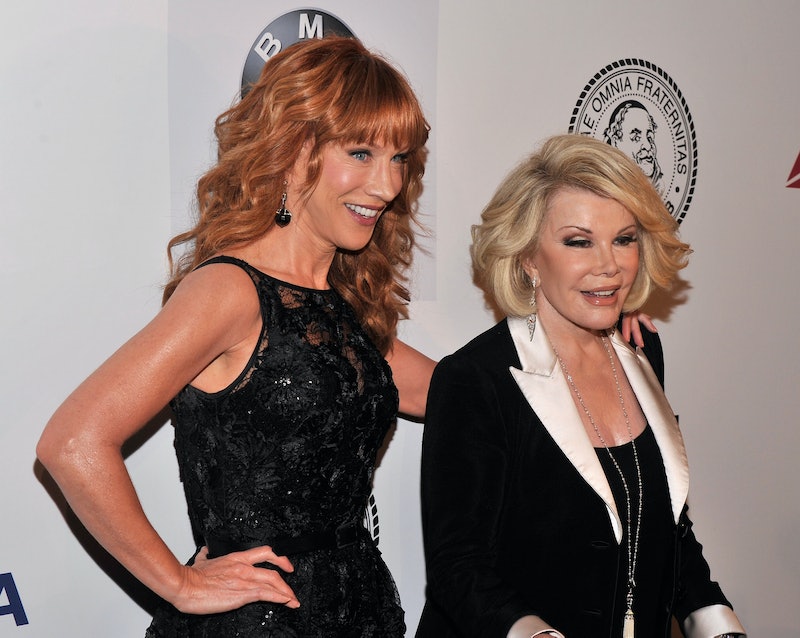 This might not be fresh news at this point, but Fashion Police has finalized where it plans to go after the tragic death of Joan Rivers in September. Not only is Kathy Griffin taking over as Fashion Police host, but she is also being joined by celebrity stylist Brad Goreski, who will be taking the place of co-host George Kotsiopoulos. However, this change in faces isn't the only revamp that longtime fans of the Fashion Police will have to deal with in the new season. There will be several format changes to the show as well that might make people a little, well, nervous.

According to Deadline, instead of remaining a weekly program, the fifth season of the Fashion Police will air 17 episodes a year, each "focused on the biggest red carpet and fashion events of 2015 including the Oscars, Grammys, Emmys, [and] New York Fashion Week." Griffin and Goreski will be joining returning panelists Kelly Osbourne and Giuliana Rancic for an unconventional version of Fashion Police that airs its first episode on Monday, January 12 — the day after the 2015 Golden Globes. The show was really in a bind considering their beloved host had passed away and left pretty big shoes to fill in her absence, so, honestly, they made a good choice with Griffin as Rivers' replacement. The two women have notoriously similar comedy stylings.

However, there's a difference between changing the host and changing the format of the show entirely. In a lot of ways, this can be a good thing. After all, Griffin might have a brand of comedy very similar to Rivers, but she is not a replacement for the legendary comedian. Calling her that would be an insult to both women, implying that Griffin is nothing more than a bargain basement version of Rivers and that Rivers' legacy is capable of being replaced or replicated. Both women deserve much more credit than that. Changing the format of Fashion Police now that Griffin has taken over marks a clear divide between Rivers' Fashion Police and Griffin's Fashion Police. It allows Griffin to make the show her own, instead of constantly feeling like she is living in Rivers' shadow or messing with her legacy.

Griffin's original statement on the matter of her hosting Fashion Police was, "I don't know if the situation is correct at this time for me or right for me at this time. I really hope they continue in the spirit of Joan’s work. She brought a fearlessness and a brand of humor into our homes that we really need." Considering Griffin is now confirmed to have accepted the position, it makes sense that she would want to do it on her own terms. Carrying the burden of having to continue the Fashion Police exactly as Rivers had done it for the last four seasons is too much to put on anyone, especially someone like Griffin who was a friend of Rivers. So, in that sense, I'm glad they changed the format in order to allow the show to grow into a new era sans Rivers.

At the same time, this move is risky and unfair for longtime fans of the show. From their perspective, not only have they lost the host of their favorite program, but when it returns with a new host then it will barely resemble the show that it was before. Those sticking around despite the loss of Rivers might be put off by the loss of even more things that were familiar to them about the show — like the weekly format and co-host Kotsiopoulos. I have trouble dealing with my favorite show airing on a different night than usual, let alone dealing with any changes to the format or plot thereof. Completely revamping the show is asking a lot of patience from the fans to allow the show to grow and change with the new cast.

So, to Fashion Police fans who are ready to ragequit the Internet over this announcement, I say give the show a chance. If you really think about it, would you want to tune in every week to watch what would essentially have boiled down to Griffin trying her hardest to pretend to be Rivers? Would you really want to watch a show in which everything is the same except for the host, like an eerie, depressing weekly reminder that Rivers is gone? Rivers is an irreplaceable part of Fashion Police, that much is true. However, we are lucky enough that E! recognized the comedian would want the show to go on even if she couldn't make it there. And, for that alone, we all owe it to them to give the new format and hosts a chance to impress us.