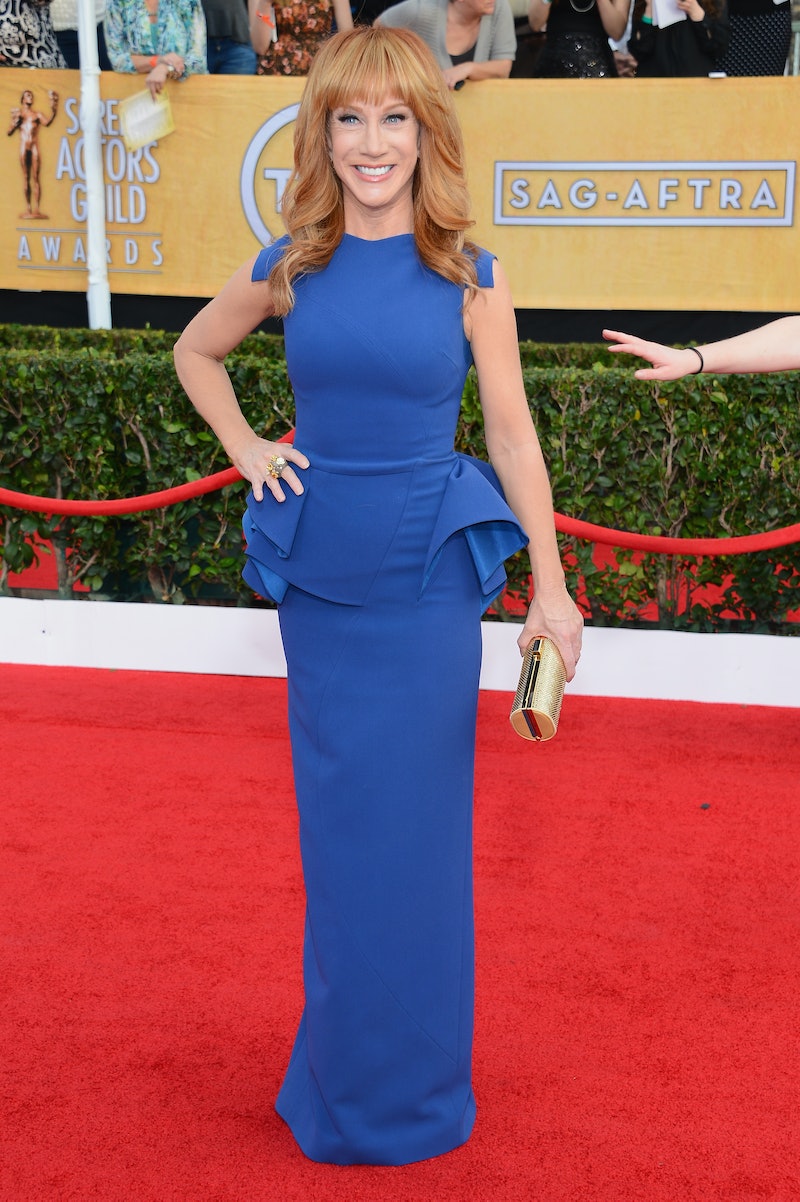 When it comes to the return of E!'s Fashion Police, there's just no replacing Joan Rivers. Thankfully the network and the comedian joining the show feel the exact same way. Kathy Griffin along with TV personality Brad Goreski will be joining Kelly Osbourne and Giuliana Rancic to take on celebrity red carpet fashion. Rivers tragically passed away this past September due to complications in a routine throat surgery. In the wake of her death, her fellow Fashion Police cast mates questioned how or if the show could continue without Rivers at the helm. However, Griffin seems like the right fit for the series even though a lot of changes are being made. Her stand-up is equal parts sweet and spice and she sure knows how to take on celebrity culture with absolutely no apologies. She would make Joan proud.

Griffin also admired Joan Rivers and considered her a friend, peer, and mentor. When Rivers passed away, Griffin reacted, "I will miss her forever." Griffin's reaction to her new role on Fashion Police is exactly what you'd expect from the spitfire comedian, “I get it! These are some big shoes I’m going to fill. Joan was truly one of a kind. Now I hope you will accept me for me, I’m just Kathy. Did I say I’m just Kathy? I meant I’m Kathy F***ing Griffin and you celebrities better strap yourself in, as I am taking no prisoners. I am not holding back so dammit let’s have some fun!”

Just in case you were worried Griffin couldn't dish it quite as big or bad as Rivers, here are some of her best lines:

On How to Dish

“I was raised right — I talk about people behind their backs. It's called manners.”

"[I would like to thank the Miami Beach police for saving me] as someone was drag racing down the street the other day, driving his Lamborghini with his dick."

On Being on the D-List

From her book Official Book Club Selection: A Memoir According to Kathy Griffin, “One of my recurring D-list moments is when people stop me in the airport and tell me they loved me on SNL. I never know if they think I’m Molly Shannon, Cheri Oteri, or Chris Kattan. I just say “Thank you. I’m glad you enjoyed me as Mango.”

On Playing Her Least Favorite Gigs

"It’s some tennis event at UCLA for MusiCares, like I know what that is. [Andre] Agassi is going to play [Andy] Roddick, and then they’re going to play doubles withDr. Phil and Gavin Rossdale. I hate that fat-ass Dr. Phil, by the way. That f***ing fascist.”

“Gwyneth Paltrow names her kid Apple. I'm not going to let that stand.”

“I’ve used Anderson [Cooper] in the way the lord intended, to get to his mother.”