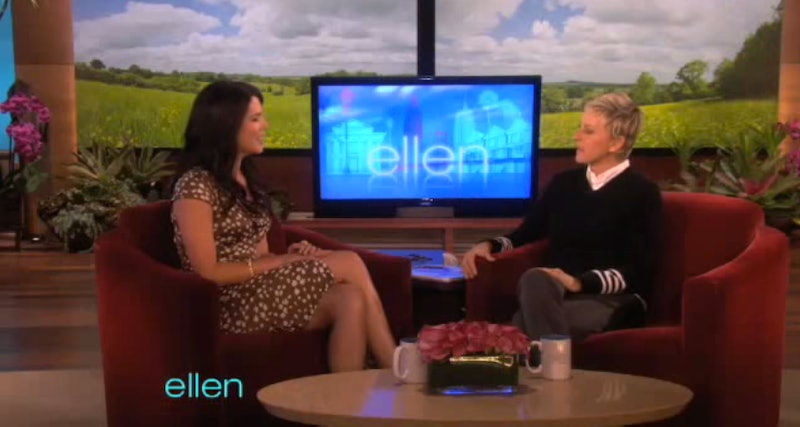 The TV development gods blessed us Monday with hope that they will hopefully not soon shatter through lack of pick-up: Ellen DeGeneres' production company is working with Gilmore Girl and Parenthood star Lauren Graham on Kate On Later, a show centering on a woman confronting the glass ceiling in late night comedy. I'm still living on Cloud Nine over the prospect of this show even existing, so what better time is there to explore the delightful history Graham and DeGeneres already have together?

Sadly, it appears that DeGeneres will not be appearing on the show if it gets picked up — she's a bit busy. But if you, like me, healed your Gilmore Girls wounds by bingeing on videos of Lauren Graham on various talk shows (she's the closest we'll ever get to a real life Lorelai, guys), it's probably not a huge surprise that Graham and DeGeneres are working together. The two have always had a really nice rapport, and they've talked about their off-screen relationship a bunch throughout Graham's many appearances on Ellen. Graham plays the fast-talking, scattered-but-obviously-intelligent wacky one, and DeGeneres is pretty perfect as her straight man. Graham was, in many ways, Jennifer Lawrence-ing talk shows long before Jennifer Lawrence landed on the scene — it's only fitting, then, that she'll (hopefully) be playing a talk show host should NBC make the right decision and go forward with this show.

Let us explore, then, the best of what Graham and DeGeneres together has given us in the past:

Before Graham shacked up with Parenthood co-star Peter Krause, Graham dated Matthew Perry for a hot minute. The two stayed good friends (Haha, get it? He was on the show Friends) DeGeneres was very determined for a while that the two get back together. I could show you approximately 10 different clips illustrating this fact, but someone over at The Ellen Show is seriously harshing my vibes by moving all the old Ellen clips from Youtube to the un-embeddable official site. Dangnabit!

I feel you, Graham.

Graham Takes the Chance to Sing

First a song in honor of Gilmore Girls (HEART-WRENCHING) hundredth episode, then "Leaving On a Jet Plane."

You have to skip to 2:00 for this one. That tuxedo, man, it did have its puzzling moments.

Neither Of These People is good at Pictionary

But that's what makes them so delightful.

Graham recalls getting lost in Vietnam

Graham does not deal well with cleanses

This one, most tragically, does not have an embed code. Curse the Internet gods for me, please. But you have to watch it. If you're ever considering doing a juice cleanse, you must first watch this video of Graham on one on Ellen. The most hilarious possible cautionary tale.