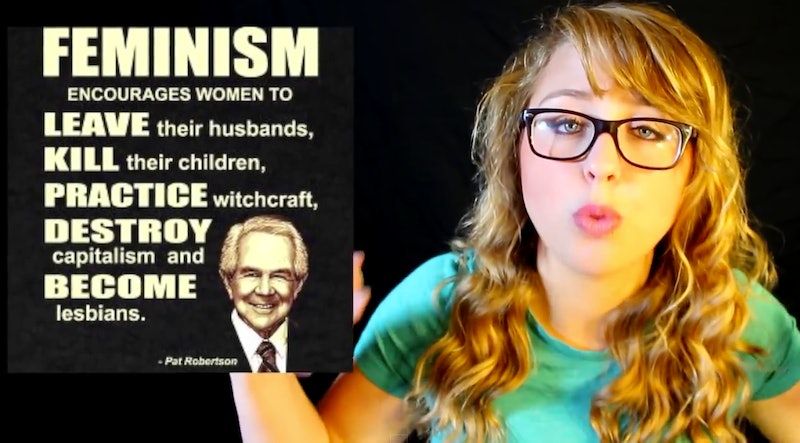 Feminism and YouTube do not mix. As a matter of fact, feminism and the Internet as a whole do not mix. In the past few months alone we've witnessed the atrocity that was #GamerGate, the celebrity nude photo leak, and a feminists read mean tweets series, all of which served to highlight just a fraction of the egregious sexism and objectification that plagues Internet culture and reflects the opinions of the people who sit behind their computer screens exacerbating it.

It's all a bit ridiculous. And in the face of this obvious sexism, feminism has somehow become a dirty word, with female celebrities dodging the label and media personalities conflating it with rage and misandry. A simple Google search for the term can be incredibly revealing, the autofills reflecting back at us the biases of a society that often thinks feminism is bullshit.

That being said, it's more important now than ever to support the few and the proud: the YouTubers and online personalities who are open and willing to explicitly define themselves as feminists, aka freely proclaim that they indeed believe in equality of the sexes. Oh, the scandal.

Here are five feminists changing the YouTube space for the better.

1. Laci Green did feminism so well, MTV gave her a show.

She also runs a series called "Sex+" on her own self-named channel where she addresses problems with pop culture and our society, presenting issues of feminism in a poignant, relatable light.

2. Stevie Boebi advocates for women of all sexualities.

Stevie is charismatic, fun, and an amazing voice for all women. Her channel tackles the stigma that comes with being bisexual in a world where people aren't comfortable with shades of grey, and talks about how to come out for the first time.

Marina runs a series on her channel called "Feminist Fridays" where she discusses feminism and sexuality. A large portion of her content is focused on the media's reaction to and depiction of feminism, including celebrities like Divergent star Shailene Woodley and her tragically misguided notion that feminism "discriminates" against men.

4. Hannah Witton (and the rest of us) still aren't really sure what the word "slut" means.

Hannah is witty and sweet, all while encouraging us to consider body image, modern beauty expectations and how we label one another sexually.

5. Tyrannosauruslexxx (Lex Croucher) reminds us all what "consent" truly is.

Lex is a feminist and human rights activist who also happens to be hilarious. She's covered everything from Blackfish to online dating and has no qualms with defining important sexual lines where they are otherwise lacking.