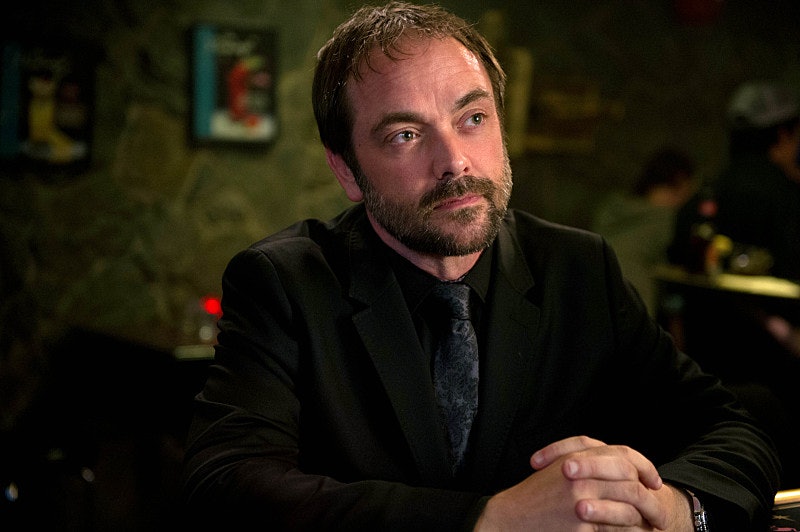 Step aside, Mary Winchester, because it looks like another mother is in town. Were you expecting Crowley to perplexedly exclaim, "Mother?" when spotting Rowena at the end of last Tuesday's episode of Supernatural ? I sure wasn't. Talk about a mother of a twist. I knew Rowena would be one mean witch, but I didn't expect her to possibly be mommy to the King of Hell himself. Now, we don't know for sure if Rowena is truly Crowley's mother. After all, this is Supernatural, and anything is possible.

What we do know is that Rowena is a "natural" witch, which means she was born with magic. However her coven, the Grand Coven, banished Rowena because her magic was "too extreme." Hmm... it sounds like Rowena and Crowley have a lot in common. Let's hope she does turn out to be his mother, because I'd like to learn more about Crowley's history. Where does this man come from? How did he get to where he is today? Why is he so scared of his mom? Seriously, when someone leaves Crowley speechless and grasping for words, you know they have quite the power over him. Things are about to get even more interesting.

Until we learn more, let's dissect what we know, so far, about Crowley and his family.

Before he became Crowley, the King of Hell and former King of the Crossroads was named Fergus Roderick McLeod. He sure doesn't look like a Fergus. Yeah, I much more prefer Crowley.

He Used to be a Tailor

Born in Scotland, Crowley was a tailor. Can you see him taking measurements and waiting on others? Absolutely not. Now, he might definitely take measurements of his victims' graves. That's much more believable.

Remember the episode "Weekend at Bobby's"? That's where we learned Crowley had a son named Gavin. However, they never had the traditional father-son relationship, and actually hated each other. It's all about torture in this family.

He Sold His Soul for a Few Extra Inches

So why did he sell his soul? According to Crowley, he exchanged his soul for three more inches so he could hit "double digits." I'm not sure if that's a joke, but it wouldn't surprise me. Typical Crowley.

And that's all folks. After 10 years, you think we would know more about this man. What a mystery, but I guess you get what you get with such a powerful, evil man. Hopefully Rowena is really mommy dearest and shines a brighter light on our favorite demon.