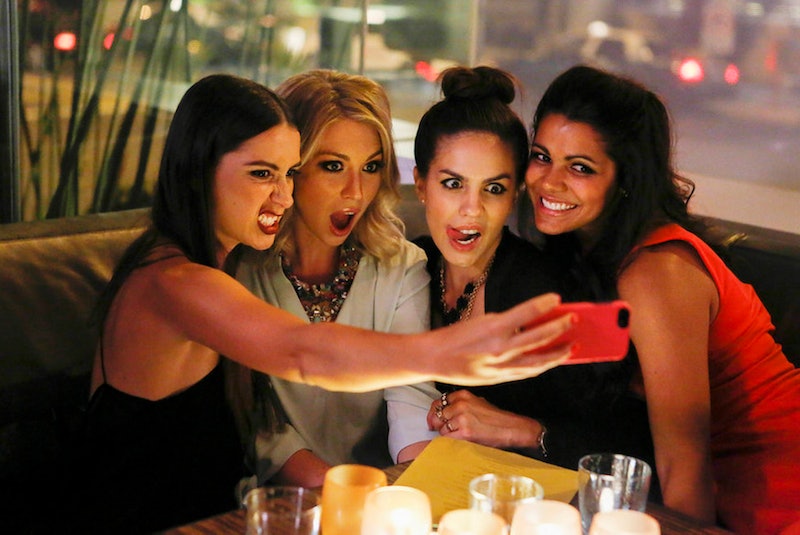 It's been a few weeks since one Vanderpump Rules cast member hurled infidelity accusations at another, but don't you worry. That wasn't the last cheating rumor of the season. Monday night's episode hit us with a brand new Vanderaccusation: Some time before the episode taped, Katie allegedly not only kissed a random dude’s neck, but motor-boated his crotch at a club. (Um, I'm sorry. What? Motor-boated his crotch? MOTOR-BOATED HIS CROTCH?! To quote Stassi, “Wait, do people do that?”) Jax and Scheana say they witnessed the aforementioned motorboat display. Katie denies it up and down. Tom Schwartz doesn’t care either way. He says hooking up with other guys is not Katie’s modus operandi, so if it really did happen, he'd dismiss it as being nothing more than a "piss drunk" one-off. Both Tom Schwartz and Katie want to let it go.

Something that hadn't dawned on me before: Prior to Monday night's ep, Tom Schwartz and Katie were the only two SURvers in the main cast who have not been at the center of at least one cheating scandal on this show. (OK, OK, Scheana’s drama happened pre-Vanderpump Rules, but I'm going to count it.) Looks like the universe/the producers/the stars in the night sky deemed it Katie's turn to be raked over the coals.

Did Katie actually motorboat a rando's groin and smooch said rando's neck? I don't know, man. Jax and Scheana stuck to their story, and Katie stuck to her story. I hoped for a definitive answer by episode's end, but that answer never came.

Next Monday, the script is flipped: Tom Schwartz is accused of cheating on Katie. OH, BROTHER. It never ends. (And thank goodness for that.)