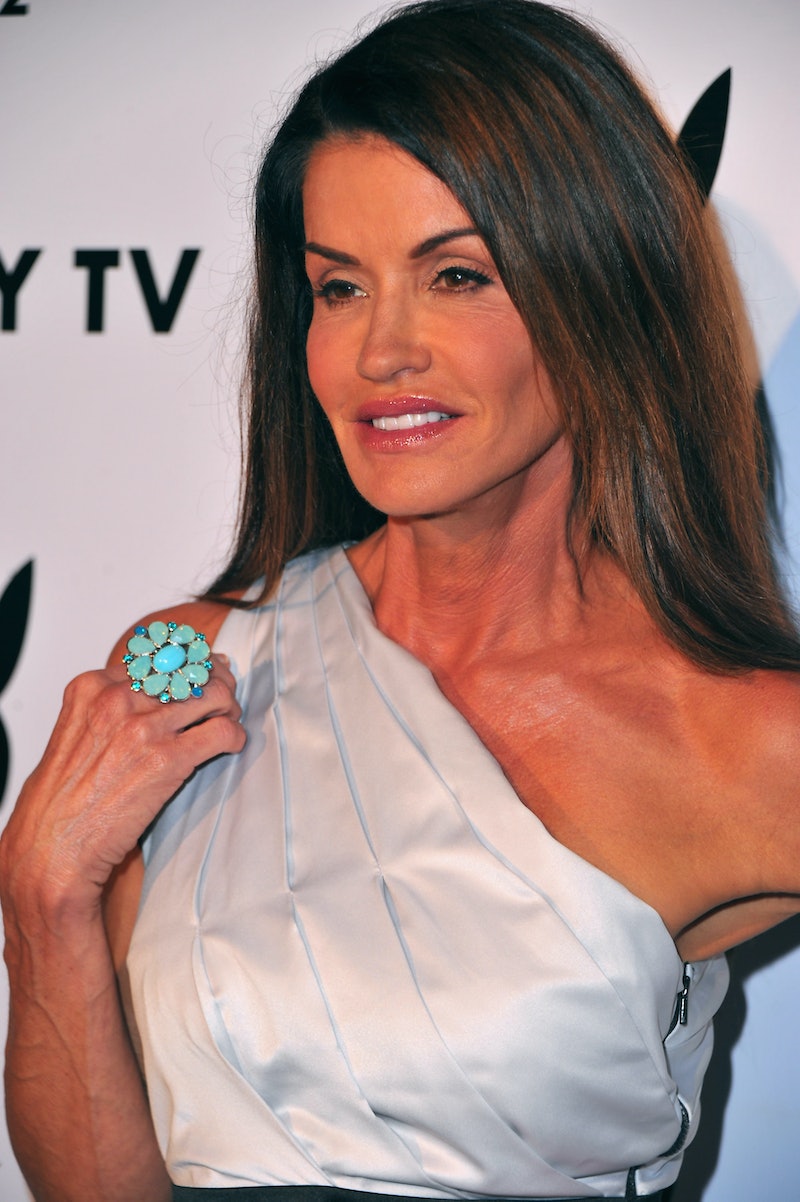 Janice Dickinson may have been silenced in the past, but she refuses to let that happen again. As just about everyone has heard by now, comedian Bill Cosby has been accused of sexual assault by over 16 women between 2000 and 2014, with new women stepping forward to either attach their names to previously anonymous claims or find the courage to make new claims they once buried. Supermodel Dickinson was among the women allegedly assaulted by Cosby and this isn't the first time she has tried to speak up about it. In an interview she did with CNN on Monday, Dickinson lashed out at Cosby's lawyers for their response to her allegations and revealed that she has photographs from the night the assault occurred.

After the supermodel first spoke out with her allegations, Cosby's lawyer Marty Singer broke their team's vow of silence to release a new statement in response to her claim: “Her new story claiming that she had been sexually assaulted is a defamatory fabrication... Neither Mr. Cosby or any of his attorneys were ever told by Harper Collins that Ms. Dickinson had supposedly planned to write that he had sexually assaulted her, and neither Mr. Cosby or any of his representatives ever [comminicated] with the publisher about any alleged rape or sexual assault about the book." Singer also called the claims an "outrageous defamatory lie," according to The Wrap.

In response to this backlash, Dickinson confessed new details about her alleged 1982 assault to CNN. The details were, of course, horrific, terrifying, and in line with the other stories made by other women claiming to have been assaulted by Cosby, but with a twist. It turns out that the supermodel took "several Polaroid pictures of Cosby in his bathrobe before she ultimately blacked out." After that, according to her:

The last thing I remember, I blacked out and Cosby mounting me like the monster that he was. And I was thinking what the heck — And I just remember passing out. But I remember more specifically waking up and there was a lot of pain downstairs. There was semen all over me and that my pajama bottoms were off and the top was opened.

The Polaroids aren't admissible proof of anything, in this case. By Dickinson's own admission, they are pictures of Cosby in a bathrobe prior to the assault — and, considering they were at his home when the alleged incident occurred, it's far from unusual or noteworthy for him to be in his bathrobe. That's quite likely why Dickinson didn't mention them before, knowing how easily they might be dismissed in a court of law. Still, that doesn't mean that she isn't justified in her anger at the response she has received from Cosby and his lawyers.

"I'm being slandered and called that I lie. Bulls*** attorneys! I am not lying," she said. "You weren't there. I can prove it with Polaroids. Put a lie detector on me and put a lie detector test on the attorneys and put a lie detector test on Mr. Bill 'Monster' Cosby." The common question that arises when a new victim steps forward with a claim against Cosby is, "Why did they wait until now to speak up?" That question seems a bit silly to ask of Dickinson, who wrote of an encounter with Cosby in her 2006 book. Still, she answered it anyway, just in case there were any lingering doubts about timing.

"I'm not out to get him," she said, dispelling another common statement against the victims — that they are out for money or fame. "I'm out to tell my side of the story so I can protect any woman in the world against this monster Bill Cosby and against anything or anyone that could rob an innocence like mine had been violated and taken away from me... I didn't do the right thing. I didn't report it. I didn't go to rape counseling. You know what? I was afraid, but I'm not afraid anymore."

Check out a clip of her interview below.