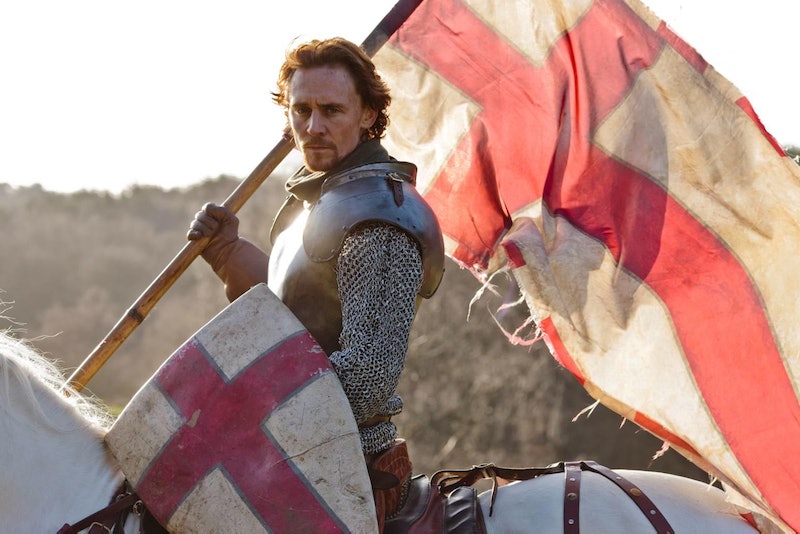 English teachers everywhere should be thanking Tom Hiddleston because he's singlehandedly made thousands of people actually care about William Shakespeare. It's only fitting that he pass his love for The Bard on, because it was actually Hiddleston's own English teacher who first instilled his love for the playwright. In a new documentary called Muse of Fire, Tom Hiddleston talks about why he loves Shakespeare and how his words seeped into his bones from the young age of 10.

"I had one of those English teachers who just believed in learning things by rote when you're young. Get it in the bones even if you don't understand it and you'll never forget it." Hiddleston says he remembers memorizing Macbeth in that class, and how the teacher's enthusiasm for the text helped Hiddleston learn to love it himself.

He's never looked back since, and claims that the two things he loves most in life are tennis and Shakespeare. "I’m a terrible tennis player, but I do get to do lots of Shakespeare," he admitted at Comic Con in 2013. But Hiddleston doesn't just love the playwright, he's a total fanboy for him and in turn his enthusiasm has encouraged his fans to take up an interest in the writer as well. I know Hiddleston would be proud of the following ways he's helped make people care about the legendary writer.

ANY TIME HE'S BEEN IN A SHAKESPEARE PLAY

There's only one reason why I would ever sit through a three hour Shakespeare play like Coriolanus and that's because of Tom Hiddleston. He originally captivated fans as Loki who then couldn't get enough of him. So when he did The Hollow Crown next and later Coriolanus they traveled right over with him. There they found that with someone interesting like Hiddles at the helm, Shakespeare suddenly wasn't just the boring stuff you had to read in school.

WHEN HE EXUDES PASSION

Let me tell you, Hiddleston wouldn't be half as effective in his portrayals of these characters if he didn't care so much. But he never does Shakespeare halfway. He commits fully to the character (and got actual injuries from his time in Coriolanus!) The power and passion he puts behind his delivery of his lines is what you remember, and what keeps you coming back for more.

BECAUSE IT MAKES HIM HAPPY

Anything that makes Hiddles happy makes me happy too. He even made me care about vampire movies again after he starred in Only Lovers Left Alive. I was sure Twilight had killed that genre for good, but Hiddleston brought it back to life just like he's resurrecting a love for Shakespeare.

WHEN HIDDLESTON MAKES SHAKESPEARE WORTH LISTENING TO

I read Shakespeare's sonnets in high school and they were pretty meh. But have Hiddleston read them and suddenly they take on a whole new life.

BECAUSE SHAKESPEARE HAS INFLUENCED HIDDLESTON'S CHARACTERS

It turns out Loki is just a mixture of a bunch of Shakespearian characters. Hiddleston drew inspiration from the illegitimate son part of King Lear, the ambitiousness of Macbeth, and the manipulation of Othello's Iago. But Loki isn't the only character that Hiddleston has infused with Shakespeare's writing. When he played the vampire Adam in Only Lovers Left Alive he drew from Hamlet's portrayal of "a doubtful, melancholic, sad sort." Without Shakespeare who even knows what Loki or Adam would have been like.

WHEN HIDDLES MADE SHAKESPEARE ACCESSIBLE

Hiddleston wants everyone to know that Shakespeare is not elitist and he hates when people elevate him to that level. "I get angry when people use Shakespeare as a badge of status ... as a sort of way of looking down at other people," he told the producers of the Muse on Fire documentary. "Basically when it's used to fuel snobbish attitude to the world or to exclude people. I mean that makes my blood boil."

Not a lot of things make Hiddleston mad, so it's adorable that what upsets him is when everyone can't enjoy Shakespeare. Yes, the words can be difficult and the ideas can be hard to understand, but Shakespeare wrote for everyone. Hiddleston desperately wants everyone to enjoy him as much as he does, so he'll defend him to the end of time.

BECAUSE WITHOUT SHAKESPEARE WE WOUDN'T EVEN KNOW HIDDLESTON

The actor admitted that what drew him to the profession was his love for The Bard, so without Shakespeare, Hiddleston might never have graced our screens and captured our hearts. If that's not reason enough to appreciate the playwright, nothing is.