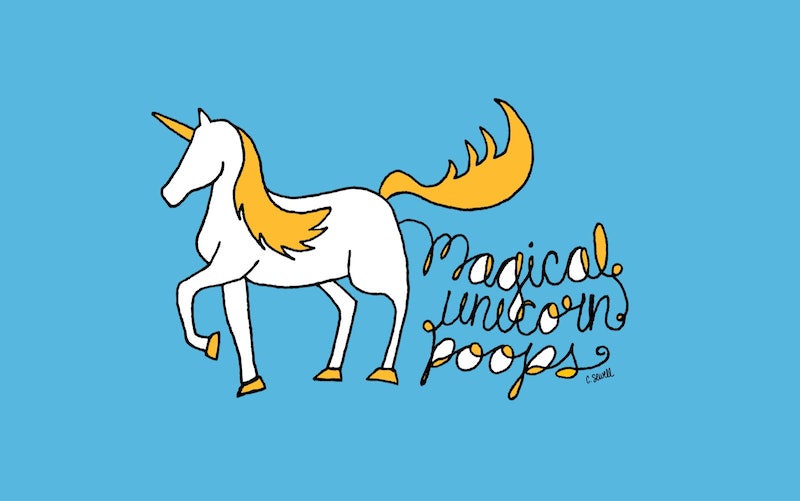 I hope I'm not overstepping my boundaries here, guys, but I think that we should talk about how your poop looks. Sorry — too much, too soon? Should we have had some warm-up talk about Mockingjay or Scarlett Johansson's secret wedding or something? Well, it's too late for any of those formalities; I am very sorry about that, but we're going to talk about everything you need to know about your poop, and we've gone too far to stop now. After all, for something we end up spending two to three years of our lives making, most of us know surprisingly little about what our poop might be trying to tell us. I mean, consider this for a minute: Do you really know what the different textures of poop mean? Why it's sometimes green, black, or red? Whether eating cheese actually makes you constipated? Why there are certain times of the month when women poop more? Or why, for that matter, saying the word poop still makes you giggle?

I thought not. Come along with me, as we investigate why your poop looks the way it looks, why it does the things it does, and what it might be trying to tell you when it changes form. Are you there poop? It's me, slightly grossed out.

Usually, you poop sinks to the bottom of the bowl like the Titanic. But sometimes, your poop floats near the surface of your toilet, like Kate Winslet in Titanic. What's up (sorry) with that? The occasional floating poop is usually caused by gas — and gas-inducing foods like bean sprouts or cabbage can make your poops rise. It's only a health issue if you find you're having floating poops frequently, or they're accompanied by an oily residue, which means your body might be having a problem absorbing fats from foods. But otherwise, don't worry — your fart will go on (sorry AGAIN).

Surely among the grossest and most startling poop types around, light-colored poop — the kind a doctor would refer to as "clay-like," because doctors are, frankly, totally foul — is usually caused by a medication you've taken recently, primarily Pepto-Bismol and other anti-diarrhea drugs. If your poop stays light-colored for a while, it could mean that you have a bile duct obstruction or other internal issue, so go see your doctor.

Green poop is so common, it even got a shout-out in the "Mr. Hankey" song. We've all had green poop because we've all eaten leafy green vegetables, one of the primary causes of green poop. The other culprit behind poop that makes it seem like it's St. Patrick's Day inside your toilet bowl? Bile, the chemical in our stomach that helps us digest fats. Bile is yellow-green, and when food moves through our intestines too quickly —because, say, we have diarrhea — bile doesn't have a chance to break down completely, leaving you with some festive poop. Food coloring and some iron supplements can also leave you with jolly green poops, but green poop is almost never a cause for concern.

We've all had the occasional black poop, and usually, it's nothing to worry about — food additives like the dye that turns licorice black can tint your poop, too, and in some cases, Pepto-Bismol (really, again?) can even turn your poop black. But if you're getting consistently black poop, and haven't been consuming anything with black dye, hit up your doctor — it can be a sign of internal bleeding, which can be caused by scary health issues like an ulcer, or even colon cancer.

As anyone who has eaten a beet salad, forgotten about it, and then had a red-colored terror poop a day later knows, the foods you eat can color your stool. Beets and red-colored dyes, like the ones found in popsicles, can often turn your poop red and make you falsely assume that you are dying of internal hemorrhaging. Of course, actual blood in your poop is a serious matter — it can signify anything from an anal fissure to hemorrhoids to cancer. But the next time you freak out over a red-tinted toilet bowl, try very hard to remember what you ate in the past few days. Like the skit says: it's probably beets.

So why does getting your period tend to make you poop so much? Well, a group of hormone-like compounds called prostaglandins are how your body communicates to your uterus that it's time to contract and slough off the uterine lining. But prostaglandins can go also astray ... and hit you right in the bowel. And when prostaglandins hit your bowel, your bowel contracts just like your uterus, creating the common "wave of non-stop pooping" that can enrich our menstrual lives. Fun!(?)

Poops that don't look like the traditional cartoon poop — meaning anything from small mushy lumps, to poop with a near liquid texture — are usually diarrhea. But what causes diarrhea? It's actually what happens when your body is cleaning toxins, viruses, or bacteria out of your intestinal tract, and most adults get it about four times a year. Foods and drinks can also cause diarrhea — and yes, I am talking about the infamous "beer sh*ts." But booze isn't the only thing making you run to the can: caffeine can also cause diarrhea, and so can fructose, which is why your attempt to "get healthy" by eating ten oranges in one sitting ended in tears. You can usually just wait out diarrhea, though if you're getting it often, you might want to rethink some elements of your diet.

POOP WITH STUFF IN IT

Does your poop reveal whether you got the mild or corn salsa the last time you went to Chipotle? If so, don't sweat it: corn, seeds, tomato skins, and other pieces of healthful fiber are supposed to come out in your poop. It's totally normal, and doesn't mean that your body is having any kind of difficulty breaking down food, so just roll (or poo) with it.

Frequent pooping can be a sign of a health problem, like Crohn's or hypothyroidism, but in those cases, it's usually accompanies by other symptoms, like abdominal pain, or rectal mucus, so don't automatically assume that frequent pooping is related to illness. Frequent poops can also be due to positive lifestyle changes, like exercising more often, or consuming a more fiber-filled diet. In which case, good for you! And you may want to consider getting some more magazine subscriptions (you know, for the times when you forget your phone).

Nobby, lumpy poops that are painful to pass are the second-worst thing to ever happen in bathrooms (the actual worst is, of course, when you find a spider in the shower after you're already in the shower). Whether they come out in gross little compact nuggets, or as one big lumpy turd that feels like it is tearing you open, hard poops are a sign of constipation. But contrary to popular belief, constipation doesn't mean that you rarely poop —even if you poop every day, if those poops are consistently hard and/or small and marbly, that means that you're probably constipated. Happily, you can soften up your poops by eating more fiber, staying hydrated, and exercising.

Of course, plenty of people (including Alicia Silverstone) believe that eating a lot of cheese will stop you up like the majestic Hoover Dam. But is that actually true? Turns out there's not a magical element in cheese specifically that plugs up your pump; cheese is just one of many low fiber foods that can cause constipation. So feel free to keep housing those string cheeses; just make sure that you're also eating a lot of high fiber foods as well, and staying active (exercise helps you stay regular, which may explain why, no matter how noble and spiritual your intentions, you will probably fart during yoga class).

And remember: Ain't no shame. Everybody poops.