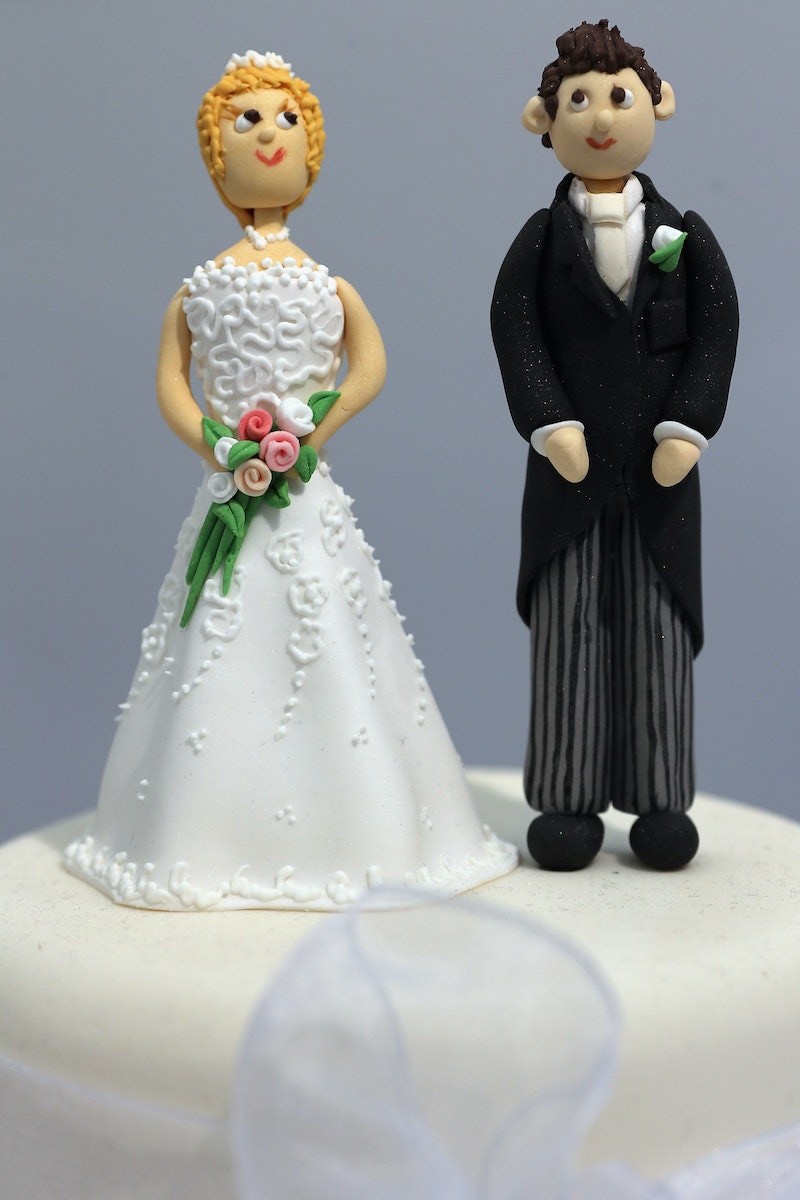 Full disclosure: I wore a cheap wedding dress on my big day. I got married in September, whilst on a trip to Scotland during which I thought I’d be visiting my boyfriend’s family and hiking amongst Highland cows. But while we were there, my SO — his name is Jack — popped the question. And we were married the following day in a Downton Abbey-like estate at a ceremony Jack had been secretly planning for months. I know — it would have been really awkward had I said no.

Prior to the trip, my sister helped me shop for a dress — one I thought I’d be wearing to a fancy Scottish dinner. Being in on the ruse, she subtly steered me away from anything blue or green or short, until I finally landed on a more bridal-y beige, floor-length number from Nordstrom. It cost $100.

When I talk to people about my wedding, the thing they most want to know about is not the guest count (18, including my family who flew in from the states), the reception (an a la carte dinner, followed by chocolate whisky cake), or the kilts (no, there's nothing underneath).

No — what people want to know is whether I’m upset I didn’t have the full-on Kleinfeld experience. And of course they’re curious, what with Oscar de la Renta proclaiming the wedding gown to be “the most important dress in the life of a woman,” brides wearing million dollar ensembles made of peacock feathers, and the average I-do attire costing a mortgage payment.

This isn’t just an outfit, people say. It’s the outfit. It’s the stuff of little girls' dreams, and the source of more Bridezilla meltdowns than party favors, bouquets and place settings combined. It’s even fueled an entire niche fitness industry for the en-fianced. Wedding workouts! Bridal barre classes! Consummation Cross-fit! (Yes, I made that last one up, but you never know.)

Yet, if I had to do it all over, I wouldn’t change a thing. OK, maybe I wouldn’t stuff myself with beer and haggis for a week prior to the big day, but I’d wear the same dress. Don’t misunderstand; it’s not some kind of protest against the wedding industrial complex — I love a Say Yes to the Dress binge as much as the next girl and, admittedly, I know women who are thrilled with their choice of a traditionally expensive wedding frock. It’s that sometimes, even when it comes to The Dress, spending less really can mean more. Here are just 8 reasons why:

1. Because science says so

Researchers have discovered that it’s experiential purchases, not possessions, which make us happiest. According to The Atlantic, the former “are more associated with identity, connection, and social behavior.” In other words, you’re better off saving your cash for a kick-ass honeymoon.

You know how New Year’s Eve is usually the dud of all holidays, because it’s the most talked up? Spend a chunk of your life’s savings on a gown, and you’re setting the bar of expectation dangerously high — not just for your husband-to-be or your judge-y Great Aunt Eleanor (they ARE noticing the custom whirlpool beading in your bustle, right?!), but for yourself. What happens when you wake up the morning of the big day feeling bloated, or with the zit-to-end-all-zits brewing front and center? When you’ve put so much pressure on getting your wedding look just right, these things will be all the more panic inducing, making it even harder to stay in the moment. And when it comes to having an awesome time at your own nuptials, experts say, it’s being present that matters most.

3. Because the photos are forever

Even if you do love your look on the day you exchange vows, chances are you’ll have a what-was-I-thinking moment 15 years from now nonetheless. Brides may be deep into the strapless trenches currently, but remember, it wasn’t that long ago that puffy sleeves were the piece-de-resistance of wedding attire. Trends come and go — no matter how much you spend.

4. Because you may want to destroy it

While not everyone is a fan of trashing the dress, the relatively new tradition can make for some killer post-reception photos. But the pictures come at a cost: the guilt you’re going to feel submerging, setting on fire, or generally wreaking havoc on what’s likely your priciest wardrobe piece. Unless, of course, it was a bargain find.

5. Because it’s a one-hit-wonder

Red carpet gigs notwithstanding (See Kaley Cuoco and Keira Knightly), chances are you won’t be wearing your gown much after its four hours of fame, even if you maxed out your credit card to buy it. May your dress rest in tiered ruffle peace.

6. Because cheap doesn’t have to look cheap

More quality retailers are responding to demand for affordable gowns. J. Crew and Ann Taylor both offer options for under $500, and at used dress sites like Oncewed.com you can find designer labels at a fraction of the cost. Think of your discounted dress as just one more reason for a champagne toast.

7. Because buyer’s remorse is the worst

There’s a reason only four percent of couples are willing to go into debt for their dream wedding ceremony — the future is expensive. Sure, you could buy that silk Vera Wang that you’ll pass down to your future child someday. Or you could put future child through a semester of college instead.

8. And like I said, because it’s not about the dress

Pop culture be damned! If, at the end of the day, you’re married to the partner of your dreams, it doesn’t really matter if you’re wearing a stunning Pninia Tornai creation or a pair of velour overalls. I don’t care that Amal got seven figures for pictures of her in her gown (money which she and George gave to charity). And I don’t care that “Wedding Dress of Kate Middleton” has its own Wikipedia page, or that 1.6 million viewers (myself included) tuned in to season 11 of Say Yes To The Dress . It’s not about the gown. It’s about the love, the romance, and most importantly, the commitment. (But please, for the love of all things bridal, don’t wear a pair of velour overalls on your wedding day.)