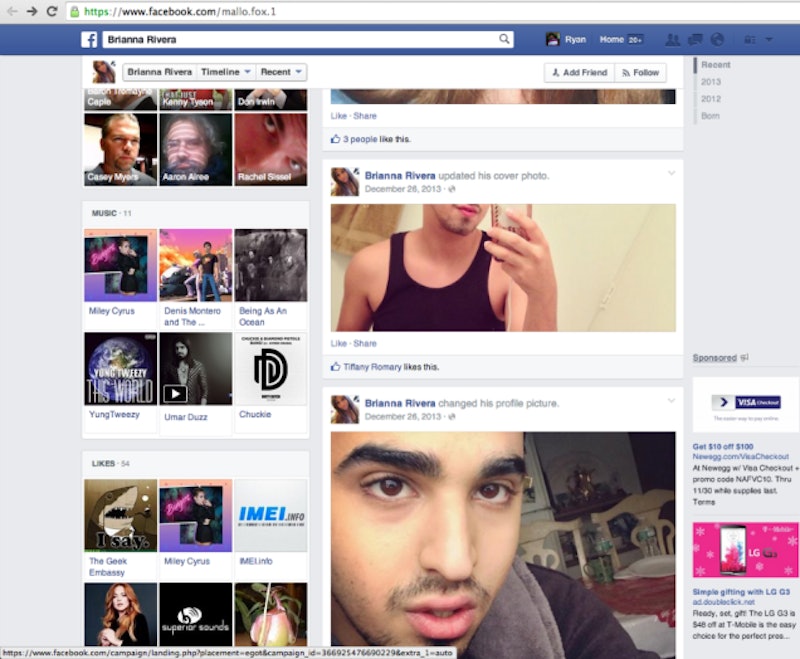 You might want to be more careful about who you date, y'all, because this week one woman's ex posted a fake racist rant on the popular Racists Getting Fired Tumblr in an attempt to get her fired from her job at AMC. Brianna Rivera's ultra-vengeful ex-boyfriend changed his Facebook profile to look like hers, posted a slew of horrible racists remarks about Ferguson (if you so wish, you can read them here), and then screenshotted them. And you thought your ex was a jerk.

Having a few hundred of your “friends” and family think you’re a heartless bigot would be really bad, but thanks to the Racists Getting Fired Tumblr, Brianna’s problems didn’t stop there. The blog reposted the screenshots of “Brianna’s” comments, and soon the post was reblogged tens of thousands of times. And, as the blog encourages (and as you can guess by its name), people from all corners of the Internet started calling and tweeting Brianna’s workplace, demanding she lose her job.

However, thanks to one brilliant Tumblr detective, the ruse was discovered before any firings took place and this story has a sort of happy ending. Racists Getting Fired issued a correction of sorts, and AMC Lowes (Brianna’s employer) even defended her on Twitter.

Now, I know what you’re all thinking (or maybe I was just the one thinking it because I’m a sadist). “What happened next? Did the internet turn on the ex-boyfriend? Did they get him fired from his job since he’s surely a racist for thinking all that garbage in the first place?” I’m sort of surprised to say it doesn’t look that way. Aside from correcting the error and everybody reaching a consensus that this guy is literally the worst, we didn’t get the revenge-on-the-revenge-plot we may have been hoping for.

I think the main lesson to be learned here (in addition to not doxing and harassing people because, seriously, not cool guys) is to think before you share, especially when you’re talking about ruining someone’s reputation and future employment opportunities. Even though it’s easy to get swept up in the mob mentality that is the Internet, not everything someone posts is true — shocker of the century, I know. I think our Tumblr Sherlock summed this whole fiasco up pretty nicely when he/she said, “f*ck this dude and shame on you for mindlessly reblogging this stuff.”