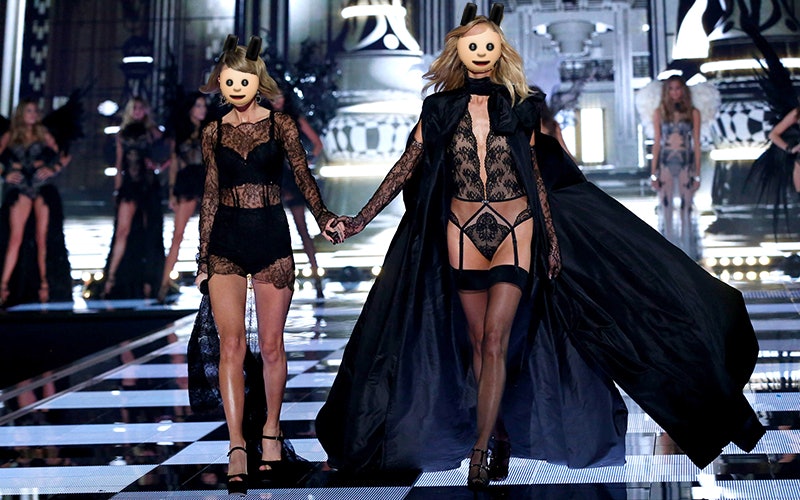 ICYMI, there was a pretty big party in London last night. The Victoria’s Secret Fashion Show took over the city for what’s sure to be one of the glamorous highlights of the holiday season, and it featured everyone's favorite celebrity BFFs: Taylor Swift and Karlie Kloss. The show won’t air until Tuesday, but it’s pretty much scientifically proven (not really…but kind of) that Taylor Swift’s performance will be one of the highlights. Why? Because if it’s anything like last year, Karlie Kloss will be rocking out to T. Swift’s songs onstage. I mean, they had to bring her back for a reason, right?

The supermodel and pop star became instant besties after last year’s show. They’ve gone on a road trip across the country, worn matching outfits while strolling around New York City, and sat in the front row at the AMA’s. Yeah, I’m sure they have a matching friendship bracelet or two.

But they kind of remind me of a certain emoji. They have short hair, are always wearing head-to-toe black, and aren’t afraid to show off their impressive dance skills. Sound familiar?

Here’s are eight times Taylor Swift and Karlie Kloss have proven to be the IRL version of the dancing twins emoji. You’ll never look at your texts the same way again.

1. At The Knicks Game

Come on. They both wore black for a reason.

2. During Their Road Trip

4. At The VS Fashion Show

Because you know they were waiting to bust out a move.

5. During This Legendary Moment

They don't hold back.

6. While Hanging Out With Jamie King

7. Backstage With A Few Angels

Why have two dancing emojis when you can have six?

They probably wanted her to bring the cat ears to complete the look, but she didn't. So that's awkward.

More like this
Christian Bale Sang With Taylor Swift & His Daughter Can't Believe It
By Radhika Menon
Did 'Grey’s Anatomy' Just Drop A Major Taylor Swift Easter Egg?
By Grace Wehniainen
Everything To Know About Taylor Swift’s 10th Studio Album, 'Midnights'
By Grace Wehniainen and Jake Viswanath
Hailey Bieber’s Moody Black Mani & Vampy Lips Are Peak Fall Vibes
By Audrey Noble
Get Even More From Bustle — Sign Up For The Newsletter