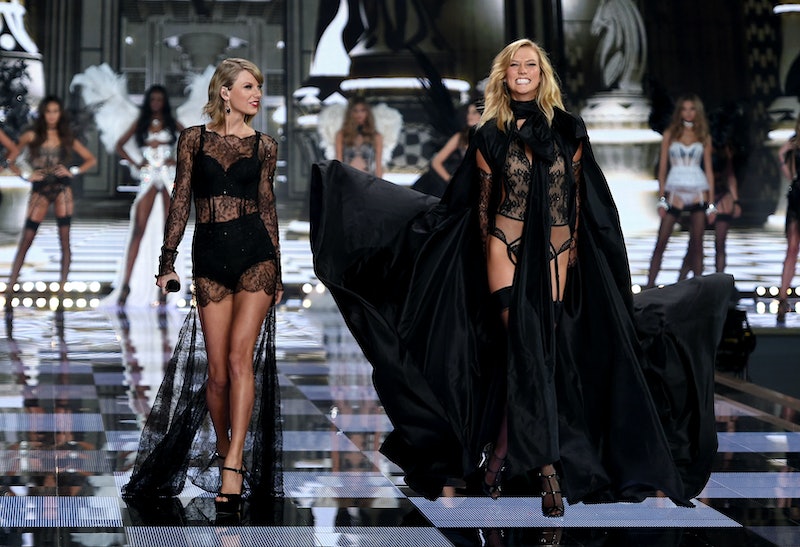 Taylor Swift and Karlie Kloss make no secret of their BFF-status. Whether it's onstage at a fancy fashion show, at a vegetarian cafe for some light lunch in Manhattan, or even online in Twitter mentions or Instagram photos, it seems undeniable that the two glamorous ladies are attached at the hip these days. Most recently, Taylor Swift and Karlie Kloss made international headlines for stealing the show at this year's Victoria's Secret Fashion Show, held in London. Swift performed a medley of hits, including "Style" and "Blank Space," while Kloss strutted down the catwalk. The two were clearly in sync while hamming it up for the crowd and the cameras — especially when they walked together hand-in-hand, both wearing lacy black lingerie sets and bright, glowing smiles.

It's always good to see positive images of female friendship in the media, especially since the gossip columns tend to focus on cat fights between women rather than women who are lifting each other up, like what Kloss and Swift are doing. But how did the friendship between the country-turned-pop star and the All American girl-turned-Victoria's Secret Model even begin? How did Taylor Swift and Karlie Kloss meet?

In a Vogue article titled "Taylor Swift: The Single Life," Swift is quoted saying, "I love Karlie Kloss. I want to bake cookies with her!"

As you can see above, Kloss was immediately on board.

Several months later, the ladies meet in person for the first time at the 2013 Victoria's Secret Fashion Show and become official buds shortly after. Kloss tells Hollywood Take, “She is my new BFF. I’m obsessed with her. She’s really, really sweet, and I was so glad that she was a part of the show this year. She just brought such an energy."

Kloss and Swift go on an enviable amount of fabulous adventures together, including a girls-only road trip, lunch excursions in Manhattan, and the Met Gala (of course), according to Australian Vogue.

Kloss and Swift send each other supportive messages through Twitter mentions, especially once Swift's latest album, 1989, is released. They grow closer and spend more time together when they can.

The Daily Mail even claims in a now-deleted article that Kloss and Swift have moved in together. However, a representative for Kloss cleared up the rumors in a statement to Gawker: "Karlie and Taylor do not live together and have no plans to live together. The Daily Mail did not verify the facts of the story prior to publishing it."

The girls set out to London for the 2014 Victoria's Secret Fashion Show, where Swift performs again. And so the friendship comes full circle. Let's hope that the girl power friendship stays song. And let's also hope the girls got to eat some cookies once the show was done!