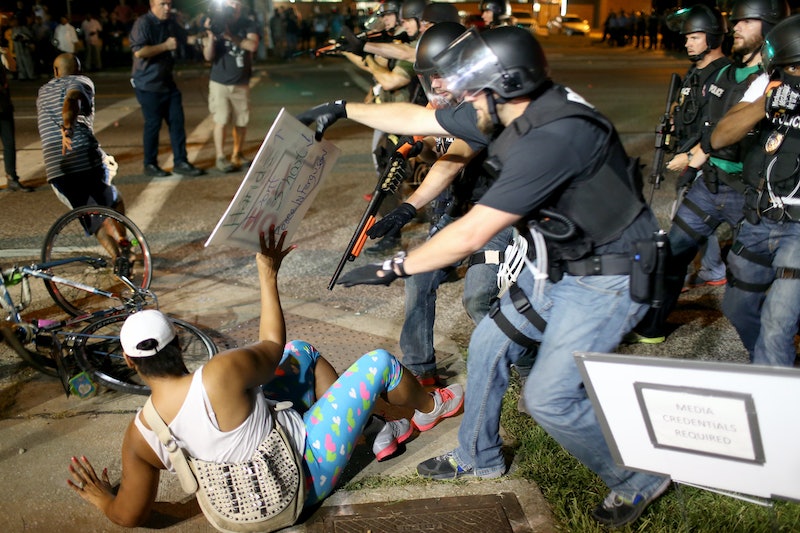 As we welcome the end of a tumultuous year in which Michael Brown, Eric Garner, and Tamir Rice have become household names, the conversation about race and police violence — two separate, but intertwined problems — is more fervent, and the need for drastic changes more urgent than before. No matter who you think is right or wrong in these incidents, there is no doubt that both issues are a real part of American society, and they have to be confronted.

That the police use excessive force in their dealings with minority communities is neither a freaky anomaly nor a novelty — I'd venture to say that it's been going on since the establishment of an official police force in the U.S. And while the world is by no means free of racial prejudices — although, hopefully, we're progressing toward that — it's important that even in the purportedly "enlightened" 21st century that we acknowledge that minorities, especially black and Hispanic communities, have vastly different experiences with the police than the rest of America.

While it might seem dumbfounding to many that the police suddenly seem so violent and brutal, the reality is that blacks and Hispanics have always known that. Darnell L. Moore, an activist, writer, and editor of The Feminist Wire, told Gawker:

What is most apparent, as you all have suggested, is the fact that the seemingly extraordinary acts of police sanctioned violence, now easily captured on smart phones, are, in fact, common. If anything, acts of state violence inflicted upon black and brown people in the U.S. are only extraordinary because they have for so long been — without any broad public outcry, without the creation and implementation of any substantial national public policy, without collective mourning and outrage — rendered acceptable and legal practices. Black and brown folk are the only bodies in this country ever accounted by the state as valueless and, therefore, appropriate for hyper criminalization and death by hands or bullet.

It's not just hearsay — statistics back up the discrimination. Nationally, the Department of Justice data showed that black people are arrested three times as much as white people. Between 2007 and 2012, white police officers used deadly force on a black person close to twice a week, a figure considered lenient because they're reported by police departments themselves. New York City's stop-and-frisk policy, now thankfully done away with, was controversial for disproportionately targeting minorities — about 85 percent of stops were made of black and Hispanic people. The NYPD was also found to have set quotas for arrests.

A Mother Jones report, laid out in charts, proved that black and Hispanics were the most frequent targets of arrests, excessive use of force, and police gunfire, among other things — all negative aspects that, to many Americans, are now synonymous with the word police. Delores Jones-Brown, a law professor and director of the Center on Race, Crime and Statistics at the John Jay College of Criminal Justice, told the magazine that the police officers involved in using excessive or deadly force typically aren't convicted or sentenced — further encouraging police officers to freely exercise brutal policing tactics. As if that's not alarming enough, these forces, already emboldened by a broken system, are unnecessarily militarized despite their lack of training for such gear.

The relentless targeting of certain communities and the lack of accountability that both the police themselves and the justice system hold to officers who misuse their authority continue to exacerbate the problem. But since Brown's fatal shooting in August, these issues have been brought to the forefront of mainstream consciousness. The outpour of emotion and calls for action both indicate that the victimized have had enough of the injustice, as well as the rude-but-necessary awareness of minorities' encounters with the police.

Despite the acquittal of Brown and Garner's killers, the public's reaction seems to signal an incredible momentum — one that could bring real change to these decades-old problems. But as these past few months have shown, it turns out that "post-racial America" really isn't post-racial at all.