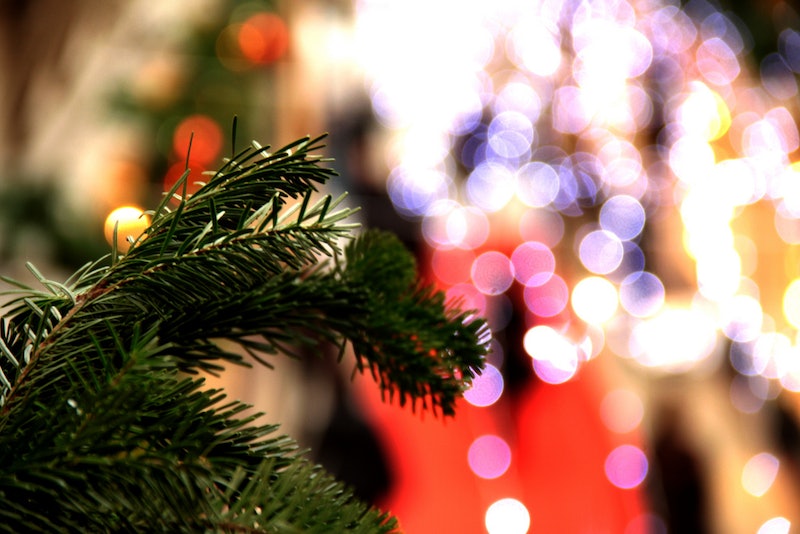 Every single December, without fail, I get to experience the same set of questions, observations, and assumptions that are all based on the age-old premise that Jewish people vehemently hate Christmas. It’s my twenty-fourth year on planet earth, and I just can’t seem to avoid these awkward "How Do Jewish People Exist During Christmas Time?!" vibes. While I’m sure some Jewish people do hate Christmas (I mean, I'm not sure why they do, but there's someone out there who hates everything, so I'm sure it happens), I can assure you that the majority of us doesn’t really care. In fact, the majority of Jewish people probably really like Christmas, because Christmas decorations are pretty and Christmas equals really good deals at the mall, and I don't think I'm shocking anyone when I say that Jews don't mind a good sale. So pretty much, we're cool with Christmas, and largely indifferent.

While I can’t speak for all Jews (I’m non-practicing and an atheist), I feel like December is beloved by everyone. It’s usually when the first snow falls, when the strip malls are bedazzled with Christmas lights and poinsettias, there is so much delicious food to be consumed, and it's when some of us have a little time off from work. December is pretty awesome, no matter what religion you practice. Just because Jews don’t believe Jesus Christ rose from the dead, doesn’t mean we don’t appreciate Christmas and the holiday season. With that in mind, here are 17 things you should probably not say to your Jewish friend, co-worker, in-law, or neighbor (because it’s getting annoying):

Mmm, nope. There is no messiah involved, nor is there a tree, nor is there much of gift-giving (except for children—I know, lame). Hanukkah is Hanukkah and Christmas is Christmas. The only reason why Hanukkah even attained winter holiday status is because a long time ago, Jewish parents noticed that their kids became butt-hurt when their Christian friends and classmates got to open presents and be merry and eat a lot of food, so we kind of reappropriated Hanukkah into what it is now. Not that it’s an insignificant holiday, it’s just that its origins are not really a lot like Christmas at all.

"OMG do you have a Hanukkah bush?"

"Well, what about New Years Eve?"

Since when did Jesus pee on NYE and claim it too? Don’t worry, we too are on the prowl for someone to make out with on New Years Eve too. Celebrated corporate sexuality is universal!

"I feel so bad that you don’t get to decorate a Christmas tree!"

I mean, I did get to decorate a Christmas tree, because it’s not like you need a Christian ID to buy a tree from the store or tree farm or wherever you goys get your gorgeous pines. But even if we don’t have a tree, I promise our tree-less soul will survive.

"But Christmas is so pretty!"

"If you celebrate Christmas, aren’t you, like, going against your religion?"

I don’t *think* there are any rules in the Torah that specifically state that thou shall not celebrate Christmas (don't quote me though), but I’m sure some Jews consider it a little weird. I celebrate both because holidays are fun and my significant other's family is Christian.

"Do you get seven presents?"

If you’re a highly-coordinated, on-top-of-it Jewish parent, sure. But most Jewish kids and adults I know just get a few at the end of the week when the family gets together because that’s a little more reasonable.

"Are you bummed out you have to work on Hanukkah?"

"If Jesus was Jewish, why don’t you celebrate his birthday?"

Because to us, Christ was just some normal dude who happened to start his own religion which happened to gain a solid following. It's kind of like that random person you went to high school with who now has their own reality show on VH1 and you're kind of like, "Eh, that's cool I guess" because it's not really your thing, but good for them, you know? Not that I'm comparing Jesus to a reality TV star. OK, maybe a little.

"Is there a Jewish Santa?"

No, there is not. We do have Jeffrey Tambor though, which is at least as good.

"What? There’s no Jewish Santa? That totally sucks, dude."

You know, it did kind of suck when we were kids. Some of us even got bullied or beat up when we tried to explain that “Santa wasn’t real” to all the wistful Christian kids, so thanks for the Santa PTSD. Thanks a lot.

"Do you get, like, offended when people say “Christmas”?"

Not any more offended than when people use the word “platypus.”

It’s okay, you eager little Politically Correctington, you can say “Christmas.” I promise we won’t sue you or suffer from irreparable psychological and emotional damage.

Ugh, dear god, no—do you?! I mean, okay, I own She & Him’s Christmas album because it’s fantastic, but how DO you guys stand Michael Bublé? Like, how did you guys make Christmas Michael Bublé a thing?

"Do you eat Chinese food on Christmas?"

Sometimes, but we also just eat other kinds of food because grocery stores are open the day before Christmas and we make sure to stock up for the Christmas apocalypse so we’re not condemned to Chinese food and movie theatre popcorn (not that Chinese food and popcorn aren't endlessly delicious).

Get out. Just get out.