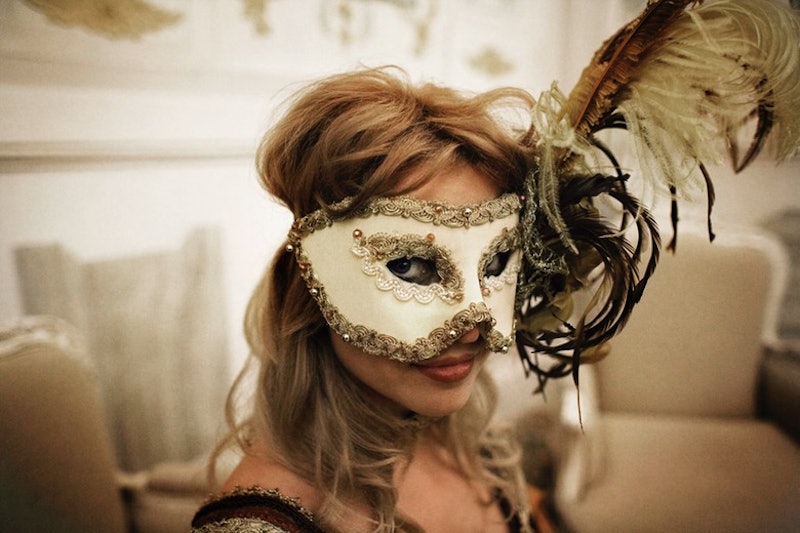 My first swingers’ sex party got off to a bad start. I was horrified when I arrived and realized that my boyfriend and I were the only ones not wearing a mask. Somehow I'd missed the memo. If I were wearing Rihanna's see-through dress, I would have felt less exposed.

But I had finally made it to this fabled event! And after months of persuasion, I had convinced my boyfriend to come with me. A friend of mine was working it and offered us free entry, an opportunity too good to pass up. Because it was “invitation only,” we had to submit photos to the host in order to attend. After that, we received an email giving us detailed instructions on how to get to the location and telling us to dress in evening wear.

And dress up we did — minus the darned masks. I was already feeling vulnerable, and being amongst a crowd of twenty or so masked strangers put me even more on edge. Thankfully, there was a bar. I downed a glass of champagne and immediately felt better, and soon forgot the mask-less situation.

Everyone was dressed well; the women in party dresses and the men in suits. We were mingling at a posh private apartment in Hollywood, looking like any normal masquerade-themed party, my boyfriend and I never leaving each other’s side.

That was, until they crowded us into the living room around a burlesque dancer seated in a chair, dressed in a bustier and fishnet tights. I was sitting on the couch right next to her, my boyfriend beside me on the couch arm. The stereo started playing a slow, sexy version of Britney Spears’s “Toxic,” and the dancer began undulating seductively and binding herself with leather cuffs.

The room was silent when she’d started dancing, and got louder and rowdier toward the end, culminating in her taking off her bustier and shaking her pasties in perfect circles. After that, people began socializing more and migrated into the bedrooms, lounging on the beds in hushed conversations.

I walked around and chatted with most of the crowd. Here, based on my experience that night, are the five types of people you can generally expect to encounter at a swingers’ party.

I talked to a couple that was obviously not there for the sex. A few minutes into our conversation, the woman handed me a business card for her photo studio after I told them I was a journalist and producer. She launched into a monologue on the popularity of boudoir photography and suggested I do a story on her and her husband’s studio. The couple left while the party was still in drinks and chatting mode, missing all of the action that came later on.

It isn’t too much of a surprise that people attend swingers’ parties simply to network. The type of people who come to an invitation-only event like this are mostly well-off, since the membership fee isn’t cheap and you generally need to know someone in the circle to get in, so they are typically professionals who could be helpful for business. Hey — nothing wrong with thinking outside the box to get away from the standard, stuffy networking event.

There were a couple of people, both guys and girls, who looked suspiciously too good-looking. These two guys in particular showed up about an hour into the party, looking like Dolce and Gabbana models in black suits. Even though they showed up together, they were definitely not gay and hung out at the fringe of the crowd, casually looking around the room and talking to people who approached them. While a woman can attend most swingers’ parties on her own, men are often required to bring a woman or otherwise not show up at all. So the fact that these two studs were allowed in on their own made their purpose pretty obvious.

Every good swingers’ party needs a few instigators, and the only way to ensure this is to hire a few pros. This does not necessarily mean they’re prostitutes — people like my friend were also paid to be there, but to maintain the ambiance and encourage people to socialize, not to f*ck them.

THE ONES WHO WERE DRAGGED THERE

Among the first people we greeted when we arrived was a young couple in their 20’s. They seemed nice and at ease together. A little while later, when I went downstairs to the bathroom, I saw them in an empty corridor, the girl in tears and the guy looking clueless and amused at the same time. “I don’t want to — ” was the last sniffle I heard from her before I turned the corner. I felt bad for the girl, who I guessed was pulled into this decadent party by her boyfriend.

Even though I’d also made my boyfriend grudgingly attend against his wish, we had a mutual pact to leave if either of us wanted to at any point. Couples that actually cry have a few issues to sort out before heading into the lions’ den.

The mood at the party heated up a couple of hours in when a handful of folks got on one of the beds and began massaging each other. They had their own little thing going — I didn’t venture close enough to participate — but I could hear snippets of their conversation, and they were talking about previous parties and the naughty things they’d done. They later partnered up and openly had sex.

These are the real experts; the people who’ve been to many a swingers’ party and know exactly what they want, how they want it, and who they want it with. A swingers’ club relies primarily on yearly membership fees, so these guys are the life and blood of the party, so to speak.

In the end, I was satisfied with my first taste of a sex party, even though I didn’t physically partake. I saw that it was about more than just a bunch of people looking to get laid: it was about offering a safe environment to satisfy your curiosity and desires, without fear of judgment. We all have some sexy thoughts in the back of our minds, and this seemed like the perfect place to see them play out — and even make them a reality.

More like this
The Best Time To Date After A Breakup, According To Experts
By Bustle Editors
Virgo & Sagittarius Zodiac Compatibility, According To Astrologers
By Kristine Fellizar
How Do I Deal With Both ED & Premature Ejaculation?
By Sophia Benoit
7 Women Share Their Best Orgasm Stories
By Lexi Inks
Get Even More From Bustle — Sign Up For The Newsletter