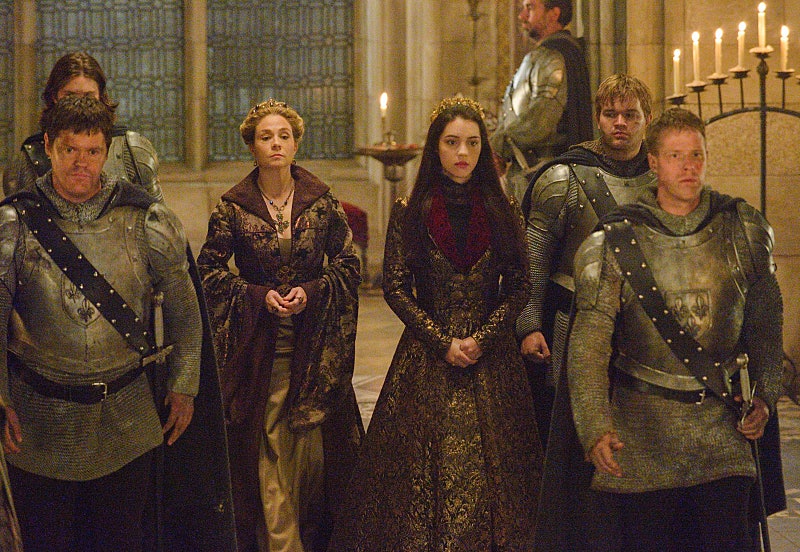 Before Reign took its Thanksgiving hiatus, I wrote that it had lost its spark and needed to get back to its roots after a lackluster half a season. I wrote that it was being too serious in ways that weren't authentic to the show (most of the season has been about famine and religious unrest). Tonight, Reign got much more serious than it's probably ever been and I have to say, I'm not complaining. In tonight's episode, "Acts of War," Reign tackled rape and how victims react to it and it was maybe one of the most poignant portrayals of sexual assault I've ever seen on television.

The rape on Reign fits, story wise, and it fits with the serious tone of the season. Religious differences are reaching a boiling point between Catholics and Protestants and, even though Mary and Francis have been trying their best to promote peace, things are only getting worse. In the final few minutes of the show, violent Protestants storm the castle in search of Mary and Francis, who the hope to assassinate. Francis is gone, off advocating for peace in the nation, but Mary is home. The attackers find her in her room and attempt to kill her, but not before one of them brutally rapes her. It's network TV, so it's not directly shown, but you're not fuzzy for a moment about what's happening to Mary. Summoning strength few would possess, she manages to fight off her attacker and escape.

This is where I really want to praise Reign and its writing staff. Queen Catherine finds Mary after the attack and being a survivor of sexual assault herself (and just, you know, a human being — because it's obvious that Mary isn't okay and not hard to guess why), she immediately knows what's wrong. She addresses Mary clearly, straight-forwardly, frankly and, all the while still compassionately, and asks if she was raped. Mary's response is shock. The assault happened only moments prior and she's being asked to recall it and process it, which can be nearly impossible during times of trauma.

Now, while Catherine's advice to Mary is far from ideal for a contemporary, non-fictional woman, it fits for the show and the character is as supportive and accepting as she could possibly be in the circumstances. She counsels Mary to hide the rape, urging her to clean herself up, put on a strong face and publicly deny that the Protestants ever even made it to her room. Catherine isn't being cruel or undermining the severity or gravity of what happened to Mary when she advises this. She's looking out for Mary as a ruler and her advice can't be removed from the context (the time period, Mary's position of power and France's precarious position as the war between the Catholics and Protestants brews). But even as she urges Mary to pretend she wasn't raped publicly, she is outrageously, uncharacteristically supportive and wonderful to Mary on a personal level. It's the ultimate show of woman on woman kindness and compassion in Reign's two year history, without a doubt.

And later, when Francis returns and comes to check on Mary after hearing the news of the attack on the castle, she continues to be a rock star. She doesn't allow for even the possibility of victim blaming. She advises Francis on how to approach Mary ("Just give her time and space and all you need to do is listen") and she offers to stay if Mary needs her to or leave if Mary needs her to. Her number one, tunnel-visioned concern is Mary's mental and emotional well-being after her traumatic and devastating attack.

I usually like to poke fun in my Reign recaps, to focus on the light-hearted moments and keep things light, but there just isn't room for that this week. Reign took on a very tough subject and did so with a great deal of respect for the character who suffered as a result. Bravo, Reign.