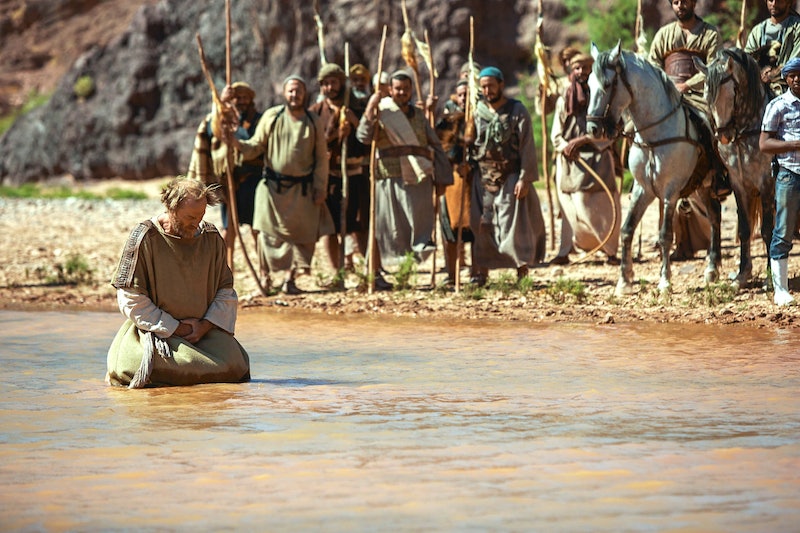 For the first time in a long time, I've actually enjoyed watching something on Lifetime. The channel that often scares me with stories of children getting lost in the dangerous worlds of drugs, sex, and more, or provides unauthorized biopics of some of our favorite stars, is coming out with a new miniseries that is actually pretty interesting. Lifetime's newest project is The Red Tent , a two-night adaptation of the best-selling novel of the same name by author Anita Diamant, and it follows the untold story of Jacob's only daughter Dinah. Her story originally comes from the book of Genesis in Bible, but The Red Tent greatly changes and expands on the few passages Dinah originally received. The miniseries is quite interesting to watch, but it has one big problem: some details and character development have been lost from page to screen. For example, why did Jacob's sons kill Dinah's husband when the two were in love and married?

The Bible's original passage about Dinah justifies their revenge, and though Diamant's novel changes the story, an explanation is given. But the miniseries loses points for not taking the time to develop its many characters enough to provide more of a justification for their actions.

In The Bible, when Dinah met her eventual husband Prince Shechem, he raped her, then fell in love with her and asked her father for her hand in marriage. Her brothers were so overcome with anger toward the treatment of their sister from him that they felt a bloody revenge was the only repayment. Jacob and his sons at first asked Shechem and his men to get circumcised as Dinah's bride-price, rather than gold and jewels and anything else Shechem would have been able to provide. Shechem agreed and while they were recuperating, two of Dinah's brothers Simeon and Levi stormed the gates and killed every last man under Shechem's command as revenge for the rape of their sister.

In the book, however, Dinah and Shechem fall for each other and Dinah makes the choice to be with him as his wife. She makes the choice for Shechem to take her virginity and she stands up to her family in defense of that love. Yet somehow, all of her brothers except Joseph are still humiliated and angered by the Prince and his father's treatment and seek revenge. But why was such humiliation felt? At the end of the miniseries' first half, we know very little about Dinah's brothers except Joseph, the same Joseph with the technicolor dreamcoat who later gets sold into slavery by the same brothers, but then ends up becoming the Vizier in Thebes. Jacob's other sons aren't given enough individual attention in the film to understand their motives.

Other than giving us depth into female characters like Dinah's mother Leah and her aunt Rachel when they were younger, and giving us information about Joseph and Jacob, there are just too many characters that are introduced who get no screen time, thus their actions are hard to understand in the adaptation.

I just want to see what made Dinah's brothers so sensitive to humiliation, which is how they feel when Shechem marries Dinah without asking for their father's permission. We do get some understanding of Levi and Simeon when the brothers hear their father talk about Joseph as the golden child and have extremely negative reactions. But we still need a few more scenes that give a look into their psyche before their brutal attack, because let's be honest, the brothers' revenge paves the way for the rest of Dinah's incredible journey.