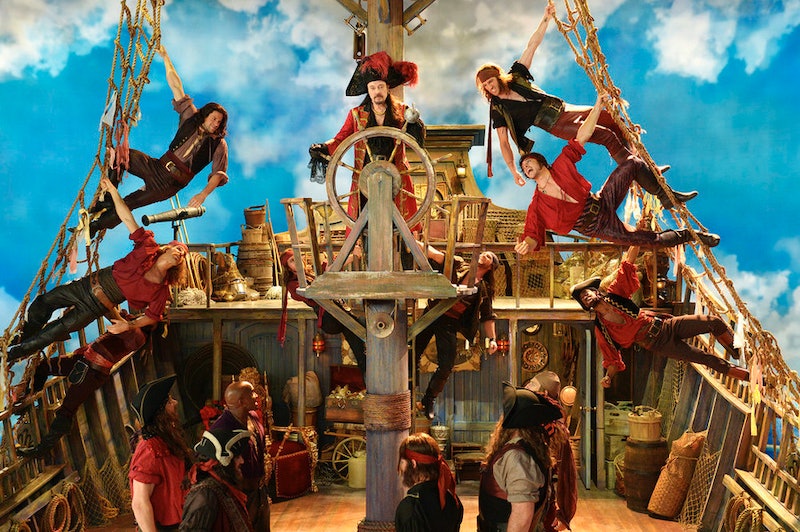 It sang, it danced, it conquered — NBC's Peter Pan Live! on Thursday night enchanted, bewildered, and made me want to fly to Neverland (just a little bit). Actress Allison Williams spoke and sang like a lanky flying Brit as Peter Pan, while Christopher Walken perfectly portrayed Christopher-Walken-as-Captain-Hook wearing the most righteous sequined hat and eyeliner ever. This year's musical extravaganza invoked lots of jokes including Williams' Girls character Marnie and Christopher Walken's past Saturday Night Live sketches (Neverland really might need more cowbell, though), but hey, the musical itself had fun moments of its own. Let's take a moment to appreciate all the awesomeness and awkwardness Peter Pan Live! had to offer — in GIFs.

Of course, everything is 10 times better in GIF format — even Peter Pan Live!, whether you were hate-watching it or just plain watching it. Like that time Tinker Bell flew around looking like someone's cell phone flashlight was on — better as a GIF. Or how about when Peter and Captain Walken were having the least intense sword fight of all time? Oh yeah, these GIFs may fly higher than the NBC live original. Know what the best part is? With GIFs, the fun never ends. It's like the internet's version of Neverland.

So, Peter Pan is Just Like, "Hey, Let Me Fly into This Window"

Where there are kids sleeping. Not creepy at all.

And Tells Wendy All About His Shadow. Both of Them.

Then He Does a Chicken Dance.

The Bluths and their chicken dances would be proud — even if he's actually doing a crow impression.

Because that's what pirates do. Duh.

Then Peter Takes The Kids to Neverland Where Things Get a Little Weird...

Best, weirdest crocodile ever. Hands down.

You be you, Hook.

Kidnapping — just another night in Neverland.

Mostly to let us know that Peter Pan is the sun and the moon and the stars and she's totally his khaleesi (whoops, wrong show).

And Then Tinker Bell is Poisoned!

How dare anyone try to kill a cute CGI sparkle! But NBC totally knew how we could save her: BY TWEETING. Because it's 2014, y'all. #SaveTinkerBell

Hook is So Mad Attacks a Tamborine

It's his ship. He does what he wants!

In the least intense sword fight of all time. But hey, he won! Neverland is safe again.

Everyone sings and dances some more to celebrate

Because musicals. The end.