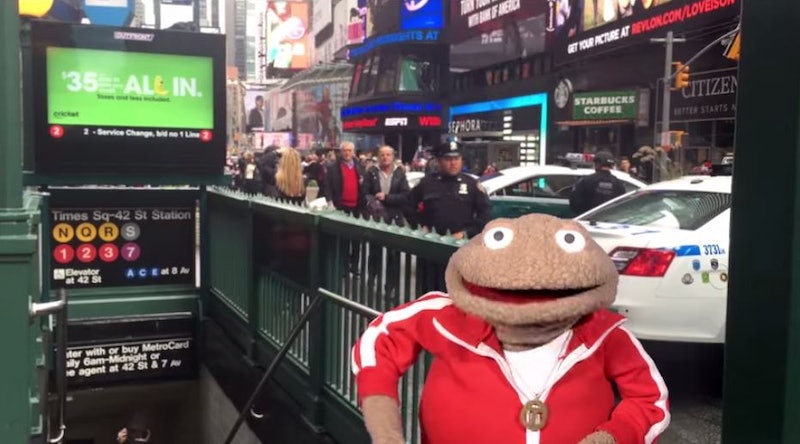 If you live in a city (or even if you just visit cities on occasion), odds are that public transportation is going to be a way of life for you. This is especially true in New York — and even if you’ve lived there for a while, it can’t hurt to brush up on your subway etiquette. Luckily, though, we’ve got a fun way to do it: With puppets, courtesy of the web series “Glove and Boots.” Brace yourselves for Johnny T’s best subway tips.

“Glove and Boots” is kind of like the middle ground between the Muppets and the late '90s MTV show Sifl and Olly (am I dating myself with that reference? I am, aren’t I? Ah, well; time happens to the best of us): It’s a little less kid-friendly than the Muppets — but not quite as weird as Sifl and Olly. Anyway, Johnny T is “Glove and Boots’” resident “Italian stallion”; he’s even got the phrased emblazoned on the back of his shiny red track jacket. He’s a little abrasive and occasionally makes inappropriate comments — but he also has a lot of good points. As Johnny T puts it, “Think of the subway as going to a party at a stranger’s studio apartment…at seven in the morning with 800 other people who all hate each other.” Fun, right?...in that incredibly not fun kind of way.

So here’s how to make the best of your time spent hurtling through a concrete tunnel in a little metal box while surrounded by complete strangers. Scroll down to watch the whole video:

1. Let People Off Before Boarding

Johnny T even came up with a delightful short poem to help you remember to let the people who want to get off debark before trying to cram yourself on. Not only is it polite, but it’ll also, y’know, make sure that there’s room for you to get on the train in the first place.

2. Don’t Put Your Bag on the Seat Next to You

3. Don’t Take Up More than One Seat If You Don’t Have a Bag, Either

One of my least pleasant subway-riding experiences involved a woman literally shoving me out of the way as I sat down next to her, purely so she could proceed to spread herself out across both seats. She looked so terribly pleased with herself for doing it, too. I, on the other hand, ended up with a bruise on my hip after ricocheting off of the subway pole she slammed me into. Don’t be that woman.

I’m going to respectfully disagree with Johnny T here; I don’t think you need to absolutely refrain from eating on the subway at all times. At my busiest during my city duies, often the only time I actually had a chance to eat was during the 30-minute subway ride between classes, rehearsals, or jobs. If you are going to eat, though, make sure it’s not smelly, and clean up after yourself. Don’t just toss your empty food container on the floor and leave it there.

While we’re on the subject of smelly food, let’s just come to terms with the fact that the subway stinks. We can’t change that fact — but as Johnny T says, we can make sure we don’t add to the stink. Exercise good personal hygiene, because nothing’s worse than being jammed up next to 80 people who haven’t showered or brushed their teeth for three days.

6. Remember: The Subway Is Not Your Home

You can be as disgusting as you want between the walls of your own home, but as soon as you set foot outside, behave like you’re a guest in someone else’s home — even when you’re on the subway.

Watch the full video below, and check out more of “Glove and Boots” over at the web series’ YouTube channel. Need more pointers not just about riding the subway, but surviving New York in general? Artist Nathan Pyle has you covered with his indispensable series of animated GIFs. Good luck, everyone!