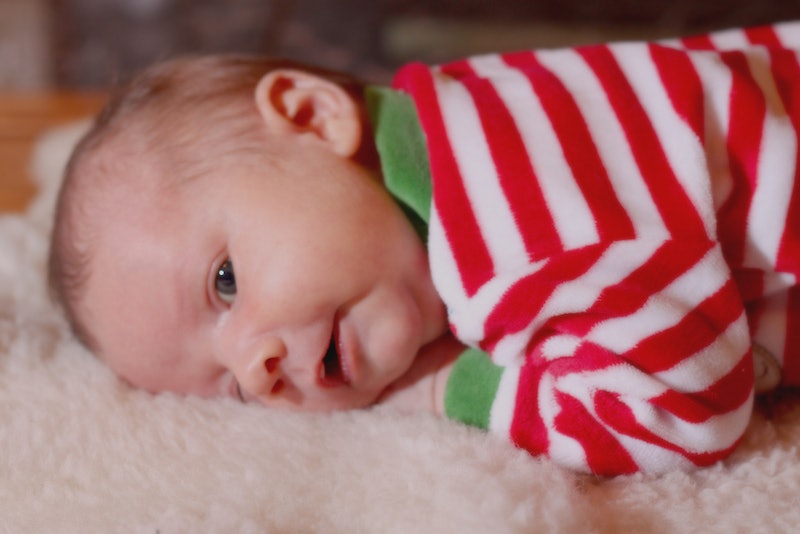 I’m all for unique baby names…but sometimes I wonder if parents just don’t stop to think about the effect incredibly unusual names will have on their children’s lives. Such is the case in many of 2014’s most unusual baby names as determined by Baby Center. Sure, there are some that probably won’t be so bad; Hyacinth and Portia sound delightfully old-fashioned for girls, and boys named Finnick, Bender, and Castle have pretty awesome fictional counterparts. But girls named Yolo? Boys named Guru? They’re almost certainly in for a bad time when they get older. I’m also 99.9 percent sure that Simba’s parents named him such specifically so that they could accurately re-create the end of “The Circle of Life” at the moment of his birth.

As ABC7 in Chicago pointed out, though, rather a lot of them seem to be based off of their parents’ favorite things — and I’m not talking virtues like hope or charity. I mean actual, physical items manufactured by large corporations. In the interest of seeing if maybe the parents chose these names based on what they mean, rather than what they sell, let’s take a look at the etymology of nine of them — five for the girls, and four for the boys — shall we?

Head on over to Baby Center to check out the full list.

Audi’s parents sure do love their car, don’t they? Although to be fair, the automotive company’s name does have an interesting story behind it: The company founder’s name was August Horch; the word horch means “I listen” in German; and in Latin, “I listen” becomes “audi.”

Although Hennessy is an Irish name, the cognac company bearing the title is based in France. Here’s why: It was begun by an Irishman, Richard Hennessy, who was serving in Louis XV’s army in 1765. The name itself is the Anglicized version of Ó hAonghusa, which translates to “descendent of Angus.”

A variant of Neva and Neve, Nivea comes from the Latin word for “snow” (“niveus”). It’s also the name of a skincare company. They make great lip balms. Seriously, you guys — A Kiss of Berry Swirl is my winter jam.

Like Hennessy, the Rolls-Royce car company gets its name from its founders: Charles Stewart Rolls and Frederick Henry Royce. The name Royce itself means “of a famous kin”; interestingly, though, it’s derived from a medieval woman’s name, Rohese. Not so weird for a baby girl, right?

As is the likely the case with Nivea, Sephora’s mum and dad probably really dig makeup and beauty products. The story behind the word itself, however, is a little more convoluted than you might guess: Apparently (and I say apparently because I’ve never seen it myself — others have, though, and they’re generally sources I trust), the beauty retailer used to explain on their “About” page that “Sephora” originates from sephos, the ancient Greek word for beauty. But as beauty blog the Brightest Bulb in the Box pointed out, sephos was not the ancient Greek word for beauty — it was kallos. It's also worth noting that the whole "Greek beauty" explanation has since mysteriously vanished from Sephora's website. However, it is possible that the name comes from Zipporah, Moses’ wife in the Book of Exodus — she’s described as being exceptionally beautiful, and in 1956 film The Ten Commandments, her name got changed to Sephora. For the curious, the Hebrew name Zipporah means “bird.”

What if Dior grows up to loathe couture? What then? Will he change his name on his own? We’ll just have to wait and see. At least the name isn’t a possibly nonsensical word like Sephora; it’s a French name meaning “present.”

I suppose it’s possible Dodge was named after the Artful Dodger or something, rather than the truck maker, but I wouldn’t count on it. In any event, we’re not totally sure about the origin and evolution of the word dodge itself; according to the Online Etymology Dictionary, it might be akin to the Scottish word dodd, which means “to jog.” In addition to meaning “to move to and fro,” it was also a slang term in the 1840s for “person’s way of making a living.” It was also used in the 18th century to mean “to swindle, to play shifting tricks.”

As a surname, its origins are Anglo-Saxon; it comes from the baptismal name Dod, itself a shortened version of Roger.

Hershey is probably going to get sick of people asking him whether his favorite food is chocolate. Just sayin’. The Hershey Company’s founder, Milton S. Hershey, grew up in Pennsylvania (which is still the company’s main base today); his ancestors, however, were Swiss and German. Makes sense; Hershey is derived from Hersh, which means “deer” in Yiddish.

In addition to being the name of one of the biggest hospitality companies in the world, Hilton is Anglo-Saxon in origin. It’s a topographic surname, meaning it was derived from a place name; in this case, it was a parish in Derby, Dorset, Durham, Staffordshire, and North Riding in the U.K. People with the name “Hilton” lived in the “hill-town.” Get it?

As a side note, let’s hope Baby Boy Hilton doesn’t marry anyone from the hotel chain family when he grows up. “Hilton Hilton” is a name I wouldn’t wish on anyone.

So there you have it: A generation of children named after material goods and huge corporations. Does it bode well or ill for them? How about for us as a society? Only time will tell — but if you’re planning on having a baby soon, I beg you: Think before you name.