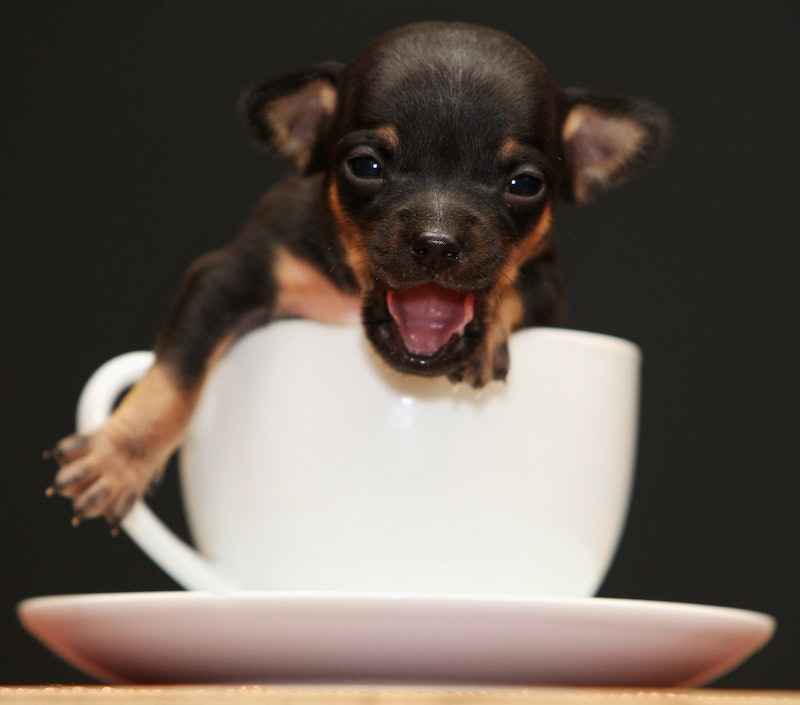 From the experience I have in all my 20-something years of living, I know for a fact that puppies are never a bad idea (watching videos of them, not having them, let me be clear; Having a puppy, like having a baby, when you're unprepared, is the worst idea). Like babies, cake, and school getting cancelled on snow days, puppies are a phenomenon that you just can't help but doofily grin over and get embarrassingly excited about. I think the only thing on this planet that might be better than a puppy is watching somebody get surprised by a puppy, which I'm guessing is going to be happening a lot more now that holiday shenanigans are officially underway.

My Christmas wish is that everybody gets surprised with a puppy sometime in their lives, because puppies can cure almost whatever ails you. I can't try to explain the science of puppies because there are some things in this world so cute that they are beyond my understanding, but actual scientists have researched ways that puppies can relieve cancer symptoms and even help ease chronic anxiety. That's more than worth a few accidents on the rug and a few gnarled up pairs of Ugg boots, if you ask me. So close your eyes real right and make a wish that this year, you get just as surprised by a puppy as all of these overwhelmed humans did:

A man PROPOSED WITH A PUPPY, and because he possibly is on a mission to collect the tears of everyone in human existence, he recorded the whole thing from multiple angles. This is how you turn a "yes" into a "YES, PLEASE."

This video has everything you could ever dream of: Valentine's day, adorable children, choreographed video game dancing, and, of course, a surprise Yorkie puppy. There isn't any sound on the video because of a copyright issue with the song they were dancing to, but the tears speak for themselves.

You know what, no, I'm not going to tell you what happens in this video, because you should also be so surprised by it that you go "OH MY GOD" in a public place full of strangers. HAPPY HOLIDAYS, SUCKERS.

This girl was so stunned by her new puppy that she was All Of Us when she said "That's not even real" so many times that it wasn't even real. Also, if you didn't know how cute a French bulldog puppy could be, you know now.

Although the family reassured everyone that the present this adorable surprise pitbull puppy came in was properly oxygenated and that the puppy only went in at the last second, you WILL hold your breath the whole time hoping he doesn't flip the box over. (To spare you our anxiety: the puppy is more than fine).

These parents deserve a medal for lying to their children. Nay, an Academy Award. They managed to convince their children there was a raccoon stuck in the chimney, and the teamwork involved in rescuing it is almost as adorable as the SECRET PUPPY they find instead.

I am warning you right now because I am a good person that you need to turn the sound down on this before you watch it. But if you don't heed my warning and end up blowing out your eardrums, I think we can all agree it was worth watching the first few seconds of a beautiful puppy-teenage girl relationship.

This woman's reaction to her surprise Sheltie puppy is beyond precious, once you're sure that she's ACTUALLY BREATHING.

9. The "I'm Just As Surprised As You Are" Puppy

First, let me say that any kids who are doing homework this dutifully clearly deserved a dog, but the most endearing part of the video is when the puppy nudges its little head out of the box and looks just as genuinely confused about its presence there as the kids do.

Anytime you see a video where someone says the words, "We've just got ooooone more present," you pretty much know a Surprise Puppy is about to happen, but you still cry like a baby because nobody can ever prepare for these feels.

I don't think anyone cried this hard after being surprised with a puppy, except maybe everyone who watched her get surprised with this puppy (sorry not sorry).

Literally the only thing that is ever socially acceptable to wake someone up in the middle of the night for is a new puppy, as evidenced by this video.

Yes, the surprise is heartwarming, but nothing on this planet is quite as shockingly adorable as the way this puppy snuffles. I have never seen a puppy snuffle like this in my entire life. Please, for your sake and the sake of all humans everywhere, behold the almighty snuffle of this pup.

14. The Glorious Chorus Of Squeals Puppy

Judging by the reaction of these three sisters, this is one chocolate lab puppy who will never be in need of extra love.

This puppy was a surprise for their mom, and the way that she and the puppy instantly snuggle and bond will probably emotionally wreck you for the rest of the day.

Judging by the fact that this adorable woman was reduced to tears at the mere picture of this puppy before she even knew that the physical puppy was in the house, you can pretty much guess that her reaction to the real thing was priceless.

17. The "You Can Never Have Too Many Christmas Puppies" Puppy

Dad's confusion in this video is half of the fun.

18. Apocalyptic Montage Of More Surprise Puppies Than You Can Possibly Handle

Just in case you are not too weak from your happy tears to click the play button on this video montage of surprise puppies, HERE YOU GO, friends.