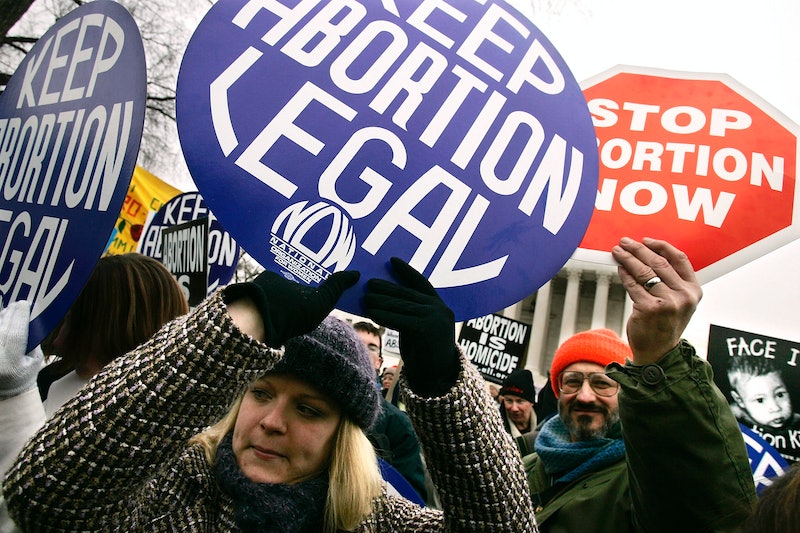 In El Salvador, the country's Supreme Court forbid a 22-year-old woman suffering from lupus and kidney failure, and pregnant with a severely malformed fetus, from undergoing an abortion. In Ireland, the state denied an abortion to a pregnant woman who was raped and suicidal. And in the United States, a woman was imprisoned in September for providing her daughter with the abortion pill — medicine she ordered online because her daughter didn't have health insurance, and the family could not afford to travel nearly 100 miles to the nearest clinic.

These are just some of the stories you'll hear about women across the globe lacking access to abortion care. Although it's been debated in the past whether reproductive rights are human rights — evident in perhaps the most famous recent case of the European Court of Human Rights versus Ireland's draconian anti-abortion law, which ended up being a blow to abortion rights activists — international organizations have been taking a fresh look at the impact of anti-women's health laws in various parts of the world. And in a newly released report from United Nations Secretary General Ban Ki-moon, the conclusion is clear: reproductive rights are crucial to achieving gender equality worldwide.

Published as a sort of precursor to the 2015 U.N. General Assembly, "The Road to Dignity by 2030: Ending Poverty, Transforming All Lives and Protecting the Planet" outlines the ways in which U.N. member states can build toward "sustainable development" to better the lives of their citizens. "Next year, 2015, will herald an unprecedented opportunity to take far-reaching, long-overdue global action to secure our future well-being," Ban said in a statement on Thursday.

In the report, Ban underscores the importance of gender equality, reaffirming women's rights as integral to development:

We must ensure women, youth and children have access to the full range of health services. We must ensure zero tolerance of violence against or exploitation of women and girls. Women and girls must have equal access to financial services, and the right to own land and other assets. All children and adolescents have a right to education and must have a safe environment in which to learn. Human development is also the respect of human rights.

To uphold the rights of women and achieve gender equality worldwide, Ban states U.N. members must "realize women’s reproductive health and rights," advocate for universal healthcare coverage for all, and "end preventable maternal, new-born and child deaths and malnutrition."

Lilian Sepúlveda, vice president of the Global Legal Program of the Center for Reproductive Rights, praised Ban's report, saying on Friday that it confirms that women "must hold ultimate authority over the full range of decisions she faces about her health and her family." However, Sepúlveda believes the U.N. still has some more work to do, including urging U.N. member countries to eliminate discriminatory laws that limit women's rights:

We commend Secretary-General Ban Ki-moon for recognizing that human rights, and accountability for fulfilling them, are essential parts of development. But U.N. member states must place greater emphasis on ensuring that women’s reproductive rights and gender equality are top priorities in the final sustainable development goals.

Still, this latest U.N. report reaffirms the organization's support of defending reproductive rights, building upon the strong work the U.N. has already done in 2014. In July, the U.N. called on Chile, which prohibits abortion in every instance, to loosen its abortion laws. A U.N. report released at the time said the country "should make sure that reproductive health services are accessible to all women and adolescents."

That same month, the U.N. released a scathing report on Ireland's "highly restrictive" abortion laws, claiming they violated women's rights. The U.N. urged Ireland to revise its legislation to ensure women whose lives are at risk can receive abortions, and that doctors won't be criminalized for providing the procedure.

And in November, United Nations Committee Against Torture met in Geneva to discuss the violation of human rights in the United States. Among the cases raised were discriminatory laws blocking reproductive health services to immigrant women held in U.S. detention centers, or low-income women of color living in rural areas were abortion access has been severely impacted.

"No woman in the U.S. should be denied essential reproductive health care and endure ill-treatment because of her gender, ethnicity, immigration status, or disability," Katrina Anderson, Senior Human Rights Counsel at the Center for Reproductive Rights, said in November.