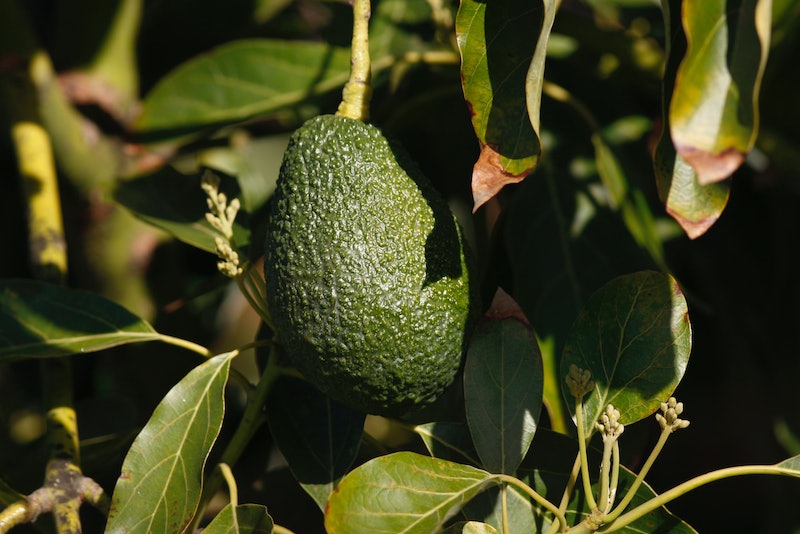 The avo-pocalypse is near, and that sound you're hearing is the collective cry of guacamole and avocado toast lovers everywhere. According to recent reports from National Geographic, we are fast approaching an avocado shortage as our demand outstrips the supply of everyone's favorite green fruit. And thanks to the drought that has plagued many parts of California this year, Mother Nature may finally be hitting us where it hurts — in our stomachs. So buckle down, friends, and prepare yourself for the unthinkable — a world where avocados are no longer readily available.

While there have been avocado scares throughout the year, with initial reports in March suggesting that guacamole may be a fast-disappearing condiment, the latest evidence presented by National Geographic paints a dire picture for the future of the fruit. California's $435 million avocado industry supplies the United States with 95 percent of domestic production, but with much of the state in desperate need of water, this number may plummet without rain's relief. Avocados are particularly susceptible to the effects of a drought, as it typically takes a whopping 74.1 gallons of water to grow a single pound of the fruit. For comparison, it takes 42.1 gallons of water to grow a pound of peaches, 12.2 gallons to grow a pound of oranges, and just 5.5 gallons to grow a pound of lettuce.

But worse yet, the vast majority, 70 percent to be exact, of our avocados don't even come from within the United States — instead, we turn to countries like Chile to supply our addiction, which is perhaps an even more unsustainable practice. Much like California, the region of Chile that grows the fruit is suffering from a severe lack of rainfall, and the crop requires even more water in South America than it does in the United States. In fact, to grow a pound of avocados in Chile requires 96.8 gallons of water. And in desperate attempts to meet Americans' growing obsession with the fruit, Chilean farmers have literally run their wells dry in order to irrigate their fields. In fact, as Eilis O'Neill wrote in Civil Eats, avocados have "used so much of the region's waters that small farmers with shallow wells—and some nearby towns—are left with no water," leaving some of the "most humble communities" thirsty.

But beyond the water shortage, there is another, even more dangerous threat to avocados — cartels. In many parts of avocado-producing Latin America, like Mexico and Chile, the fruit is known as oro verde, or green gold. Between 2012 and 2013, avocados were the single most profitable cash crop from Mexico, bringing in more revenue than marijuana with $1 billion. And much in the same way that the profitability of the drug industry attracted the attention of dangerous cartels and gangs, the avocado industry in Mexico is now largely run by a group known as the Caballeros Templarios, the Knights Templar, described by the Latino Post as a "bloody, violent, meth-trafficking cult cartel." But now, with avocados proving more profitable than meth and marijuana, the Knights Templar have turned their attention to the fruit industry, and according to a report from Vocativ, "controls the local trade, from production to distribution."

Their tactics are ruthless and horrifically effective. In the Michoacán state of Mexico, the chief producer of avocados and the capital of the Templarios' influence, it is estimated that some 100,000 individuals are affiliated with the dangerous cartel. By acquiring detailed information about every single avocado farmer in the region, the Templarios have managed to keep tabs on exactly how much land and the crop size of each producer. This information is then used to extort farmers, and if anyone dares cross the cartel, there are consequences. One producer, who chose to remain anonymous to protect himself, told Vocativ, "It’s no use trying to convince them to demand less. They know exactly how much you own. If you lie to them, they’ll kill you or one of your family members."

According to another farmer, a 50-year-old named Jesús, the Templarios have effectively ruined the entire avocado trade in the region. Whereas his family once turned a healthy profit of $1.5 million a year on a good harvest, Jesús now struggles to feed his family on an annual salary of $15,000. "The Templarios have ruined my business,” he told Vocativ. “I don’t know how much longer I have until I go bankrupt."

Much in the same way that the quinoa craze all but destroyed the South American quinoa industry by spiking demand to an unreachable level, leaving indigenous farmers who'd survived on the staple grain for centuries suddenly without their primary source of nutrition, the avocado craze seems headed along the same worrisome path. The avocado itself is a freak of nature — the fruit should've gone extinct long ago when gomphotheres, the giant prehistoric elephant and the chief consumer of the fruit, died out. With the large size of the avocado's pit, the gomphothere was the only animal capable of consuming the fruit and then spreading its seeds. But when the animal disappeared, somehow, the avocado stuck around, and has now found a new, voracious consumer in the Chipotle customer.

But it may be time for our love affair with the avocado to come to a close, or at least for us to consider a more responsible consumption method.