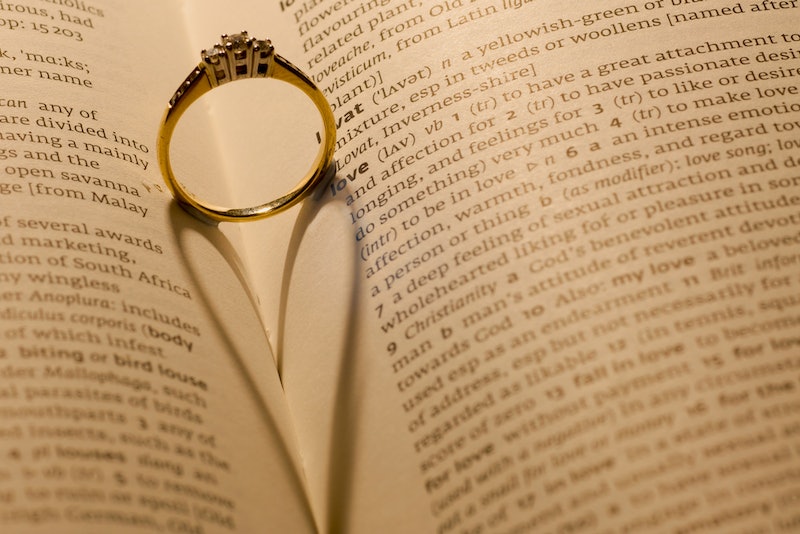 The Global Language Monitor's Annual Survey of Global English recently revealed the official word for 2014, and it's not even a word at all. According to the survey, the heart emoji is the Top Word for 2014, beating out the entire canon of the English language, including Ebola and the Pope. While it's slightly concerning that our top word is in fact a symbol, the fact that an emoji is the winner points to an even larger commentary on our society as a whole, and the way in which we chose to express ourselves in the modern era.

Like language itself, the language of dating is in constant flux, and continues to reflect both our use of technology and our cultural fear of commitment. In this day and age, we would rather send a symbol of a heart via text message and let the recipient interpret its meaning than clearly articulate our feelings in person. Of course, this is largely the result of the paradigm shift toward online dating that now characterizes our culture, where it's argued that around one third of U.S. marriages start online. As such, today's modern "dating dictionary" must reflect the fast-paced, tech-driven language that we now use to communicate romance.

Mic recently created their own "dating dictionary" to try and define our generation's love language using words such as "thirst follow" and "defensive dating." I thought their choices reflected larger themes in our dating culture, and I added a few more to the modern dating lexicon. As a result, here are a some of the defining words that represent what dating sounded like this year (courtesy of both Mic and myself), as well as what they really mean for the zeitgeist as a whole:

Definition: Define The (Romantic) Relationship. Conversation usually begins with, "Sooo, what are we...?"

Sentence: "Have you DTR'ed yet?"

What it really means: We're terrified of commitment! There would be absolutely no need to define our romantic relationships if not for our aversion to labels and our love for ambiguity. The concept of DTR'ing reflects a larger issue of trying to perpetuate a romantic connection without any of the obligations of commitment.

Definition: A romantic interest, your main guy/girl. Can refer to a boyfriend, girlfriend, casual hookup, etc.

Sentence: "Is that her boo thing sitting next to her?"

What it really means: Perhaps this word isn't used as frequently as the others listed, but "boo thing" has come to be one of my absolute favorite terms. For me, it encompasses that gray area between full-fledged relationship and one-night stand that is all too often impossible to define. That way, when people ask me about the relationship between my friend and the guy she's constantly hooking up with, but not dating, I can say, "Oh, he's her boo thing," and leave it at that.

Definition: According to the online slang dictionary, "a [person] with whom one has sex without any emotional attachment or commitment. Also known as 'friends with benefits.'"

Sentence: "They're not dating, they're just fuck buddies."

What it really means: This isn't just a term, it's a phenomenon. Fuck buddies more often than not represent the very problematic nature of hookup culture, in which sexual partners view one another through an emotionless lens. Still, fuck buddies can be empowering if both parties are on the same page and aware that their connection is strictly platonic.

Definition: Down To Fuck. A.K.A. willing to have sex.

What it really means: Again, this term represents a pervasive desire to eliminate commitment and transition straight away to a purely sexual connection. Sorry if this is news to anyone, but in no circumstance does a guy wonder if a girl is DTF, and then hope she is also open to a loving, monogamous relationship post-coitus.

Definition: Mic provides us with a satisfying definition: "Individuals — usually men — who use their online connections with women as an opportunity to troll, berate, objectify, harass and lash out at their targets in a unsolicited, inappropriate manner."

Sentence: "Some Tinder creep keeps asking me if I'll send him nudes."

What it really means: It might be obvious, but this term proves that many online daters aren't looking to develop a serious love connection. Even though one third of U.S. marriages may start online, there are a sufficient number of Tinder creepers out there that make you want to quit the process of online dating altogether. This also points to a greater issue with how men behave online, using it as an opportunity to objectify, and even degrade, women.

Definition: Ceasing contact with a romantic interest without explanation. Fading out.

Sentence: "If you haven't heard from him in over a week, he's probably ghosting you."

What it really means: In this day and age, people feel licensed to cut off romantic contact with someone at any point, without a word. Thanks to technological advances, we're no longer comfortable using our words to articulate how we feel, and so we'd rather shut someone out without explanation than be honest and real.

Definition: Dodging someone in whom you are not interested. Made popular by the Kanye West song "Mercy."

Sentence: "Ew, he asked you to grind up on him? Swerve."

What it really means: I am obsessed with this term, because it says so much by saying so little. "Swerve" allows you to express your disinterest in a guy while issuing a command (either to yourself or someone else) to GET AWAY FROM HIM. On a macro level, though, swerve is again reflective of the popularity of hip hop culture in the media.