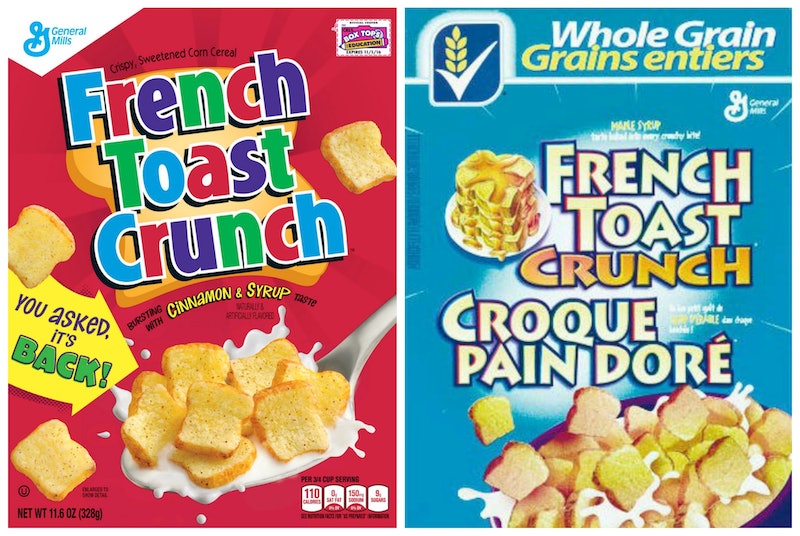 If you into paroxysms of glee when you heard that Surge and Crispy M&Ms were returning, prepare yourself — this latest tidbit might actually make your little ‘90s-loving head explode: French Toast Crunch is coming back. So, y’know, just in case you’ve ever dreamed of garnishing a bowl of your favorite ‘90s cereal with your favorite ‘90s candy and smothering it not with milk, but with your favorite ‘90s soda… well, let’s just say that sometimes, dreams really do come true.

Although its following hasn’t been quite as fervent as Surge’s, occasional calls for French Toast Crunch’s return have echoed across the Internet at various points throughout the years: Change.org petitions, Facebook groups, and more rallied to the cause of the beloved breakfast cereal, which went into production in 1995 and exited shelves in 2006. But although the chorus of voices clamoring for General Mills to begin manufacturing the cereal once more have seemed quiet, that doesn’t mean the company wasn’t listening. “We have been overwhelmed by the consumer conversations, requests, and passion for the cereal to come back,” said General Mills marketing manager Waylon Good on the company’s blog. “We value our fans and are so excited to be able to bring it back for them.” Think they’ll bring back the classic French Toast Crunch commercials while they’re at it?

Really dedicated French Toast Crunch fans have been able to nab boxes from Canada, where it has remained in production under the French name “Croque Pain Doré”; it hasn’t been easy, though. As Grub Street noted, a single box usually goes for almost $25, plus the international shipping fees and “a veritable migraine of customs forms.” Now, though, you won’t have to jump through nearly as many financial or bureaucratic hoops to get your paws on the stuff: It’s actually available in select grocery stores right at this very minute, with nationwide distribution planned for January 2015.

Not going to lie: For me, the most exciting thing about French Toast Crunch wasn’t the fact that the cereal itself tasted like breakfast syrup. It was the way the individual pieces were shaped: Like tiny little slices of French toast. Please tell me I wasn’t the only one who occasionally ate them one piece at a time, pretending I’d zapped them with a shrink ray a la Honey, I Shrunk the Kids first. Anyone? Anyone? Bueller? Bueller?

In any event, it’s pretty clear that 2015 is shaping up to be a year of ‘90s junk food returns. What might be next? Butterfinger BBs? Magic Middles? Only time will tell!